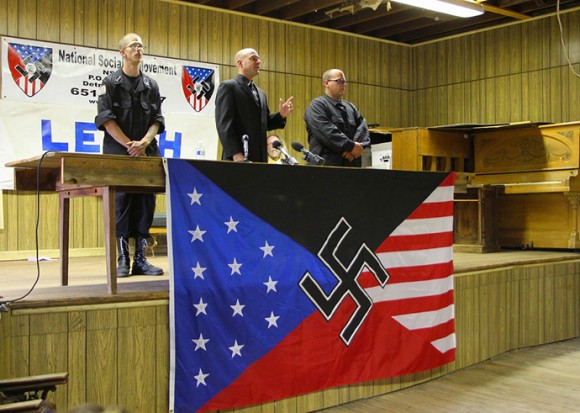 A White Nationalist Is The New White House Chief Strategist

Above Photo: Image from flickr.com user@uneditedmedia

Steve Bannon, who stoked the flames of alt-right fury while running Breitbart News, is headed to the presidential inner circle.

Steve Bannon, the Breitbart News Network executive chairman known for having white nationalist views ― and who has himself been accused of anti-Semitism ― was named chief strategist and senior counselor to President-elect Donald Trump on Sunday.

Bannon, 62, was taking time off from Breitbart to serve as CEO of the Trump campaign before Sunday’s announcement giving him a senior leadership role in the incoming administration.

“Steve and Reince are highly qualified leaders who worked well together on our campaign and led us to a historic victory,” Trump said in a press release announcing the appointments. “Now I will have them both with me in the White House as we work to make America great again.”

David Axelrod, who served as senior advisor to President Barack Obama during his first term, said via Twitter Sunday that picking Priebus over Bannon as chief of staff could signal Trump taking a more “conventional” approach, but later said that having Bannon in the White House at all was “deeply troubling.”

Bannon’s name appeared above Priebus’ in the release, suggesting his significance in the Trump administration could rival that of the chief of staff. A president’s top strategist and senior counselor typically control access to the president and help set and carry out his agenda.

At Breitbart, Bannon helped make the hardline populist website a go-to resource for white nationalists and the alt-right, according to the Southern Poverty Law Center, which monitors hate groups.

Breitbart served as a mouthpiece for the Trump campaign and an attack dogagainst conservatives like House Speaker Paul Ryan (R-Wis.) and Sen. John McCain (R-Ariz.) who were critical of Trump.

Breitbart has propagated conspiracy theories, like Planned Parenthood having Nazi ties or Clinton aide Huma Abedin being a spy for Saudi Arabia. The website traffics in misogynist and racist stories; it frames women who push back against harassment or gender bias as weak and incompetent and portrays people of color and immigrants as inherently criminal.

“It is easy to see why the KKK views Trump as their champion,” he added.

The SPLC and the Anti-Defamation League expressed concern over the appointment as well, with the ADL saying Bannon and “his alt-right are so hostile to core American values.”

Bannon’s road to the White House, like his boss’, was winding and unconventional.

Bannon was U.S. Naval officer before making a fortune from various media and banking investments. (He reportedly made a chunk of his wealth from “Seinfeld” royalties, having helped negotiate the show’s sale in 1993.)

Ben Shapiro, the former editor-at-large of Breitbart, has criticized Bannon as opportunistic and sinister.

“[Bannon] is a vindictive, nasty figure, infamous for verbally abusing supposed friends and threatening enemies,” Shapiro wrote in the Daily Wire in August.

Shapiro, who resigned in protest from Breitbart in March, predicted a plum role for Bannon if Trump won the election.

“Because Bannon’s ambitions extend to Steve Bannon, he’ll tell Trump he’s doing a fantastic job even if he isn’t,” Shapiro wrote. “That’s how Bannon Svengalis political figures and investors – by investing them in his personal genius, then hollowing them out from the inside.”

This story has been updated with statements from Sen. Harry Reid (D-Nev.) spokesman Adam Jentleson, the Anti-Defamation League and the Southern Poverty Law Center.