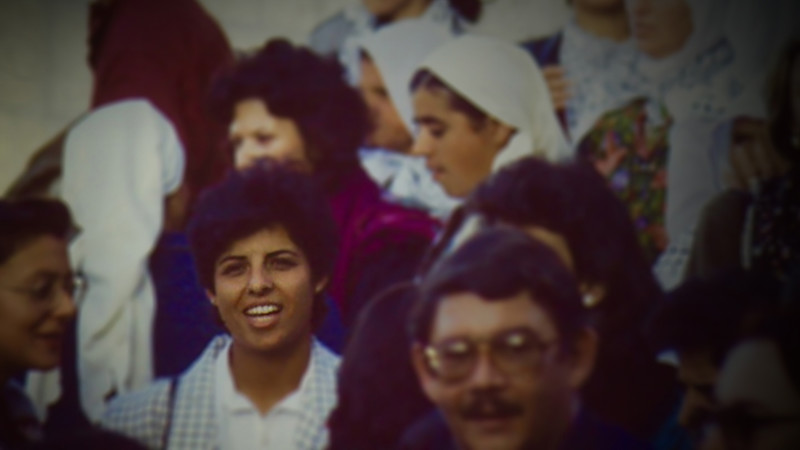 Above Photo: Naila Ayesh during  a demonstration. (Luisa Morgantini)

Naila and the Uprising, directed by Julia Bacha (2017)

Naila and the Uprising, the latest documentary by Brazilian filmmaker Julia Bacha, who previously directed the 2009 documentary Budrus, centers on the life of Naila Ayesh and how she came to resist the Israeli occupation in the West Bank and Gaza Strip.

Naila was imprisoned and tortured for her resistance, and upon her release organized women to lead the uprising known as the first intifada that began in 1987.

The film opens with a present-day scene of Naila looking through a photo album with her son Majd, who observes that asking someone to recall their past also means asking them “to relive it.” The viewer senses that this process will invoke painful memories, and indeed it does.

Naila recalls that she was 8 years old in 1967, when the Israeli military invaded and took control of the West Bank; one day a distant explosion could be heard while she sat in her classroom. Shortly after, her teacher announced, “The home of Ibrahim Ayesh has been demolished.”

Naila and her four siblings rushed home to find their father sitting in the ruins of their house. Naila recalls that she will never forget “how sad my father’s eyes looked.”

Bacha’s film is a portrait of both a truly remarkable woman and an entire generation of Palestinians with incredible courage, acute political acumen and unrelenting persistence.

By following Naila’s life, the documentary becomes both an individual and collective remembrance, charting the course of Palestinian resistance from the beginning of the 1967 occupation to the present.

Naila meets her future husband Jamal Zakout while studying in Bulgaria. When both return to Palestine, they choose “the same destiny, to resist the occupation.”

The couple joins the Democratic Front for the Liberation of Palestine at a time when Israeli repression was so severe it was a crime just to belong to a student union.

In a midnight raid in 1987, Israeli forces arrest Naila and imprison her in Jerusalem where she is interrogated, tortured and tied to a chair day and night for two weeks despite being pregnant. One night she is left outside in cold rain and miscarries.

Two Israeli journalists help publicize her plight and the result is a campaign that leads to her release on bail. Naila is freed just as the first intifada is beginning, shortly after several killings of Palestinians at the hands of the Israeli army bring the people of Gaza and the West Bank to the breaking point.

Some of the most powerful scenes in the film are archive footage of the massive uprisings that characterized the first intifada. Although the documentary Roadmap to Apartheid does a better job of reaching into the archives to demonstrate just how popular and widespread the first intifada was, the point is still driven home effectively in Bacha’s 76-minute film.

Naila and Jamal reach out to other activists in Fatah, the Palestine Communist Party and the Popular Front for the Liberation of Palestine in an attempt to bring organized leadership to the spontaneous bursts of outrage. They become part of what came to be unofficially known as the Unified National Leadership and begin issuing the famous underground communiqués that are distributed throughout the West Bank and Gaza, giving direction to the uprising.

The film clearly establishes that activists “weren’t waiting for leadership from abroad.” The Palestine Liberation Organization (PLO) was then headquartered in Tunisia after being ousted from Lebanon and was cut off from any possibility of leading the insurrection, which Israel responded to with indiscriminate force. Yitzhak Rabin, then Israel’s defense minister, brazenly warned Palestinians that “the longer the disturbances, the greater will be their suffering.”

Palestinian casualties rise into the thousands and arrests continue to mount. Jamal is seized just four days before Naila goes into labor with their son, Majd. Israel begins primarily deporting men, including Jamal. Naila is arrested and separated from her newborn, but after a protest campaign is reunited with him in prison.

It’s here that a central theme of the documentary becomes apparent as it explores the role of women who were previously denied political leadership positions, but now begin playing a paramount role in keeping the intifada going.

Impressive animation is utilized to convey how it was done, distributing bulletins in breadbaskets and disguising meetings as sewing circles. The use of animation also prevents the film from becoming just a succession of talking heads or newsreel clips and adds to the already high production standards.

The film convincingly demonstrates that a well-organized and massive boycott of Israeli goods, made possible by women in helping to create an underground economy, forces the Israeli government to negotiate.

The Palestinian economy relied overwhelmingly on Israeli goods, but with the boycott, Israeli firms began experiencing drastic declines in sales, leading to a proclamation by Israeli Foreign Minister Shimon Peres that the economy was “in danger.” Along with steadfast popular resistance, Palestinians demonstrated an ability to set up parallel state institutions, including clandestine classrooms after Israel closed schools and universities.

By the time negotiations begin in Madrid, Spain, in 1991, Naila makes the painful decision to accept a two-year exile so that she and Majd can be reunited with Jamal in Egypt. Israel still refuses to meet directly with the PLO; an independent delegation of local Palestinian intellectuals and leaders is instead selected to represent Palestinian interests in Madrid.

Unknown to them, however, PLO representatives were meeting secretly with Israeli counterparts in Norway and the Madrid negotiations were upended by the announcement of the Oslo accords.

The biggest failure of Oslo, the film argues, is that it allowed the occupation to continue and undermined a tougher negotiating stance taken in Madrid. It also led to a return of male dominance with the Palestinian Authority, including such Oslo provisions as requiring women to designate a “guardian” when applying for a passport.

The film ends with the conclusion that Oslo only worsened the occupation, leading to more checkpoints and a 140 percent increase in the settler population.

Naila and the Uprising, produced by Just Vision, belongs in the film libraries of every Palestine solidarity organization, along with other recent documentaries such as Fida Qishta’s Where Should the Birds Fly and Loretta Alper and Jeremy Earp’s The Occupation of the American Mind.