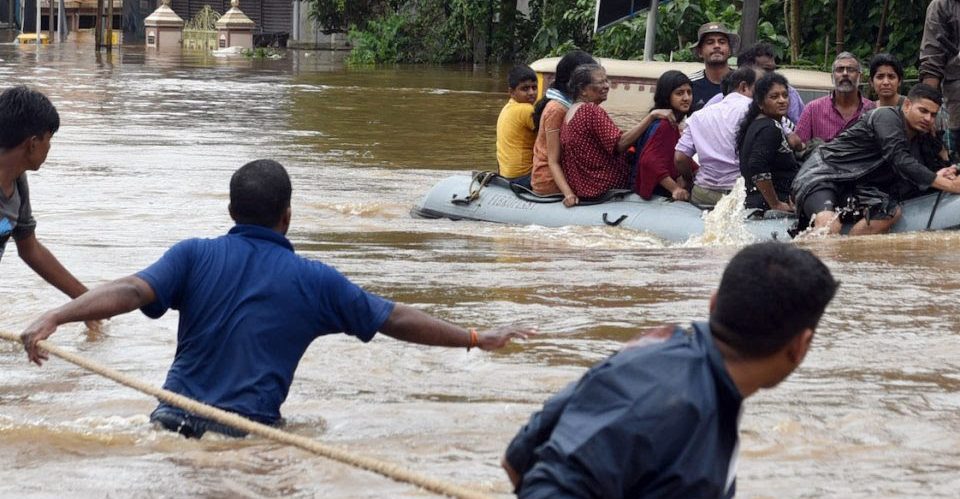 A World So Changed

Above photo: The picture above, from Aluva, was taken by RK Sreejith of the Times of India.

In May 1956, Chairman Mao Zedong swam across the Yangtze River. At age 62, it was quite a feat for the leader of the People’s Republic of China to do the 1.6 kilometre-wide swim. It took him two hours and he drifted about fourteen and a half kilometres downstream. Mao would do this swim several more times, once in 1958 and again in 1966. After the 1956 swim, when the Chinese authorities oversaw the construction of a bridge over the Yangtze River, Mao wrote a beautiful poem called Swimming. It is about the beauty of the river, the impressive bridge and the relationship of nature to humans. ‘Life – like the waters – rushes into the past’, Mao quoted Confucius. But then the bridge, a productive investment to make life less harsh – ‘Were the goddess still alive’, wrote Mao, ‘She would marvel at a world so changed’.

Over the past month, the Indian state of Kerala has struggled with the worst floods since 1924. Over three hundred people have been killed and millions of people have been affected in this state of about 35 million people. There are many theories as to why these floods have been so severe, climate change amongst them. But, what is certainly very clear is that in the face of this devastation, Kerala’s society came together to ensure the rescue and relief for those who had seen their worlds be torn asunder, and life ‘rush into the past’. Brinda Karat, Politburo member of the Communist Party of India (Marxist), provides the most comprehensive overview of the flood and what is to come. Karat honours the many years of social work and community building that have prepared the people of Kerala for their work in a time of crisis. ‘Who could not be moved by the voluntary rescue missions led by thousands of fisherpersons, who, taking their own boats, risked their lives in heavy rain and turbulent waters to save their fellow citizens?’, she writes. For more on the fisherfolk, see this by Joy Sebastian.

The Chief Minister of Kerala – Pinarayi Vijayan of the Communist Party of India (Marxist) – said as the flood waters receded, ‘Our aim is not merely a restoration of the State to pre-flood times, but to the creation of a new Kerala’. Karat had mentioned the long tradition of community building and cooperative activity in the state. One of those institutions is the Uralungal Labour Contract Cooperative Society (UCLLS), one of the world’s largest construction workers’ cooperatives (about which, please see this book from LeftWord Books written by Kerala’s Finance Minister T. M. Thomas Isaac and Professor Michelle Williams). UCLLS has already deployed its teams for rehabilitation work across the state. But more than that, the cooperative says that it will support the restoration needs of homes in Meloor and elsewhere – rebuilding homes and offering medical support. Two hundred volunteers, in twenty teams of ten, will begin to work immediately. These are the working-class heroes of our time. The goddess would indeed marvel at ‘a world so changed’.

From Tricontinental: Institute for Social Research‘s Delhi team, look for a dossier on the floods that wracked Kerala and the recovery effort. This will be out in October.

As this reconstruction comes on the agenda, the state government of Kerala will need to raise considerable resources. Where will it get this money? The Indian government has been stingy with its funds. The Indian rupee has begun to slide precipitously against the dollar – at an all-time low. India, South Africa, Argentina and Turkey all face the threat of major financial crisis as the US Federal Reserve Bank has raised interest rates and as dollars now flood back into the United States. Argentina has already gone to the IMF (in November, our Tricontinental: Institute for Social Research office in Buenos Aires will release a dossier on that transaction and its perils). What India and South Africa will do is not clear.

Meanwhile, Turkey’s Lira has slipped into dangerous territory. E. Ahmet Tonak and I have – as part of our research project on the contemporary world economy for the Tricontinental: Institute for Social Research – published a brief report on Turkey’s struggle to stabilise the Lira, the exposure of European banks and the threats of another global finance crisis. There are indeed shudders in the sinews of finance capital. A senior money manager in Wall Street tells me that Turkey might be a contained problem because the markets in the main centres (New York, Frankfurt, Tokyo, London) are in the midst of a ‘rolling bear market’ – namely, that they are shuffling the crisis from one segmented part of the market to another. Nonetheless, huge amounts of public and private debt will not be able to be paid down and collapses will occur. If the 2007-08 crisis began with the housing bubble, the current crisis will likely come from an explosion of the debt bubble. Turkey’s private sector will have to pay $220 billion this year to service its debts. Where that money will come from when the lira is in freefall is hard to imagine. The pain from this crisis is surely to be borne by the people of Turkey, of Argentina, of India, of South Africa – countries that borrowed dollar-denominated money.

The problem is compounded by the lack of any genuine aid money on the table, the ballooning debt overhang and a lack of options for growth due to a technology gap, as Jomo Kwame Sundaram (former United Nations Assistant Secretary-General for Economic Development) writes in a recent column. Jomo notes that as a result of the crisis afoot, affordable access to medicines is now down. Less than half of the public facilities in countries of the poor and less than two-thirds of private facilities in these countries have provisions of essential medicines. The social cost of these financial shenanigans is substantial and should not be forgotten.

Cracks in the global consensus are now evident. The German Foreign Minister Heiko Maas took to the press this week to call for the establishment of alternative global institutions to those dominated by the United States. The US-driven sanctions against Iran are the spur, but surely Maas must have in mind the financial threat posed to European banks by their exposure to Turkey’s crisis. Maas suggests that the Europeans create a European Monetary Fund and an alternative ‘good as gold currency’ to the US dollar. Europe, said Maas, should ‘form a counterweight when the US crosses red lines’.

Turkey, meanwhile, has taken the US to the World Trade Organisation for its tariffs, which Turkey says violates international trade agreements. So it goes, as conflicts intensify across the Atlantic. Alternatives exist, as Prabhat Patnaik suggests in our most recent dossier, which you can download and read here.

K. S. Jomo writes of the problems posed for health care as a result of the ongoing financial crisis. In Brazil, the coup government has over the past few years sliced away at whatever social protections had been created by the governments of Lula and Dilma. Programmes to get people out of poverty (Bolsa Família), to encourage environmentally conscious forms of poverty reduction (Bolsa Verde), to acquire food at reasonable costs and to build cisterns to help semi-arid regions have all been cut (for more on this, please read Anna Sophie Gross’ excellent report).

No wonder that the presidential candidates for the October election that have either institutional or ideological links to the coup government are struggling in the polls. Most recent polls show that Lula is in the lead, and that the Lula-endorsed slate of Fernando Haddad and Manuela D’Ávila (in case Lula cannot run) would easily defeat the establishment’s candidates. Why would a people – who have experienced a progressive government – turn their back on its policies and leap into the arms of devastation?

Prices of medicines are through the roof, support for anti-poverty means are being cut-back and of course education is threatened. This is the actual policy of most governments today, to take away what is necessary to enhance the public good and to put more social wealth into the hands of the quantitative traders who work in the algorithm markets. If you wonder what these are – these quant-traders and these algo-markets – then you are not alone. Financial markets are no longer run by human traders, but 80% of them are in the thrall of highly sophisticated computers that run programmes to game the system. The investment houses with the fastest internet connections, the best computer systems and the smartest computer programmers now win the game of money. Social wealth now zips through high-speed cables into the hands of the most powerful investment houses, who work – essentially – for smaller and smaller numbers of wealthier and wealthier people.

No wonder that schools in South Africa are falling apart, as Zandile Bangani reports for the New Frame. This is a normal situation for children in the poorer nations.

But worse for the Palestinian children, who have little access to education – their schools razed by Israeli bulldozers, their journey to school broken up by hostile Israeli checkpoints, their teachers disallowed from entering the moth-eaten Occupied Palestinian Territory. Please read my most recent report here. In time, Tricontinental: Institute for Social Research will release a dossier on the current situation in Palestine. Keep an eye out for that.

In Kerala, the Left Democratic Front government has pushed an agenda for the liberation of the transgender community – free sex change operations, quotas for public higher education, a Justice Board, the option for ‘intersex’ in all government forms, a taxi service owned and operated by transgender drivers and transgender ticket collectors in the Kochi metro. All this and more as the state moves towards an emancipated society. In light of these developments in Kerala, it is worth paying attention to the global history of the transgender community. Our Tricontinental: Institute for Social Research image of this week (see below) is of the transgender activist Marsha P. Johnson, a founding member of the Gay Liberation Front and the Street Transvestite Action Revolutionaries (STAR). Once, Johnson was asked why she was demonstrating. ‘Darling, I want my gay rights now’, she replied.