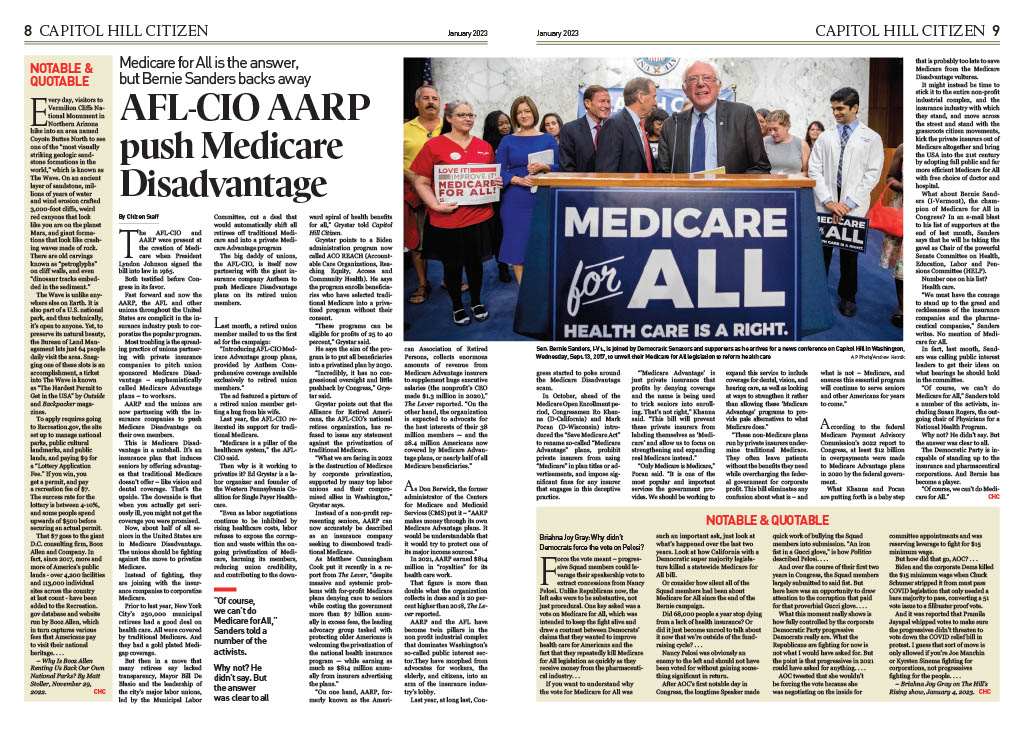 AARP And The AFL CIO Are Pushing Medicare Disadvantage

AARP and the AFL are now partnering with insurance companies to push Medicare Disadvantage – euphemistically called Medicare Advantage – on their own members.

That’s according to a report in the January 2023 issue of the Capitol Hill Citizen. (Print only. To get a copy go to capitolhillcitizen.com)

Medicare Disadvantage insurance plans induce seniors by offering advantages that traditional Medicare doesn’t offer – like vision and dental coverage. That’s the upside. The downside is that when you actually get seriously ill, the disadvantage is that when you get sick, you might not get the coverage you were promised.

Now, about half of all seniors in the United States are in Medicare Disadvantage. The unions should be fighting against the move to privatize Medicare.

Instead of fighting, they are joining with the insurance companies to corporatize Medicare.

The big daddy of unions, the AFL-CIO, is itself now partnering with the giant insurance company Anthem to push Medicare Disadvantage plans on its retired union members.

The ad featured a picture of a retired union member getting a hug from his wife.

Last year, the AFL-CIO reiterated its support for traditional Medicare.

“Medicare is a pillar of the healthcare system,” the AFL-CIO said.

Then why is the AFL working to privatize it?

Ed Grystar is a labor organizer and founder of the Western Pennsylvania Coalition for Single Payer Healthcare.

“Even as labor negotiations continue to be inhibited by rising healthcare costs, labor refuses to expose the corruption and waste within the ongoing privatization of Medicare, harming its members, reducing union credibility, and contributing to the downward spiral of health benefits for all,” Grystar told Capitol Hill Citizen.

According to the federal Medicare Payment Advisory Commission’s 2022 report to Congress, at least $12 billion in overpayments were made to Medicare Advantage plans in 2020 by the federal government.

“It might instead be time to stick it to the entire non-profit industrial complex, and the insurance industry with which they stand, and move across the street and stand with the grassroots citizen movements, kick the private insurers out of Medicare altogether and bring the USA into the 22 century by adopting full public and far more efficient Medicare for All with free choice of doctor and hospital,” the Citizen wrote.

What about Bernie Sanders (I-Vermont), the champion of Medicare for All in Congress?

In an e-mail blast to his list of supporters at the end of last month, Sanders says that he will be taking the gavel as Chair of the powerful Senate Committee on Health, Education, Labor and Pensions Committee (HELP).

“We must have the courage to stand up to the greed and recklessness of the insurance companies and the pharmaceutical companies,” Sanders writes.

No mention of Medicare for All.

In fact, last month, Sanders was calling public interest leaders to get their ideas on what hearings he should hold in the committee.

“Of course, we can’t do Medicare for All,” Sanders told a number of the activists, including Susan Rogers, the outgoing chair of Physicians for a National Health Program.

He didn’t say. But the answer was clear to all.

“The Democratic Party isincapable of standing up to the greed and recklessness of the insurance companies and the pharmaceutical companies,” the Citizen wrote.

“And Bernie has become a player.”

“Of course, we can’t do Medicare for All.”