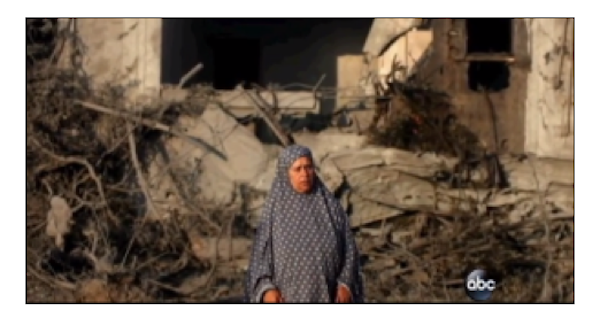 On July 8, ABC World News anchor Diane Sawyer gave viewers the latest on the violence in the Gaza Strip–by stressing the threat to Israel:

We take you overseas now to the rockets raining down on Israel…. And here an Israeli family trying to salvage what they can, one woman standing speechless among the ruins.

One problem: Neither of those images is an “Israeli family.” Both photos are from the Gaza Strip, and capture the aftermath of Israeli attacks.

I pointed this out to ABC World News on Twitter yesterday:

.@ABCWorldNews Your anchor misidentified a photo of people suffering in Gaza as “an Israeli family.” Correction? http://t.co/nEGygbIRHj

Thankfully, many others caught the same newscast, including Yousef Munayyer of the Palestine Center, which posted a video of ABC‘s embarrassing mistake. Journalist Rania Khalek wrote a piece for the Electronic Intifada (7/9/14) as well.

So an honest mistake, right? That’s one way of looking at it.

But there’s a pretty well-established pattern of corporate media trying to paint the conflict as between equals, a type of false balance that treats the threats to Israeli lives and Palestinians lives as similar. But at times it’s much more than that; this ABC report, and others like it, foreground the fear that Israelis are dealing with as sirens warn of incoming rockets from Gaza. “Running in terror as sirens wail” is how ABC correspondent Alex Marquardt began the segment right after Sawyer’s introduction. He conveyed Israel’s view of the conflict before shifting to life in Gaza.

At this point, the rockets targeting Israel have done very little damage. There are no reported Israeli deaths. But the fact that dozens of Palestinians had died, including several children, by the time ABC aired its report apparently did not cause them to consider this more newsworthy than Israeli fear.

The rocket attacks on Israel are treated as being more fundamentally important than the attacks being launched on Gaza. Sawyer’s introduction at the top of the broadcast was this: “On the brink: Rockets raining down on Israel. The Israelis trying to blast them out of the sky. And our reporter is there on the front lines.”

With that kind of set up, a newscast is bound to believe that the destruction they’re showing viewers must be in Israel–even though anyone who’s actually followed this story would know that the images show a level of destruction that is only happening in Gaza.

That’s why ABC‘s error should be seen less as a simple mistake, and more as a reflection of a worldview.