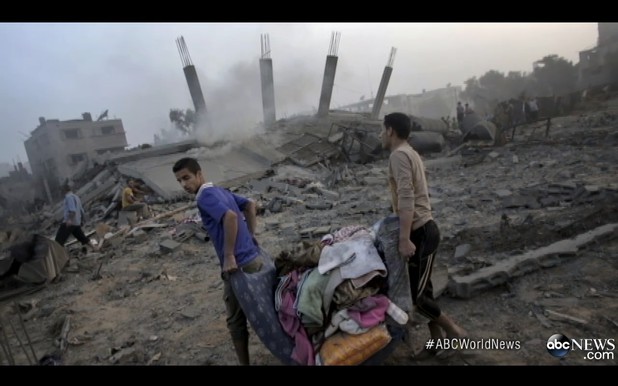 Above: Screenshot of ABC News image mislabeled as “an Israeli family trying to salvage what they can.” In fact the scene is in Gaza and is the result of Israeli bombs.

Netanyahu: Cease-fire with Hamas is not on Israel’s agenda

More than fifty Palestinians have been killed and another 450 wounded since Monday in Israel’s ongoing assault on the besieged Gaza Strip, dubbed “Operation Protective Edge” by the Israeli army.

As usual, mainstream media outlets are straining to paint Israel as the victim, defending its people against irrational Palestinian rocket fire.

There is no equating the killing and maiming of dozens of innocent Palestinians with scared Israelis seeking shelter from crude rockets that rarely cause damage. But that hasn’t stopped media outlets from trying, and in some cases, outright lying, to distort the violence.

In one stark example, ABC News’ Diane Sawyer misidentifies scenes of the aftermath of Israeli missile strikes in Gaza as destruction caused by Palestinian rocket fire.

As Sawyer segues into the segment, she says, “We take you overseas now to the rockets raining down on Israel today as Israel tried to shoot them out of the sky.” Next to her is video footage not of Israelis or even Israel, but of Israeli airstrikes on Gaza.

Sawyer then incorrectly describes an image of a Palestinian family gathering belongings in the smoking debris of a missile-hit home in Gaza as “an Israeli family trying to salvage what they can.”

Screenshot of ABC News image mislabeled as “an Israeli family trying to salvage what they can.”

Sawyer then describes an image of a Palestinian woman surrounded by destroyed homes as “one woman standing speechless among the ruins,” with the implication that she is Israeli.

Sawyer’s bald misreporting reflects either a deliberate lie by ABC News or willful ignorance so severe that Palestinian death and misery is invisible even when it’s staring ABC producers right in the face.

The segment in its entirety can be seen here.