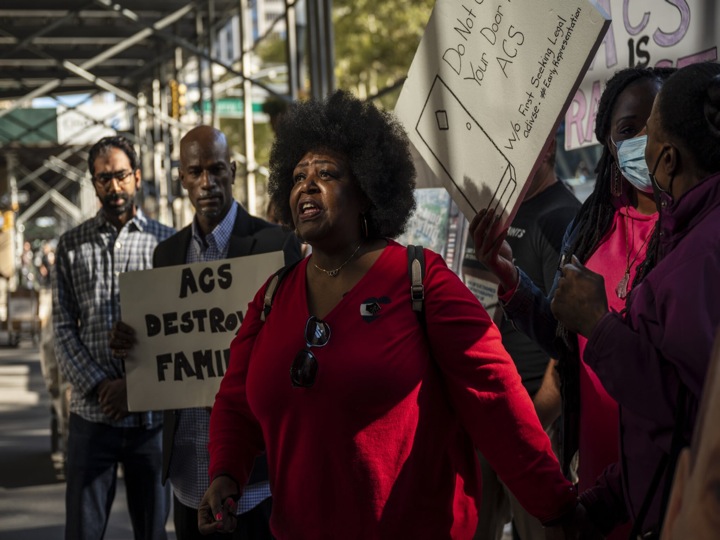 An Interview with Joyce McMillan.

Roberto Sirvent: Can you please share a little about how you got into organizing and what movements you’ve been involved in?

Joyce McMillan: My passion for the fight to abolish oppressive policing systems – especially the family policing system (also known as the “child welfare system”) – is fueled by my personal experience of having my two children ripped from me in 1999. The two and a half year fight to regain custody, the many additional investigations after my children were returned to me and my learning through research what communities were being impacted by the family police and outcome of the children they claim to protect. The family policing system can completely destroy people’s lives. After I reunited with my children, I knew other parents and families were experiencing the same harm I had experienced, and I knew I had to do something to change that.

Family policing takes place under the narrative that the state acts to protect children – this is an extremely powerful narrative. It can be extremely hard to shift understanding from “the system protects children” to “the system separates (largely) poor, Black and brown families.” Many do not believe it until they see it. We can see that a similar narrative happened regarding the criminal legal system, and it took SO much work on the part of many activists, organizers, and advocates – especially impacted people – to make that narrative shift regarding prisons and police. That same work must be done regarding family policing.

What is so important to understand about family policing is its position as a system in which all the forms of policing and oppression come together: if a family is houseless, children can be removed. If a parent is serving a prison sentence, their rights can be terminated. Parents are asked about their immigration status under investigation by family policing agents. These are just a few examples that skim the surface – the policing of poverty in the US, especially of Black and brown families, intersect all of these systems. In order to reach true liberation, we must abolish all such systems oppression and policing.

You’ve been a strong advocate of a Child Welfare ‘Miranda Rights’ Law. Why is this such a significant issue to fight for?

When my two children were ripped from me, the investigators took advantage of the fact that I did not know my rights. I have met countless other parents who were in similar positions. How can you enact your rights if you do not even know what they are to begin with? Some say that even with a Miranda-type warning for parents, that doesn’t change the fact that family policing agents will still interrogate and manipulate parents during the investigation, which I agree with – but we must begin somewhere, and I believe that such a bill begins a conversation on a national scale to shift the narrative to reflect reality: family policing does not keep children safe. Data shows that keeping families together is the best way to keep children safe and for them to have the best outcomes as well.

What are some of the concrete material needs expressed by parents, children, and families impacted by the punitive child welfare system?

The first is their right to be told what rights they have as parents while trying to keep their family intact. Second to that are concrete material basic needs, including (but certainly not limited to) food, transportation, money for laundry and detergent, someone to support them with their concern who won’t report them, diapers, accessible and affordable child-care, child-care outside of the typical 9-5 hours, and support so that they can sometimes have a moment to themselves after work hours. Again, this is just the tip of the iceberg, but it’s a good place to begin. Overall, parents need real, concrete, material community support built on trust and care, not surveillance and policing.

What we envision from changing the mandated reporting training is preventing the net from being cast wide, which is the main cause of families becoming entangled in the family policing system for reasons that are not related to abuse or any purposeful harm to a child. The ability to provide resources would prevent the system from being overwhelmed with unnecessary cases and protect families from intrusive and abusive interrogations and searches that can lead to the separation of families for reasons related to poverty. The system has the funds to supplement a family’s needs but chooses to spend that money on foster placements outside of the home instead of strengthening the family of origin. The family policing system does not have services or resources; they contract everything out. So, why not allow the referrals for assistance/support to be provided on the front end of the need and not after the interrogation and separation of the family.

How can BAR readers support your work?

BAR readers who are in New York State can support by supporting our current legislative efforts:

Miranda (Know Your Rights) – they can call Jabari Brisport (Senate Sponsor), Latrice Walker (Assembly Sponsor) – Families face an intrusive, traumatizing experience when CPS/ACS (the administration for children’s services) knock on their door – families are never advised of their rights, including their 4th amendment right to not let a government official into their home without a court order. The investigations lasts for up to 60 days and at no point during the investigation is the family informed of their rights. During the investigation child protection agents come to homes unannounced, strip search the children claiming to look for marks and/or bruises, search medicine cabinets, garbage cans, refrigerators, coerce parents to sign blank HIPPA forms etc. Anyone being investigated and at risk of losing their children should at minimum know their rights during the investigation.

Informed Consent – Julia Salazar (Senate Sponsor), Linda Rosenthal (Assembly Sponsor) – To prevent prenatal and postpartum drug testing as a stop and frisk of bodily fluids – but to test only if there is a medical need. This will prevent unnecessary separation of newborns from their parents and the feeding of children into the child welfare/family policing/family regulation system. If it is believed someone is experiencing a reliance on a substance, the hospital setting is the place to address it.

Confidential Reporting (Anti-Harassment)- Jabari Brisport (Senate Sponsor), Andrew Hevesi (Assembly Sponsor) – To remove the reporting of family from anonymous to confidential.  The family who is reported will not know who called but the State office that they call can keep a record to prevent disgruntled people from weaponizing the system against families. The overwhelming majority of cases called in anonymously are found to be false reports. Many times the caller is an ex-spouse trying to get the upper hand in a custody case or the perpetrator of Domestic Violence.

They can support by contacting the sponsors of the bills or the local elected officials and advising them to co-sponsor the legislation. Readers outside of NY can also begin copying the same legislation and working to keep families in their respective states safe. They can attend rallies and other actions or make a donation to support the work of JMacForFamilies. To learn more, visit www.jmacforfamilies.org .