Abortion Providers Fear For Their Safety As Rhetoric Ratchets Up

Above Photo: From Huffpost.com

Abortion clinics and their staff are on high alert as the anti-choice movement steps into high gear.

A few weeks ago, Jen Villavicencio, an OB-GYN in Michigan, Googled her name. There, on the results page, was an anti-choice website that identified medical professionals working in the “abortion cartel.” Her name was on the list.

The site had posted several photos of her, stripped from social media, along with her work phone number and the city where she practices. Villavicencio wasn’t surprised; ever since she started providing abortions six years ago, she’d expected to be targeted online.

But when her husband walked up behind her and saw the photos on her computer screen, he sat down and began to cry.

“We had a two-hour long conversation about what this meant and what’s going on in the general political environment, and what we’re doing to keep ourselves safe,” she told HuffPost recently. “He’s feeling powerless to protect our family, but simultaneously wanting to support me, because he believes wholeheartedly in the work that I do.”

As a re-emboldened anti-abortion movement has emerged, buoyed by recent legislative victories in Alabama, Georgia, Ohio, Kentucky, Mississippi, Missouri, Utah and Arkansas, those who work to protect abortion rights are on high alert for their safety.

Anti-abortion activists and lawmakers believe the time is ripe to overturn Roe vs. Wade, and rhetoric opposing abortion has gone into overdrive. Even President Donald Trump has chimed in with unscientific and dangerous claims about abortions later in pregnancy.

The National Abortion Federation, an organization that tracks violence against abortion providers, found that trespassing, obstructing patients from accessing care, and harassing phone calls all steeply increased in 2017, the latest year for which there is data. Providers reported 62 death threats or threats of harm in 2017 ― up from 33 the year before.

Abortion providers who spoke to HuffPost said there is little they can do to increase security at their clinics, most of which already have robust safety measures in place, such as security guards and surveillance systems.

But in the digital age, doctors and staff also have to worry about keeping their personal information offline. At a conference for family planning specialists and OB-GYNs last week, Villavicencio said she had countless conversations with attendees who were newly strategizing how to erase their digital footprints, as well as discussing how to protect their families.

“People were feeling nervous,” she said. “The threat is ever-present.” 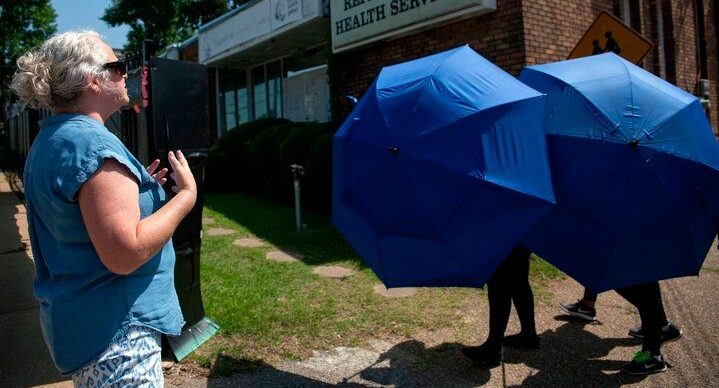 SETH HERALD VIA GETTY IMAGES
An anti-abortion protester shouts as a woman is escorted into the Reproductive Health Services building in Montgomery, Alabama, on May 20, 2019.

Hales said she holds security meetings quarterly with her staff. One of their biggest concerns is social media, she said. Not all of her clinic workers are “out,” meaning they speak publicly about their work. But some of them are actively advocating for abortion rights online, which opens them up to threats and harassment.

“In those situations, we do have to focus on how they can remain safe online,” she said.

At least one clinic has experienced an act of violence this month.

On May 7, a clinic escort was hit by a car outside the West Alabama Women’s Center in Tuscaloosa. Helmi Henkin, an organizer with the Yellowhammer Fund in Alabama, which helps people access safe abortions, witnessed a man back his SUV into an escort who was standing in the parking lot. The escort had to receive emergency medical care, she said.

“He wasn’t even a protester,” Henkin said. “He was just a member of the community who had been empowered or inspired by these [anti-abortion activists] to start coming and taking his anger out on us.”

Henkin, who has volunteered as a clinic escort since 2016, said she has a list of names and faces of people who have threatened to commit violence that she keeps either in her car or in her pocket so she can be on the lookout. This is a common tactic for volunteers and people who work at abortion clinics. They have to stay vigilant.

“I’m always aware that there is a risk of violence,” Henkin said. “But stuff like that just serves as a reminder that we are putting our lives on the line out there.”

David Cohen, a law professor at Drexel University and co-author of “Living in the Crosshairs: The Untold Stories of Anti-Abortion Terrorism,” said that any time abortion is in the news, providers are hyper-aware of threats of harm.

He noted that the 2015 deadly shooting at an abortion clinic in Colorado Springs came on the heels of abortion opponents releasing a series of deceptively edited videos of Planned Parenthood officials discussing fetal organs, and the 2009 murder of Kansas doctor George Tiller came after he was acquitted of charges of performing illegal abortions in a high-profile trial.

For Villavicencio, finding herself listed on an anti-abortion website only served to make her more committed to helping those in need, despite the strain it puts on her family life.

“It did make me take a step back and think about what this means for the people that I love the most,” she said. “I feel fortunate to have somebody in my life who is willing to take on that emotional burden so that I can work to make the lives of women in this country better. But it’s a really heavy lift.”

Having the president make inflammatory comments about abortion doesn’t help anything, she added.

“I’ve got people that scream murderer me, every time I drive to work,” she said. “As common as it is, it doesn’t make it easier.”