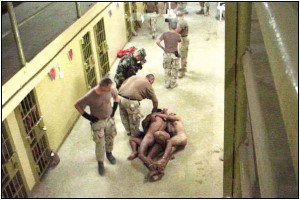 A federal judge on Wednesday ordered four Iraqis who were imprisoned at the infamous Abu Ghraib prison to pay nearly $14,000 in legal fees to defense contractor CACI, an Arlington, Va.-based company that supplied interrogators to the U.S. government during the Iraq War.

The decision in favor of CACI stemmed from a lawsuit filed by the former prisoners in 2008, alleging that CACI employees directed the torture of prisoners at Abu Ghraib. The suit was dismissed in June, when U.S. District Judge Gerald Bruce Lee ruled that because the alleged acts took place on foreign soil, CACI was “immune from suit” in U.S. court.

Lee did not, however, directly address the question of whether CACI employees took part in the mistreatment of prisoners. The treatment of detainees at Abu Ghraib exploded into an international scandal in 2004, when shocking photos emerged of prisoners being stacked on top of each other, threatened with dogs, and sexually abused.

A little over a month after winning the dismissal this summer, CACI requested that the former prisoners be ordered to pay $15,580 to cover the company’s legal expenses.

Lawyers for the Iraqis disputed that their clients should pay CACI’s bills, partly because the Iraqis had “very limited financial means, even by non-U.S. standards, and dramatically so when compared” to CACI, according to a court filing. Moreover, they wrote, the initial claims against CACI, involving “serious claims of torture, cruel, inhuman and degrading treatment, and war crimes were dismissed on very close, difficult — and only recently arguable — grounds.”

Attorneys for the Iraqi prisoners have said they plan to file an appeal of the June dismissal this fall.

CACI did not respond to a request for comment on the ruling.

The massive defense contractor has long denied allegations that its employees abused or directed others to abuse prisoners at Abu Ghraib. A statement on CACI’s websitenotes that “Neither CACI nor any of its employees have been found or proven to be involved in” or “participated in” or “charged” with abuse, nor have they been indicted for “directing abuse.”

In 2008, CACI’s executive chairman, J. Phillip “Jack” London, wrote a book in defense of the company titled Our Good Name: A Company’s Fight to Defend Its Honor and Get the Truth Told About Abu Ghraib.