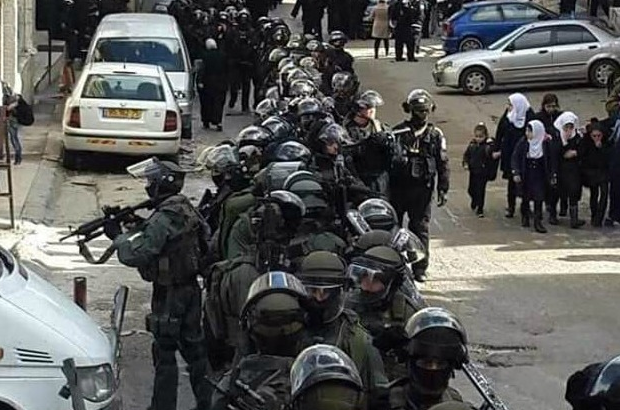 Abusive US Cops Learning Even More Abuse From Israeli Police

Praising Israeli security forces as “the best” in counter-terrorism, a group of 15 senior U.S. police officials just came back from studying Israel’s occupation-and-counter-insurgency-style policing – complete with militarized gear, tactics and mindset – in hopes of emulating their expertise in racial profiling, excessive force, mass incarceration, collective punishment and other human rights abuses. The Americans, including several big city police chiefs, sheriffs and US Customs and Border Protection personnel, met with elite units from the Jerusalem Police, border police and Israeli Security. This trip was sponsored by the U.S. Jewish Institute for National Security Affairs (JINSA), a security think tank that works primarily with military personnel; similar training trips have been organized in recent years by the Anti-Defamation League (ADL) and the American Jewish Committee’s Project Interchange.

Delighted police spokesman say it’s a logical collaboration: Israel, which tends to “roll out the red carpet for us,” is “on the forefront on the fight against terrorists; both Israel and the U.S. feel they are fighting a new class of “crimiterrorists” that blur the line between terrorists and criminal troublemakers; and “Israeli National Police operate in a democratic society very similar to police departments in the US.” Also, Israel is already using a lot of the same military and crowd control equipment – from weaponry to tear gas and stun grenades – that we sell them, and likewise use in pesky areas like Ferguson. Plus, the trips serve as a convenient “indoctrination conveyer belt”; boasts one organizer, officers who take part “come back and they are Zionists.” Win-win.

Except, actually, not. Critics note that American police are learning from an apartheid state’s so-called justice system that deals not with Jewish residents of equal stature, but with a Palestinian population living in what is essentially a giant prison camp, with almost no rights, whose daily lives it controls through paramilitary and counterinsurgency tactics. The training programs “seek to reframe Israel’s conquest of Palestine as a campaign of law and order for US law enforcement to emulate,” a narrative that “positions Palestinians not as dispossessed and stateless, but as a pathologically dangerous population that must be controlled and pacified with brute force.”

Rashid Khalidi, the Edward Said professor of Modern Arab Studies at Columbia University and a longtime critic of the occupation, argues the exchange makes perfect, awful sense: “If American police and sheriffs consider they’re in occupation of neighborhoods like Ferguson and East Harlem, this training is extremely appropriate – they’re learning how to suppress a people, deny their rights and use force to hold down a subject population.” This week, Israel again proved their expertise in those areas: Practising the collective punishment that’s illegal under international law but still a favorite tactic, over 1,000 Israeli soldiers stormed the Shuafat refugee camp in East Jerusalem to demolish the house of a Palestinian man who last year killed two Israelis with his car. His widow and five children lived there. Another teachable moment for our boys in blue.

terday in a major operation more than 1,000 Israeli forces crowded the streets of Shuafat Refugee camp in East Jerusalem to demolish by explosion the family home of a Palestinian who killed three and wounded 14 in a car ramming attack in November 2014, causing clashes between residents and Israeli police.

While the demolition was in progress Israeli forces closed all entrances into the camp and roads inside of the congested neighborhood. Ambulances were prevented from driving into the area to retrieve patients wounded with rubber bullets in unrest until the Israeli army left the camp, Red Crescent spokesperson Erab al -Fuqaha told Mondoweiss.