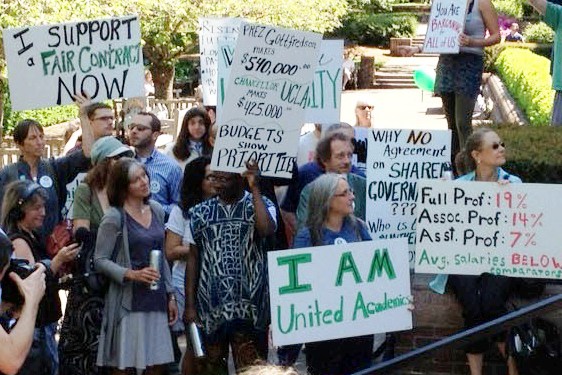 Academic Sweatshop: My Life As An Adjunct

When I was 19 years old, a college professor changed my life. I took his Feminist Political Thought course and realized for the first time that I could be smart and capable. I decided I wanted to give students what he had given me. I talked to professors about what it was like to teach college and it seemed perfect. There would be time for artistic and intellectual work, a chance to foster curiosity and critical thinking, building community, freedom to work a flexible schedule mostly from home, good wages and benefits, and opportunities to contribute to research.

I knew this course would also make my family proud. I come from a long line of working-class union employees who spent their lives in tobacco factories, brickyards, construction, and working for the state. They had little choice of jobs and stayed with them until they retired. They were paid decent wages and benefits, but they wanted me to have better options — to do something I actually enjoyed — and I was excited for them as well as myself.

No one ever mentioned the word “adjunct” and I didn’t know what it meant until I took my first teaching job at a community college. I thought an adjunct position was probably a trial period for a full-time post that was sure to open soon. I was still full of hope for my career.

Today I have classes that run four, five, six, 12, and 16 weeks long at three to five different schools. I work more hours than a full-time college professor, yet I get paid less than half as much. I work so many hours that I sometimes average less than the minimum wage.

My pay can sound good based only on class hours. But of course, there is much, much more involved in being a good teacher than class time. I sometimes spend 40 hours in a week to prepare for one new course. Grading, prep work, and continuing education efforts often vary from 10 to 30 hours per class.

The situation is even bleaker at for-profit schools, which use us like work horses. At one school, new classes start every month and I grade about 300 writing assignments per week! I’ve worked 90 hours a week, 15 hours a day many times to get the job done.

Adjunct work is unreliable and inconsistent, making it nearly impossible to budget and plan for the future financially. I never know what I will be teaching and am often expected to prepare for a new class in less than a week. Colleges will often revoke a contract if the class doesn’t have satisfactory enrollment.

I am working hard and not seeing tangible fruits for my labor. I can’t afford health insurance, even under the Obama plan; and I have nothing saved for retirement. I can’t pay my student loans and barely manage to pay basic living expenses. Occasionally I get warm fuzzy compliments from students who become passionate about what they learn from me, but mostly my poor students get a tired, overworked, unenthusiastic teacher who has to try hard to “fake it until I make it.” Why do I keep doing this? Simply because it was my dream to teach college.

But after seven years of struggle, I have had to admit that academia is a sinking ship. It is no longer a middle income job with a promising future, but a field that pays poverty wages and increasingly runs schools like corporations, where the dollar comes before both students and employees.

Seventy-six percent of instructors are part-timers and earn an average of $25,000 a year compared to $72,000 a year for full-time professors. Universities are following the nationwide trend in many industries toward cutting full-time jobs in favor of part-time, contract, and temporary positions that offer less pay and no benefits.

Adjuncts are not without hope, however. Thousands are organizing around the country in unions like Service Employees International (SEIU). However, my state, Kentucky, has no such efforts going on. So, many of us struggle on, hoping to beat the odds in the competition for full-time positions that may be offered every few years or so.

Adjuncts can shake things up and galvanize change by urging their local unions to start organizing. Better wages and benefits would take away the incentive for adjunct positions and hopefully encourage universities to employ more full-time teachers. But, as the history of capitalism has shown us, we have to fight for it.

Nicole Troxell is a sociology instructor and community activist in Louisville, Ky. Send her feedback at ndtrox01@yahoo.com.