Above photo: Protests in Honduras intensify as president is implicated in drug trafficking. The Real News.

“Former President Lobo and current President Hernández — whom the United States had backed and is currently supporting — are both alleged to have close criminal ties, in addition to having allegedly accepted bribes from drug traffickers to help fund political campaigns in exchange for protection and other benefits, among other corruption allegations.”

As long as the U.S./ Canada/ European Community maintain full relations with this “democratic allie” (the repressive, drug-trafficking and utterly corrupted Honduran regime), the drugs will continue to flow, tens of thousands of Hondurans will continue to be forced to flee home and country every year, and North American politicians, government officials and international relations ‘experts’ will continue to pretend they don’t understand why so many refugees are fleeing. 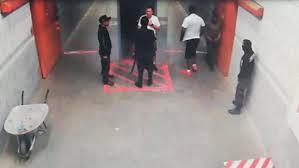 The moment before his death. Nery López Sanabria is in discussion with prison guards.
Moments later inmates armed with a gun and knives burst through the red sliding door on the left. Crédito: Univision

Shortly before 10:30 on Saturday morning, suspected drug trafficker Nery López Sanabria chatted with a pair of uniformed security guards in a hall inside a maximum-security prison in western Honduras. Dressed in a white t-shirt and black gym shorts, López Sanabria can be seen on a security camera as one of the guards, wearing a hood, walks to a red, metal prison door, dangling keys.

A few seconds later the heavy door slides open and the masked guard steps aside. A brutal and horrific scene ensues. Out leaps a prisoner with a gun who quickly unloads the entire cartridge at López Sanabria.

The violent spectacle comes barely a week after a U.S. federal court in New York found Juan Antonio ‘Tony’ Hernández guilty on four counts of drug trafficking and related weapons charges. Ledgers that were confiscated from López Sanabria during his June 8, 2018 capture in Honduras were key evidence in the conviction of Hernández, and could potentially implicate his brother, President Juan Orlando Hernández.

Although US officials were able to obtain the ledgers and present them as evidence, it is not clear if U.S. officials tried to obtain testimony from López Sanabria. The U.S. Department of Justice wrote a letter to the head of the Honduran prosecutors office in April, requesting “the duly authorized custodian of records to provide copies of the investigative records, evidence, and reports,” pertaining to the capture of López Sanabria.

Besides the actual drug ledgers, it is not clear how much information was provided to U.S. officials. Nery Orlando Lopez Sanabria was captured in June 2018 in Honduras with drug ledgers that implicated Tony Hernandez. At the time of his arrest, Lopez was believed to be one of the largest drug traffickers in Honduras.

Prison fight or a “hit”

The first official reports of the murder cited a prison fight as the cause. But within hours, a graphic video of the killing began circulating on social media that debunked the claim. The sequence of events depicted in the video demonstrate all the tell-tale signs of a coordinated hit.

Government critics suggest that López Sanabria was murdered to avoid any chance that he might cooperate with U.S. prosecutors and that the brutality of the caught-on-camera scene was intended to send a message.

Lawyers for López Sanabria are blaming the government for his death, saying they repeatedly requested that he be transferred to a military jail due to death threats. “That there was conspiracy is a fact, it can’t be denied,” said Carlos Chajtur, a lawyer for López Sanabria who spoke to Univision News.

“We are talking about a maximum security prison, practically impregnable,” he said. “Anyone who visits has to go through a series of security screens including a full body scan to verify that you’re not carrying any type of illegal material or artifact,” he added. “He was killed with knives and guns … these weapons did not enter the prison all by themselves. Someone had to bring them in, and that someone has to be part of the authorities,” he went on.

President Hernández has vigorously denied any links to drug trafficking, and has called the accusations that surfaced in the New York trial against him and his brother were a fairy tale of lies worthy of ‘Alice in Wonderland.’

The government announced it is investigating the killing and has suggested an alternative motive. “The President has asked the Public Prosecutor for a thorough investigation because there are reasons to suspect that it was directed in the interest of drug traffickers [who testified against Tony Hernández] , given that according to his lawyer, [López Sanabria] was in a position to prove the notebook used in [the New York trial] are fake,” said deputy Minister of Security, Luis Suazo, in a tweet early Sunday morning.

Lawyers for López Sanabria denied that versión to Univision saying government officials had offered to transfer their client “in return for denying the drug ledgers.”

Before the trial, lawyers for Lopez Sanabria say their client was visited without their prior knowledge or authorization by a Miami private investigator, Chase Lalani, who was employed by the Hernández family. Others who were approached by Lalani say he misrepresented himself as working for the U.S. government. Lalani denied misrepresenting himself during a brief conversation with Univision in New York.

Prosecutors presented the drug ledgers in court on the second day of the Hernández trial earlier this month. An anti-narcotics agent from Honduras testified that he discovered the ledgers inside a hidden compartment in a vehicle seized during the capture of López Sanabria. The prosecutors presented several pages in court, including one that supposedly detailed a cocaine shipment of 650 kilos and listed someone named “Tony Hernandez.”

Univision obtained a complete copy of the ledgers, that runs to over 350 pages, and detail mundane expenses, such as the upkeep of a ranch, as well as what prosecutors say are numerous large-scale cocaine shipments. The validity of the ledgers was confirmed by Chajtur to Univision two weeks before the trial.

Univision also obtained a copy of the official arrest report which mentions nine notebooks, along with $200,000 in cash and several guns.

Besides numerous mentions of “Tony,” the ledgers also list payments to a person identified as “JOH,” which are the initials and primary nickname of President Juan Orlando Hernández.

The lawyers for López Sanabria declined to say if their client explained to them before his death if the initials in the narcolibretas do indeed refer to the Hernández brothers.

When López Sanabria was captured, he carried an id card with the name of Magdaleno Meza Funez. Years earlier he had faked his own death through a bizarre scheme that involved photos of him lying in a coffin, a falsified death certificate and the new ID card issued to him by the national registry. He reportedly also underwent plastic surgery to alter his appearance.

At the time of the arrest, López Sanabria was considered one of the largest drug traffickers in Honduras. U.S. prosecutors revealed that he had previously worked with confessed drug traffickers Víctor Hugo Díaz Morales, alias ‘El Rojo,’ and Devis Rivera Maradiaga, head of the infamous Cachiros crime family, both of whom are in U.S. custody and testified against Tony Hernández in New York.