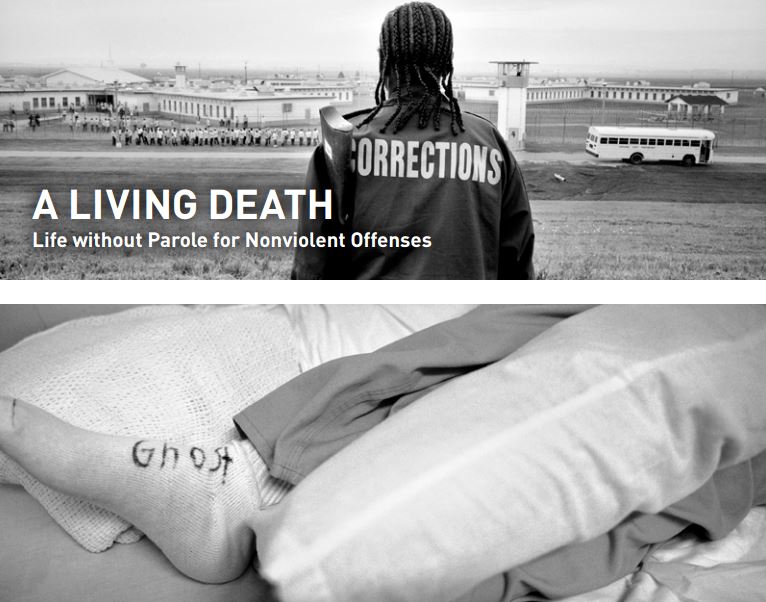 ACLU: 3,278 In Prison For Life For Nonviolent Offenses

Report: A Living Death, Sentenced to Die Behind Bars For What?

The ACLU has published a report that shows  3,278 people are behind bars for life for nonviolent offense. They write; “it was nonviolent offenses like stealing a $159 jacket or serving as a middleman in the sale of $10 of marijuana. An estimated 65% of them are Black. Many of them were struggling with mental illness, drug dependency or financial desperation when they committed their crimes. None of them will ever come home to their parents and children. And taxpayers are spending billions to keep them behind bars.”  What kinds of offenses? The report tells the story of people behind bars for life for stealing tools from a tool shed, carrying drugs for an abusive boyfriend, taking a wallet from a hotel room, having someone hide drugs in their home, borrowing a co-workers truck.  They tell the stories of these  people to put a human face on the 3,278 who will die in prison for minor, nonviolent offenses.

People as young as 18 will spend the rest of their lives behind bars for crimes where no one was injured. Mothers and fathers will be separated from their kids forever. People convicted of their first offense will be permanently denied a second chance. Many young Black and low-income men and women will be locked up until they die. And taxpayers will spend billions to keep them behind bars.

As the new ACLU report “A Living Death: Life Without Parole for Nonviolent Offenses” reveals, the failed, and outdated approach of applying extreme sentences to minor property and drug crimes has reached absurd, tragic and costly heights.

Among the other people serving life without parole for nonviolent offenses are veterans and other addicts struggling with drug dependency. Others spiraled into drug addiction when they could not find work, and some began selling drugs to pay the bills after they lost their jobs or to pay off medical debts incurred when they were uninsured. Some are mentally ill. An estimated 65% percent of them are Black. Seventy-nine percent of them were convicted of nonviolent crimes connected to the failed War on Drugs. And now, behind bars, many of them told the ACLU that they struggle with depression and suicidal thoughts, knowing that there is no hope of ever going home.

These people’s problems — poverty, mental illness, drug dependency — were not solved by sending them to prison until they die. And most of the nonviolent crimes for which these prisoners are serving life without parole would be more appropriately addressed outside the criminal justice system altogether, by providing drug treatment and mental health resources.

Watch this video and help us fight extreme sentences for nonviolent crimes.