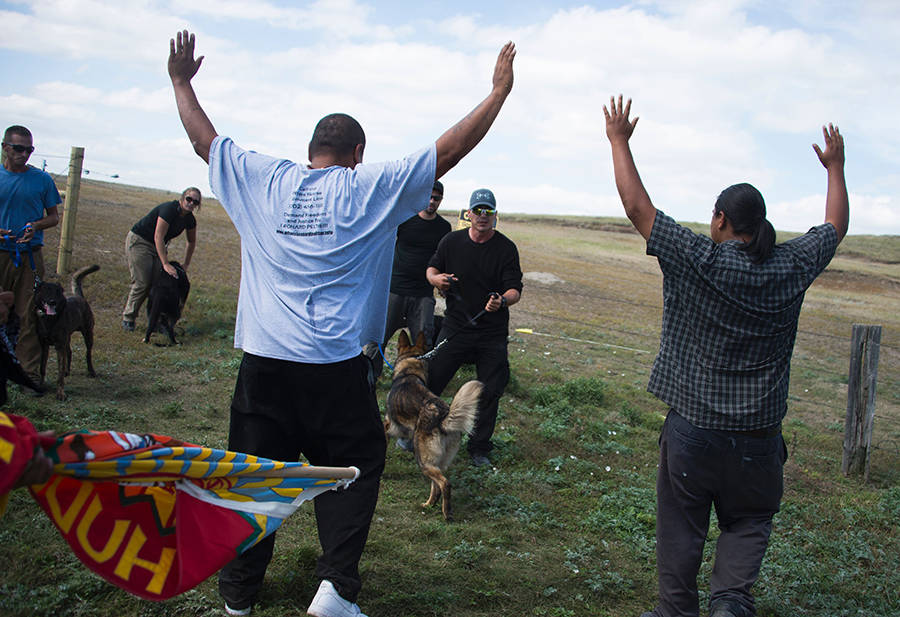 Above Photo: Native American protestors were confronted by security and armed law enforcement during demonstrations in 2016 against the Dakota Access Pipeline. Credit: Robyn Beck/AFP/Getty Images

The Keystone XL pipeline is expected to draw protests from indigenous and environmental activists when construction begins, and many activists are worried law enforcement agencies may be planning surveillance and a militarized response. Now, the American Civil Liberties Union is accusing federal agencies of trying to hide the extent of these preparations, which the group says are clearly underway.

The ACLU and its Montana affiliate sued several federal agencies this week, including the Departments of Justice, Defense and Homeland Security, saying the agencies are withholding documents that discuss planning for the expected protests and any coordination among state and local authorities and private security contractors.

Fears about the law enforcement response follow the 2016 armed crackdown on people protesting the Dakota Access Pipeline, where authorities used tear gas and turned water cannons on protesters in freezing temperatures. Since then, dozens of bills and executive orders have been introduced in at least 31 states to clamp down on protests. Activists say the bills are part of a concerted campaign by energy companies and their allies in government to suppress these protests by increasing criminal penalties for minor violations and in some cases trying to use anti-terrorism laws against activists.

The ACLU says documents it obtained from state agencies in Montana suggest law enforcement agencies have begun extensive trainings in preparation for the Keystone XL project, and that federal agencies are involved.

The records raise concerns that law enforcement agencies are preparing to stifle any protests even before they’ve begun, said Alex Rate, legal director of the ACLU in Montana.

“What we’re concerned about is the surveillance and crackdown on peaceful protesters,” Rate said. The records suggest law enforcement officers were given anti-terrorism and social media trainings in preparation for anticipated construction of Keystone XL and any related protests. “I think it would come as news to many people that the government is doing this to prepare for environmental protests about legitimate issues,” he said.

The group submitted public records requests to six federal offices and agencies in January, but received only a small number of records in response so far. Some agencies have said they have no records matching the request, while others have yet to respond. The Army Corps of Engineers provided some records but withheld others, saying they were exempt from disclosure because they would interfere with a law enforcement proceeding, among other reasons.

Documents that have been released suggest federal and state agencies have created an interagency team and have been conducting trainings for local law enforcement on how to handle the protests. One email from an intelligence specialist in the U.S. Attorney’s Office in Montana to a state official said the office would be hosting an anti-terrorism training event in August.

A January email from David Loewen, head of the law enforcement division of Montana Fish, Wildlife and Parks, said the state’s Division of Criminal Investigations had been in touch with officials in North Dakota “to learn what worked and what didn’t” at Standing Rock during the Dakota Access Pipeline protests. The email noted that while “man-camps” to house workers would come along with pipeline construction and bring law enforcement challenges, “the primary enforcement focus is protest activity.”

In an interview, Loewen said the ACLU’s concerns about law enforcement agencies suppressing protests were “a bit silly.”

“Our job is to prepare and train, that’s what law enforcement does all the time,” he said. “If we have a protest coming, chances are things are going to be peaceful and fine and dandy. But on the outside chance that they’re not, we want to be prepared.”

Leif Johnson, assistant U.S. attorney in Montana, confirmed the anti-terrorism training was held in August and said it was unrelated to Keystone XL. Burke Honzel, head of preparedness for Montana Disaster & Emergency Services, said his staff attended the training and that it “did not discuss Keystone XL or protests and was geared towards overseas terrorism tactics.”

Environmental and indigenous activists have describe harsh treatment by law enforcement and security officers in Louisiana, where at least 13 people have been arrested under a new law since it went into effect on Aug. 1, including four activists who were detained on Tuesday.

The law created a felony charge with up to five years in prison for anyone who trespasses on a pipeline easement, and many of the arrests came under questionable circumstances. Activists posted photos and video of the most recent arrests on Facebook, including a video showing two uniformed officers assisting a man who was not in uniform and who is holding a protester against the ground, his arm across her throat, while putting her hands in cuffs behind her back.

The records obtained by the ACLU in Montana echo others in Oklahoma, Louisiana, Virginia and other states that have shown law enforcement agencies focusing anti-terrorism resources on environmental activists and, in some cases, cooperating with private security companies employed by pipeline companies to surveil and arrest protesters.

In a blog post announcing the organization’s lawsuit, Jacob Hutt of the ACLU said the organization hopes to determine from the documents its requested how and whether federal agencies are “thwarting, surveilling, and otherwise engaging with indigenous and environmental activists” opposed to Keystone XL.

“The First Amendment protects political speech from the threat of undue government scrutiny, and the extent of such scrutiny is currently unknown,” he wrote. “If the government is planning to prevent or monitor indigenous and environmental protests, the activists involved have a right to know about it.”