Above photo: Denver Police officers in riot gear walk onto block around the Capitol as they fill the lawn with tear gas to push protesters away. May 29, 2020. Kevin J. Beaty/Denverite.

The lawsuit claims the use of force violated protester’s First Amendment rights.

Denver – The ACLU of Colorado has filed a federal lawsuit on behalf of Black Lives Matter 5280 and other protesters against the City and County of Denver over police use of force during the protests against racism and police violence that erupted in the city last month after the death of George Floyd in Minneapolis.

The complaint alleges the use of force by Denver police, Denver sheriffs and Colorado State Patrol effectively “restricted, frustrated, and deterred” the First Amendment right of protesters in the city. The ACLU said police responded, “repeatedly with an overwhelming and unconstitutional use of force” during protests from May 28 to June 2.

“Plaintiffs have been-and still want to be-part of the movement to protect Black lives,” the complaint reads. “They want to participate in demonstrations against police brutality in the City without fear that law enforcement agents working on behalf of the City will endanger their physical safety and freedom of expression with the unjustified and indiscriminate use of ‘less-lethal’ weapons.”

The complaint lists several injuries suffered by protesters who they allege stem from the use of force by Denver police and other law enforcement agencies.

In a statement, the City Attorney’s office said the lawsuit appears similar to one filed by protesters earlier this month that led a federal judge to issue a temporary restraining order against Denver police using chemicals or projectiles.

The statement said the city attorney’s office is confident Denver police are in compliance with requirements with the recently-passed police accountability bill.

“Additionally, all complaints received regarding any force used by Denver police officers during the protest activities are currently in the process of being investigated by internal affairs and are also being separately reviewed by the Office of the Independent Monitor,” the statement from the City Attorney’s office read. “Finally, the City is in full compliance with the federal district court judge’s temporary restraining order.”

University of Denver psychology professor Dr. Apryl Alexander, one of the plaintiffs in the lawsuit and a leader in BLM 5280, participated in demonstrations on May 28. She said she saw cops launching tear gas into protesters without warning.

She later came into close contact with tear gas during the protests while she was standing back from the large crowd near the Capitol. When Alexander tried to run away, more canisters came in her direction from another line of officers, she said.

“I’m still unsure of what happened to provoke the dispersal of the gas,” Alexander said. “If a person was getting aggressive, why not address that one person, especially when police were in riot gear? Why would you expose the public, probably hundreds of people, to these gases?”

Alexander said she has a history of asthma and that her face kept burning a day and a half later from the tear gas. She also decided not to attend any more protests but monitored the activity and response through social media and news coverage.

“I was fearful of returning back out there, especially when I was seeing the increased excessive force,” she said. “Our biggest concern is, going forward, are people going to be safe?”

Local abolitionist and bail fund founder Elisabeth Epps is also a plaintiff. Epps said she was gassed, shot and bruised by projectiles, including one that hit her face and broke a medical-grade respirator mask she used. Another protester, Zach Packard, said he suffered fractured skull and jaw, two fractured discs and bleeding in his brain after he was struck by a projectile and knocked unconscious. 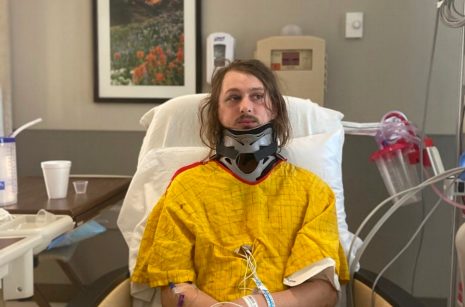 Zack Packard pictured in a photograph as part of a federal lawsuit filed by the ACLU of Colorado against the City and County of Denver for police use of force.

“The City’s actions, while unconstitutional in any context, are even more pernicious here because the use of this dangerously excessive force specifically targeted peaceful demonstrators who assembled to protest police brutality, particularly law enforcement violence that disproportionality targets Black and Brown people,” Silverstein said in a statement.

Protests in Denver responding to Floyd’s death started on May 28 and turned violent that evening. Denver police used non-lethal munitions like pepper balls, tear gas and pepper spray to disperse protesters. They continued using the munition days later while they were assisted by several other metro-area police and law enforcement departments, who used their own set of non-lethal munitions.

The complaint claims the city should be responsible for those additional law enforcement officer’s actions during the protests in Denver.

During a press conference following the first day of protests, police chief Paul Pazen said the use of things like tear gas and pepper balls were a response to people at protests who threw rocks at police. He said officers got involved after protests turned into “destructive, dangerous and criminal behavior,” he said called for police intervention.

Other plaintiffs in the lawsuit include Ashlee Wedgeworth, Amanda Blasingame, Phillip Rothlein Hollis Lyman, Cidney Fisk and Stanford Smith are also plaintiffs. All participated in protests in Denver.

The complaint also alleges the cop’s actions violated the protester’s Fourth Amendment and Fourteenth Amendment right to unreasonable seizures and excessive use of force. The lawsuit seeks compensatory damages (basically, money) for violations of constitutional rights for plaintiffs.

The lawsuit was filed in Federal District Court in Denver. It was filed jointly by ACLU attorneys and attorneys from the law firm Arnold & Porter.