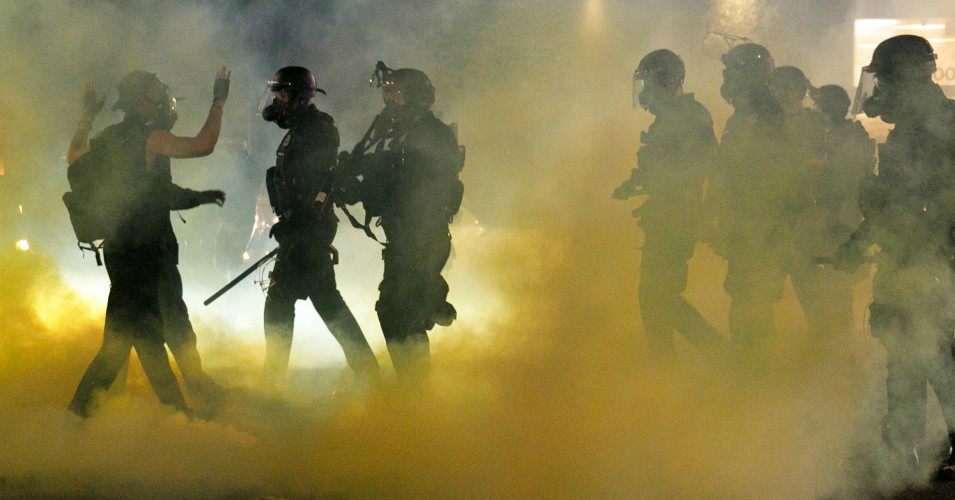 ACLU Sues Trump Administration Over Use Of Secret Police In Portland

NOTE: The ACLU issued a press release about a new class action lawsuit on behalf of journalists and legal observers targeted by unidentified federal law enforcement:

“The American Civil Liberties Union Foundation of Oregon and Braunhagey & Borden LLP filed a class-action lawsuit on June 28, 2020 on behalf of journalists and legal observers who were targeted and attacked by the police while documenting protests in Portland over the killing of George Floyd. The lawsuit was filed against the City of Portland and law enforcement in Portland. The clients in the case are John Rudoff, Mathieu Lewis-Rolland, Sam Gehrke, Tuck Woodstock, Doug Brown, Kat Mahoney, Sergio Olmos, and Index Newspapers LLC.

On July 2, U.S. District Judge Michael H. Simon issued a 14-day temporary restraining order blocking police from dispersing, arresting, threatening to arrest, or using physical force against journalists or legal observers at protests. The court order said journalists may be identified by carrying a press pass, press badge, or distinctive clothing that identifies the wearer as a member of the press. Legal observers included in the order can be identified by their green National Lawyers Guild hats or blue ACLU of Oregon vests. Police also may not seize any photographic equipment, audio- or video-recording equipment, or press passes from journalists and legal observers, or order journalists or legal observers to stop photographing, recording, or observing a protest.

The lawsuit was filed in the U.S. District Court for the District of Oregon, Portland Division. It seeks an order declaring law enforcement’s actions unconstitutional and prohibiting them from targeting and attacking journalists again. The lawsuit also seeks damages for injuries sustained.”

“This is a fight to save our democracy.”

The American Civil Liberties Union Foundation of Oregon sued the Trump administration late Friday over its deployment of federal agents to Portland, where unidentified officials from the Department of Homeland Security and the U.S. Marshals Service have been detaining Black Lives Matter protesters without explanation and using indiscriminate force to crush demonstrations.

“This is a fight to save our democracy,” Kelly Simon, interim legal director with the ACLU of Oregon, said in a statement. “Under the direction of the Trump administration, federal agents are terrorizing the community, risking lives, and brutally attacking protesters demonstrating against police brutality. This is police escalation on top of police escalation.”

“These federal agents must be stopped and removed from our city,” Simon added. “We will continue to bring the full fire power of the ACLU to bear until this lawless policing ends.”

The lawsuit (pdf) against DHS and the U.S. Marshals Service—filed on behalf of legal observers and journalists who were recently assaulted by federal agents in Portland—aims to “block federal law enforcement from dispersing, arresting, threatening to arrest, or using physical force against journalists or legal observers.” One of the plaintiffs, freelance photographer Matthew Lewis-Rolland, was shot in the back ten times with impact munitions during a recent demonstration.

The ACLU said the suit is “one of many” it plans to file against the Trump administration over its deployment of federal agents to Portland against the wishes of state and local political leaders, who have demanded the withdrawal of all federal law enforcement.

Federal officials have reportedly been patrolling Portland in unmarked vehicles and arresting demonstrators since at least July 14.

BREAKING: The @ACLU_OR is taking federal authorities in Portland, Oregon, to court.

This is a fight to save our democracy. These federal agents must be stopped and removed from the city.

This is not law and order. This is lawlessness — and it must be stopped.

Vera Eidelman, staff attorney with the ACLU’s Speech, Privacy, and Technology Project, said “what is happening in Portland is an unconstitutional nightmare.”

“This is not law and order. This is lawlessness,” said Eidelman. “The ACLU will not let the government respond to protests against police brutality with still more brutality. We will continue to hold law enforcement at all levels of government accountable, just as we have nationwide.”