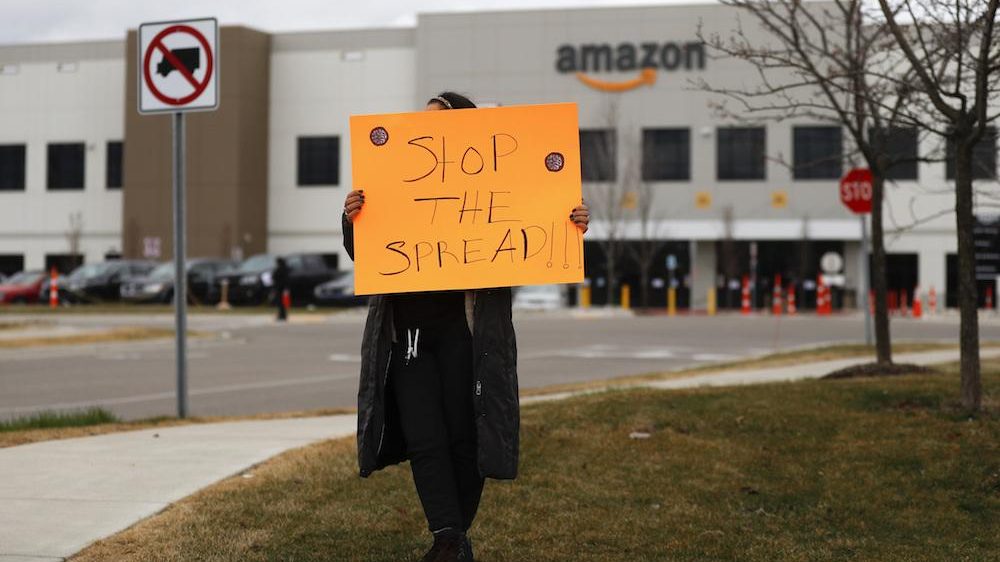 Above photo: A family member of an employee protests outside an Amazon fulfillment center in Romulus, Michigan, last month. Paul Sancya/ AP.

Home-office climate activists and warehouse employees across the nation find common cause mobilizing against Amazon’s policies.

At first, Gerald Bryson didn’t take the coronavirus all that seriously. But then, people he knew started dying. “People I’ve known all my life, big healthy men three times my size, are dead,” he said. “This thing is real.”

He assumed that Amazon, his employer, would take the necessary measures to keep him and his fellow Staten Island warehouse workers safe. Instead, safety precautions “were almost nonexistent,” Bryson said. “When the virus first hit, Amazon didn’t move into gear. We were still doing the same things we were doing on a normal day, crowded.”

Eventually, Amazon informed his warehouse that a number of employees had tested positive. The company didn’t release any of the names, however, so it was impossible for Bryson to know whether he’d been exposed to the people who were sick. It scared him. “I’m not even worried about myself,” he noted. He lives with his son and a two-month-old grandson. “What am I supposed to do?” he asked. “Should I bring it home to my son and his family?”

“They just didn’t handle this whole thing right at all,” he said.

There have now been at least 500 coronavirus cases in at least 125 Amazon warehouses across the country, according to an employee tally. At least one employee has died. In reaction to what they say is the company’s lack of response, Bryson and his co-workers have organized two strikes at his warehouse, part of nationwide unrest among Amazon warehouse employees over what they say are inadequate protective policies, a lack of paid leave and health care benefits, and quotas that make hand-washing and sanitizing difficult. “Right is right and wrong is wrong, and this is wrong in so many ways,” Bryson said.

Warehouse workers’ organizing has now been bolstered by some new and significant supporters: the white-collar tech employees who work at Amazon’s Seattle headquarters.

(In response to the strikes, Rachael Lighty, Amazon spokesperson, said in an email, “While we respect people’s right to express themselves, we object to the irresponsible actions of labor groups in spreading misinformation and making false claims about Amazon during this unprecedented health and economic crisis. The statements made are not supported by facts or representative of the majority of the 500,000 Amazon operations employees in the U.S. who are showing up to work to support their communities. What’s true is that masks, temperature checks, hand sanitizer, increased time off, increased pay, and more are standard across our Amazon and Whole Food Market networks already.”)

In a breakthrough development, the warehouse workers’ organizing has now been bolstered by some new and significant supporters: the white-collar tech employees who work at Amazon’s Seattle headquarters and other offices around the country. More than 500 tech workers called in sick last Friday to protest the working conditions faced by their fellow employees in warehouses across the country. It’s a powerful act of cross-class solidarity that could finally get the company’s attention—and more actions are in the works.

When warehouse workers and delivery drivers reached out to Amazon Employees for Climate Justice, a group of tech employees who have been agitating for Amazon to take steps to reduce its carbon footprint, their tech co-workers were eager to step up. “We knew right away just as fellow human beings, of course we’ll stand with you. Not only as co-workers at the same company, but as fellow human beings,” said Emily Cunningham, who was a user-experience designer. “It’s imperative that we stand up for one another.”

“It’s very intentional that ‘justice’ is part of our name,” she continued. “We’ve always been about centering on the fact that the climate crisis is not a fair crisis; it’s disproportionately harming and killing vulnerable populations.” When the warehouse workers reached out, “We immediately saw the parallels between the climate crisis and the coronavirus pandemic: what we value, who we value, who we decide to protect.” Her group first responded by marshaling 580 signatures from corporate and tech employees to the warehouse workers’ open letter demanding better protections and conditions.

Then they organized an event at which warehouse workers would speak via video about the conditions they’re facing, with special guest speakers including writer and activist Naomi Klein. The response was overwhelming, Cunningham said: Within a couple of hours, more than 1,550 people had accepted or tentatively accepted a calendar invitation. The company then began deleting the invite, however, from all of their calendars.

The protesters countered by planning a sick-out, calling on tech workers to “pressure for better conditions for our warehouse coworkers, including paid leave for all,” in the words of their public call to action. Dubbing it a sick-out, not just a strike, was intentional. “It was a more visceral term than just a ‘walkout,’” Cunningham explained. “COVID is an illness, and warehouse workers in the United States don’t have the sick time that they need in order to keep themselves and the public safe.” She pointed out that at Amazon headquarters in Seattle, when one case was reported in a particular building, everyone else was mandated to work from home immediately. But many warehouse workers didn’t have that option, and until the company offered unlimited paid time off in response to the pandemic, they couldn’t even opt to stay home from work. “It’s a huge, huge difference between what tech workers and warehouse workers were facing,” she said.

Throughout Friday, she and her fellow organizers held a video event featuring tech employees, warehouse workers, and climate activists from around the globe. They treated warehouse workers “with respect and admiration, true admiration, rather than calling them heroes and not treating them as if they’re heroes,” she said.

“It was an incredible day of togetherness,” she added. “It was a really transformative time and moment.”

Tech employees have been organizing since long before the pandemic. Under the Amazon Employees for Climate Justice banner, Cunningham and a large group of fellow tech employees had been demanding for a year and a half that Amazon release a measurement of its carbon footprint and commit to a number of actions to reduce those emissions and move away from fossil fuels. They even staged their own strike last year, with over 1,700 employees pledging to walk out as part of the global climate strike last September 20.

The tech employees “were fighting this fight, I must say, before we were,” Bryson said. But as with the tech workers, warehouse workers were already “fed up,” as he put it, before the pandemic hit. More than 100 workers at his facility had protested working conditions back in November. He was part of a tight-knit, high-performing team of black men, but their manager broke the team up despite their high productivity. “That’s when we start really noticing that we’re just getting it every way in this building from these people, they don’t give a crap about us even when we break our neck to do the right thing,” Bryson said. Then, he continued, “this virus walks in the door.” It was the match that lit the conflagration of worker outrage. Amazon denies that the incident happened; Lighty said, “This accusation is absolutely not true.”

The two groups have now joined forces, fusing their fights into one. “I’m sorry to say it takes a pandemic for this to happen,” Bryson said, “but we are stronger, so to speak, together. We are united across the country. We’re more united than ever and it’s growing.”

“Amazon has no choice but to take notice,” he said.

Amazon has indeed taken notice. In mid-April, Cunningham and another tech employee, Maren Costa, were fired for violating its communications policy that bars employees from speaking publicly about company policies and conduct. “They decided to go after the two of us, not everybody,” Cunningham noted, “because we’ve been some of the most visible faces at Amazon Employees for Climate Justice.”

Asked about Cunningham and Costa’s firings, an Amazon spokesperson said, “We support every employee’s right to criticize their employer’s working conditions, but that does not come with blanket immunity against any and all internal policies. We terminated these employees for repeatedly violating internal policies.”

It’s a powerful act of cross-class solidarity that could finally get the company’s attention.

Gerald Bryson was fired on April 17. Bryson says he was fired for using profanity while legally protesting on his day off, even though he wasn’t on the clock. Even so, he thinks his word choice wasn’t the issue. “It’s because I was protesting,” he said.

“If you’re in the way of Amazon, you’ll be fired,” Bryson added. “You try to do the right thing and they’ll make you out to be a scoundrel.”

Of Bryson’s termination, Lighty said, “We respect the rights of employees to protest and recognize their legal right to do so, but these rights do not provide blanket immunity against bad actions, including those that harass, discriminate against or intimidate another employee.”

Still, the workers’ demands seem to have resonated, at least in part. After employees organized for paid time off for all employees, the company announced it would make it available to part-time and seasonal workers retroactively to March 1. Two weeks ago, after the two warehouse strikes, the company started giving out masks and gloves, Bryson said.

But other battles loom. Although Amazon had extended unlimited paid time off in the face of the coronavirus so that warehouse workers could choose to stay home for their own safety, it informed them that the policy wouldn’t extend past the end of April.

Amazon warehouse workers are far from done with their protests. The next action planned is a walkout on May 1, International Workers’ Day, in which they are to be joined by workers at Instacart, Shipt, Target, Walmart, and Whole Foods—an action that workers are calling a “May Day General Strike.” Strikers will demand basic protections for frontline employees, health care and paid-leave benefits, and hazard pay.

Bryson may have been fired, but he’s not done yet. “I am still part of the fight,” he said. “You punch me in the face, you knock me out, but I’m not down for the count.”

And tech workers will be standing with their frontline colleagues. “COVID isn’t going anywhere, the climate crisis isn’t going anywhere, and neither are we,” Cunningham said. “I really feel like we’re at an important moment in history, and we’re going to be seeing more and more people speaking up and standing up.”