The reports we have are that Congresswoman Pramila Jayapal is planning to introduce her new Medicare for All legislation in early February.

We still have not seen a copy of the text – now her office says they will not release it ahead of time – but many HOPE members have been in touch with her office and have met with her staff. It seems the bill is better than the senate version but weaker than our gold standard, the former HR 676, in critical ways.

This means we have a short time to act to urge Congresswoman Jayapal to strengthen the bill so that everyone’s health is protected. Call her office today.

Here are the serious flaws we are aware of:

1. It allows investor-owned facilities. Think of the for-profit hospitals, nursing homes and dialysis centers. They cost more and provide inferior care, resulting in thousands of excess deaths each year. HR 676 banned them and would have bought their facilities. The new bill will keep them and try to restrict their profits. This will likely result in them finding ways to skirt the rules to profit or selling their facilities to developers, which means losing healthcare infrastructure.

2. It keeps almost half the population out for an extra year. HR 676 would begin with everyone in the system from day one starting on January one a year after the law is passed. The new bill excludes people ages 20 to 54 until two years after it is passed. This is 47% of the population, including people with high levels of debt, low-paying jobs and health needs. There is no rationale for excluding them. It will make the transition more complicated and result in suffering and preventable deaths.

3. It may exclude undocumented immigrants from the national system and leave it to states to decide. Jayapal’s office is worried that including immigrants will make the bill have greater opposition. We already know the bill will have opposition from the profiteers and right wing. We can’t sacrifice our immigrant sisters and brothers in this fight. If the decision is left to the states, then immigrants in Texas and Arizona won’t get care.

Make the call now to urge Congresswoman Jayapal to protect the health of everyone. We appreciate what she has done so far, but we can’t accept a bill that is weaker than our former HR 676.

And sign on to this letter to Congresswoman Jayapal. It will be delivered on Tuesday, January 29. 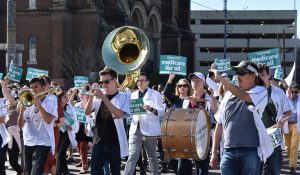 Tell everyone you know about the call-in tool and sign-on letter. Once the bill is introduced, we will have it for the next two years. It will shape the debate about National Improved Medicare for All.

We will discuss the new bill and how we organize with it on the next Health Over Profit for Everyone national call on Monday, January 28 at 9:00 pm Eastern/6:00 pm Pacific. If you have already registered for the call, you will receive a reminder. If you have not,

Emergency physician Dr. Brad Cotton describes the real life and death consequences of for-profit care. And Kay Tillow of Kentuckians for Single Payer provides the data on for-profit facilities causing thousands of excess deaths and explains why HR 676 banned them.

This is why we must act now to put Health Over Profit for Everyone!