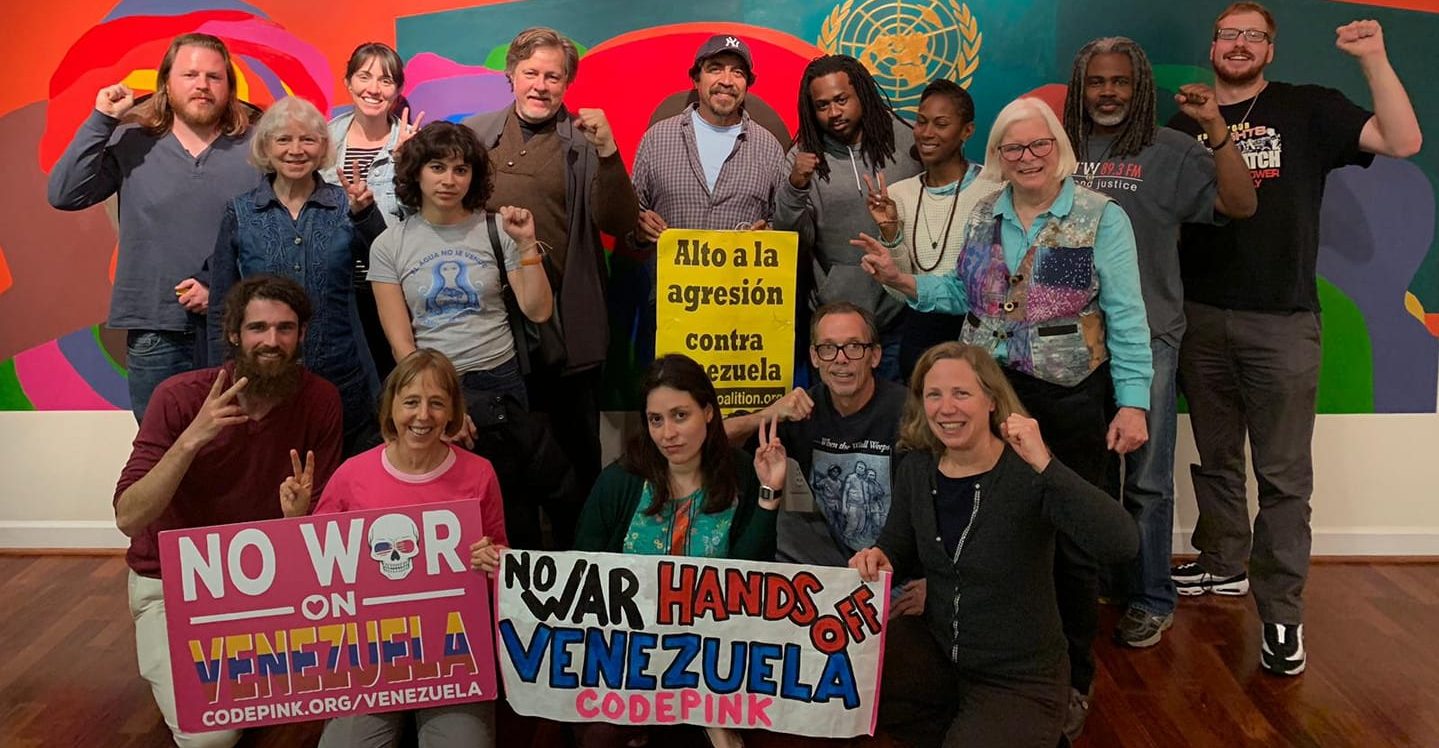 Above photo: Activists pose for a photo after an evening of Palestinian resistance music and presentation on the Black Alliance for Peace’s “Shut down AFRICOM” campaign by Pan African Community Action.

UPDATE: On April 30, Juan Guaido attempted a coup again and failed. We understand he is currently hiding in the Chilean embassy with Leopoldo Lopez, who is seeking asylum. This coup attempt emboldened the Venezuelan opposition to protest at the embassy in very aggressive ways and even to try to break in multiple times. We are still here, though, and holding it down. We will need reinforcements to be able to keep protecting the embassy. If you can join us, please sign up at bit.ly/VZEmbassyProtector.

More than 1,200 people and organizations have signed on to The Declaration of the Embassy Protection Collective (Colectivos Por La Paz). The Collective began living in the embassy on April 10 with the permission of the elected Venezuelan government. People are sleeping, working, cooking and living in the embassy as activist-tenants. We have put messages on the outside of the embassy calling for an end to sanctions, end to the coup, and peace between Venezuela and the United States. The Collective holds forums or cultural events every night. Some nights more than 50 people have slept in the embassy and there is a core group of a dozen people consistently staying the embassy.

We are receiving no financial support from Venezuela or any government. This Collective is funded by donations. You can donate to the campaign to stop the US coup in Venezuela here.

We are building for the day we anticipate the Guaido forces will try to takeover the embassy. If you are interested in being an Embassy Protector (there are no and low risk ways to support), please complete this form and we’ll be in touch. CLICK HERE TO SIGN UP.  The upcoming weeks are critical. We are serving as interim protectors until Venezuela and the United States can complete their negotiations for a permanent protectorate. Come and join us. To see updated events and see livestreams of previous events visit the Facebook page fo the Embassy Protection Collective.

Wednesday, May 1 – An Evening with Author Max Blumenthal

Thursday, May 2 – Anniversary of Odessa Massacre in Ukraine Rally and Talk

Friday, May 3 – An Evening with Peter Kuznick on How to Unfuck the World

If you can’t make the above events in person, watch for them to be live streamed on our Facebook page. Please DONATE to support the defense of the Venezuelan embassy.

Washington, DC – Activist-tenants opposed to the Venezuelan opposition takeover of diplomatic buildings belonging to the elected Venezuelan government have been staging a 24/7 live-in to protect the Venezuelan Embassy that lies in the heart of Georgetown in Washington DC.

Calling themselves the Embassy Civilian Protection Collective, the activists are working in the embassy during the day, holding educational events in the evening, and sleeping on couches at night. The evening events include seminars on Julian Assange, Haiti, US foreign policy in Africa, peace talks with Korea, the war in Yemen, and the political situation in Venezuela, among others. The Collective lives in the embassy with the permission of the elected Venezuelan government and is breaking no laws.

Nowhere else in the world, even in countries that have recognized opposition leader Juan Guaido, have governments allowed the opposition to take over Venezuela’s diplomatic buildings. The Trump Administration is not only allowing this illegal seizure of diplomatic premises but is facilitating it. According to Article 22 of the 1961 Vienna Conventions on Diplomatic Relations, diplomatic premises are “inviolable” and agents of the receiving State may not enter them, except with the consent of the head of the mission. Moreover, the receiving State must protect the premises against any intrusion, disturbance of the peace or impairment of its dignity.

“Like it or not, the Maduro government is actually the government in power in Venezuela and is recognized by the United Nations. This Trump-orchestrated plan of creating a parallel government and then simply taking over diplomatic premises is totally absurd, unprecedented and illegal,” said CODEPINK co-founder Medea Benjamin, who has been camped out at the embassy. “It doesn’t matter whether you support President Maduro or not, this is about supporting international law and opposing a coup. That’s why we are determined to protect the embassy from a hostile takeover.”

“The Embassy Civilian Protection Collective is peacefully defending the embassy with the permission of the Venezuelan government, which owns the building. If the opposition members, police or secret service enter the building, they will be trespassing,” added Margaret Flowers, co-director of Popular Resistance. “We feel a responsibility to hold our government to a standard of respecting the rule of law. If the US can attempt to install an unelected and illegal government in Venezuela, what’s to stop it from doing that to other countries?”

Attorney Kevin Zeese of Popular Resistance added “If the government enters the embassy they will be the ones breaking the law. They will be unlawfully entering, trespassing and violating the Vienna Convention. If our Collective is evicted the laws protecting tenancy must be followed. That requires due process and an eviction hearing. If members of the Collective are unlawfully arrested, we will hold those who ordered the arrests and those who carried out the arrests responsible. We have not unlawfully entered as the elected Venezuelan government has given us the keys. The Collective is not trespassing, as we reside in the embassy with the permission of the owner of the building — the legitimate, elected government of Venezuela. We are breaking no laws and encourage Venezuela and the United States to negotiate a resolution to providing a protectorate for the US embassy in Caracas and the Venezuelan embassy in Washington, DC.”

People are encouraged to join the Collective. If you want to participate CLICK HERE TO SIGN UP.  If you cannot attend please donate to the campaign.