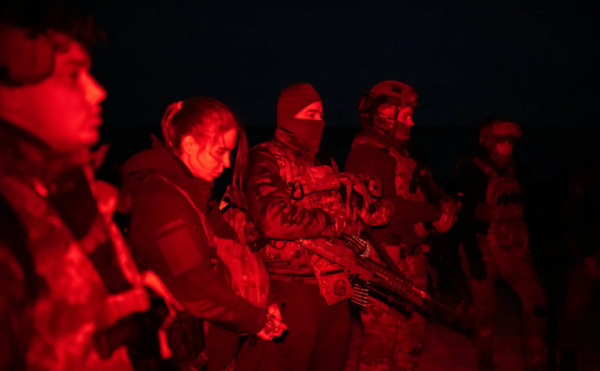 Above Photo: The New York Times (11 / 21/22) captioned this photo, “Members of the Bratstvo battalion’s special forces unit prayed together before going on a night operation.”

Please remind the New York Times to clearly identify neo-Nazi forces when they appear in coverage, and to refrain from depicting such movements as heroes.

The New York Times has found another neo-Nazi militia to fawn over in Ukraine. The Bratstvo battalion “gave access to the New York Times to report on two recent riverine operations,” which culminated in a piece (11/21/22) headlined “On the River at Night, Ambushing Russians.”

Since the US-backed Maidan coup in 2014, establishment media have either minimized the far-right ideology that guides many Ukrainian nationalist detachments or ignored it  completely.

Anti-war outlets, including FAIR (1/28/22, 3/22/22), have repeatedly highlighted this dynamic—particularly regarding corporate media’s lionization of the Azov battalion, once widely recognized by Western media as a fascist militia, now sold to the public as a reformed far-right group that gallantly defends the sovereignty of a democratic Ukraine (New York Times, 10/4/22; FAIR.org,  10/6/22).

That is when Azov’s political orientation is discussed at all, which has become less and less common since Russia launched its invasion in February.

The lesser-known Bratstvo battalion, within which the Times embedded its reporters, is driven by several far-right currents—none of which are mentioned in the article.

Bratstvo was founded as a political organization in 2004 by Dmytro Korchynsky, who previously led the far-right Ukrainian National Assembly–Ukrainian People’s Self-Defense (UNA-UNSO).

Korchynsky, who now fights in Bratstvo’s paramilitary wing, is a Holocaust denier who falsely blamed Jews for the 1932–33 famine in Ukraine, and peddled the lie that “120,000 Jews fought in the Wehrmacht.” He has stated that he sees Bratstvo as a “Christian Taliban” (Intercept, 3/18/15).

In the 1980s, the Times portrayed the religious extremists of the Afghan mujahideen—who were receiving US training and arms—as a heroic bulwark against Soviet expansionism. We all know how that worked out.

In an echo of that propaganda campaign, the Times neglected to tell its readers about the neo-Nazi and theocratic politics of the Bratstvo battalion. Why should anyone care who else Bratstvo members would like to see dead, so long as they’re operating in furtherance of US policymakers’ stated aim of weakening Russia?

The article’s author, Carlotta Gall, recounted Bratstvo’s Russian-fighting exploits in quasi-religious terms. Indeed, the only instances in which the Times even hinted at the unit’s guiding ideology came in the form of mythologizing the unit’s Christian devotion.

Of Bratstvo fighters embarking on a mission, Gall wrote, “They recited a prayer together, then loaded up the narrow rubber dinghies and set out, hunched silent figures in the dark.” Referring to battalion commander Oleksiy Serediuk’s wife, who also fights with the unit, Gall extolled, “She has gained an almost mythical renown for surviving close combat with Russian troops.”

The piece even featured a photograph showing militia members gathered in prayer. Evoking the notion of pious soldiers rather than that of a “Christian Taliban,” the caption read, “Members of the Bratstvo battalion’s special forces unit prayed together before going on a night operation.”

The Times also gave voice to some of the loftier aims of Bratstvo’s crusade, quoting Serediuk’s musing that, “We all dream about going to Chechnya, and the Kremlin, and as far as the Ural Mountains.” Nazi racial ideologues have long been enamored by the prospect of reaching the Urals, which they view as the natural barrier separating European culture from the Asiatic hordes.

While plotting Operation Barbarossa, Hitler identified the Urals as the eastern extent of the Wehrmacht’s planned advance. In 1943, referring to the Nazi scheme that aimed to rid European Russia of Asiatic “untermenschen” so the land could be settled by hundreds of millions of white Europeans, Himmler declared, “We will charge ahead and push our way forward little by little to the Urals.”

‘Mindset Of The 13th Century’

The only two Bratstvo members named in the piece, meanwhile, are Serediuk and Vitaliy Chorny. While Chorny—who the Times identified as the battalion’s head of intelligence gathering—is quoted, his statements are limited to descriptions of the unit’s fighting strategy. Serediuk’s recorded utterances are similarly lacking in substance.

Far more illuminating is an Al Jazeera article (4/15/15) titled “‘Christian Taliban’s’ Crusade on Ukraine’s Front Lines,” which quotes both Serediuk and Chorny extensively. Serediuk, Al Jazeera reported, “revels in the Christian Taliban label.” In reference to his decision to leave the Azov battalion, the piece went on to say:

Serediuk didn’t leave the Azov because of the neo-Nazi connections, however—extreme-right ideology doesn’t bother him. What does irk him, however, is being around fighters who are not zealous in their religious convictions.

In the same piece, Chorny invoked the violently antisemitic Crusades of the Middle Ages to describe Bratstvo’s ideological foundation:

The enemy—the forces of darkness—they have all the weapons, they have greater numbers, they have money. But our soldiers are the bringers of European traditions and the Christian mindset of the 13th century.

To circumvent the Times’ exultant narrative, one has to do a certain amount of supplementary research and analysis. But even the most basic inquiry—searching “Bratstvo battalion” on Google—reveals the far-right underpinnings of the unit with which the Times embedded its reporters.

The seventh search result is a June 2022 study from the Combating Terrorism Center at West Point, which reported, “Another such far-right entity is the so-called Brotherhood (Bratstvo) ‘battalion,’ which includes Belarusian, Danish, Irish and Canadian members.”

The ninth result is an article from the Washington Free Beacon (4/6/22), which quoted a far-right Canadian volunteer as saying on Telegram that he was “fighting in the neo-Nazi ‘Bratstvo’ Battalion in Kyiv.”

In a world where journalists actually practiced what they preached, someone at the paper of record surely would have noticed the Nazi insignia appearing in two photos in the piece. In this world, however, the Times either forgot how to use the zoom function—though the paper made extensive use of this capability when reporting on China’s Communist Party Congress the month before (FAIR.org, 11/11/22)—or they simply did not want to report on this ugly and inconvenient discovery.

One soldier is seen wearing an emblem known as a “Totenkopf” in a photo of Bratstvo’s prayer circle. The Totenkopf, which means “death’s head” in German, was used as an insignia by the Totenkopfverbande—an SS unit that participated in Hitler’s war of annihilation against the Soviet Union, and guarded the concentration camps where Nazi Germany condemned millions of Jewish men, women and children to death.

Individuals donning the Totenkopf also took part in the murder of millions of others in these camps, including Soviet prisoners of war, political dissidents, trade unionists, persons with disabilities, homosexuals and Romani people.

In September, Ukrainian president Volodymyr Zelenskyy posted—and then quietly deleted—a picture on social media of himself with a number of soldiers, one of whom was wearing a Totenkopf patch similar to that seen in the Times’ photo of Bratstvo’s prayer meeting. One can easily find this particular iteration on Amazon or eBay.

Later in the Times article, another photograph of a soldier wearing a slightly different version of the insignia appeared. Here, bathed in the light of an interior room and staring out from the very center of the image, the Totenkopf is even harder to miss. **Amazon**’s product description for this specific variant reads, “This gorgeous replica piece takes you back to World War II.”

If the Times simply failed to identify the Totenkopf in two separate photos—both of which were taken by a Times photographer while he was embedded with Bratstvo, and were then featured prominently in the article—that would certainly amount to a journalistic failure.

The alternative scenario is that the Times did recognize the SS memorabilia worn by the soldiers they chose to embed with, and decided to publish the images anyway without commenting on the matter.

Please remind the New York Times to clearly identify neo-Nazi forces when they appear in coverage, and to refrain from depicting such movements as heroes.