Demand to #CloseTheCamps Escalates With Actions Throughout the Summer; Doing Nothing is Not an Option: Protestors Arrested Blocking NYC Traffic

With billions from Congress and zero oversight measures, the deportation force of ICE and CBP continues to open up detention camps across the country to incarcerate immigrants and children. In spite of new horrors being revealed almost every day, conditions in these camps worsen, no perpetrators have been held accountable and the people of color being tortured in them have not been released.

We must stop the criminalization of immigrants, family separation, and the killing of asylum seekers.  We must lead with values and respect for human lives by defunding these agencies and ending the mass incarceration of children and immigrants.

The actions listed below are a collective efforts by local and national organizations, by both immigrants and allies to escalate actions.

Immigrant youth, Japanese Americans, Indigenous, Black, and Jewish  allies come together in action to demand the closure of all the concentration camps that ICE and CBP have built across the country, including the upcoming Fort Sill camp that is set to incarcerate migrant children.

Saturday, July 27 in McAllen, Texas led by The Native Voice Network and The Carrizo Comecrudo Tribe.

Natives from across the U.S. are joining the Carrizo Comecrudo Tribe in what is now known as Texas, in taking a stand against the U.S. government’s response to the migration of our relatives from the south.  The current response to the mobility of Indigenous peoples who have been living, migrating and traveling on this continent for thousands of years is unacceptable. We, the First People of this land, with inherent authority on immigration to the U.S., will gather with allies to rally and call for an end to the practice of family separation, to dismantle detention facilities and stop border wall construction.

Thursday, August 1 in Lawton, Oklahoma led by the Heartland for Human Justice

The coalition is protesting the opening of the new detention center in Fort Sill, Oklahoma, and will lead an interfaith vigil in remembrance of the children who have died while in detention.

These organizations are answering the call from their immigrant partners to #CloseTheCamps on a traditional Jewish holiday of mourning by organizing “Tisha B’Av: Jews Say #CloseTheCamps” events across the country.

Doing Nothing is Not an Option: Protestors Arrested Blocking NYC Traffic 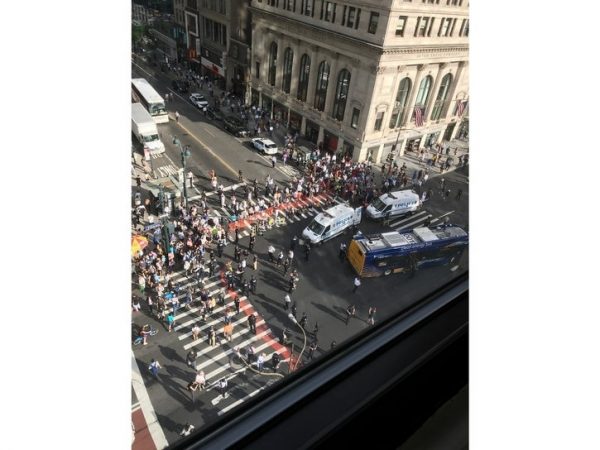 Police prepare to load anti-ICE protesters onto a bus after the group shut down Fifth Avenue and 42nd Street.  Lily Gellman (@lilygellman)  //  patch.com

Last night (July 15, 2019) almost 50 people were arrested after blocking the intersection of 5th Avenue and 42nd street in Manhattan. I took part in the action, which blocked rush hour traffic for almost 90 minutes. We held banners reading “Close the Camps,” “No Raids,” and “Abolish ICE.”

It is always a hard decision about whether to take part in civil disobedience, particularly actions that will inconvenience members of the general public and people just trying to do their job. But we are in a crisis moment: it isn’t just the raids and the camps, but a broader effort to blame immigrants and refugees for the global economic and political crisis created by decades of neoliberal policy and capitalist crisis. We chose to block the streets because we need to draw attention to the seriousness of the moment and show solidarity with immigrants being targeted. Doing nothing is not an option, and we hope to inspire others to take action as well.

Although we were blocking the roads there were many people who gave words of encouragement and joined the chanting.

The action was coordinated by the group Rise and Resist. If you want to support their work or join future actions, visit
https://www.riseandresist.org/