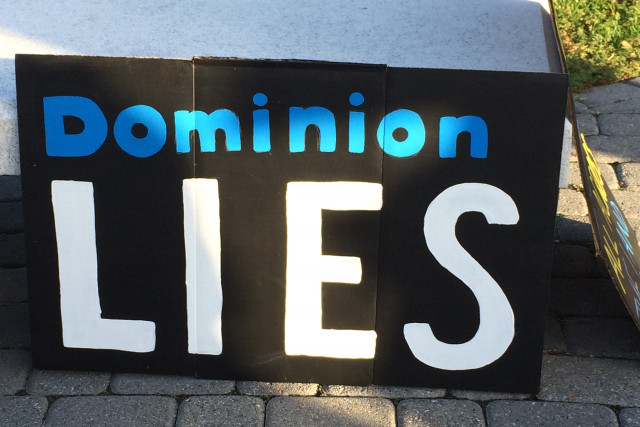 Above photo: Sign from a protest. Posted on PowerforthePeopleVA

This week, the Federal Energy Regulatory Commission held a ‘public input session’ on the Atlantic Coast Pipeline in Suffolk, VA. According to Ryan Murphy in The Virginian-Pilot, the ACP is “a proposed 550-mile natural gas pipeline that would carry as much as 1.5 billion cubic feet of natural gas each day from West Virginia’s shale fields to North Carolina and Virginia.”

The public input sessions were designed to prevent the public from hearing each other. The FERC has moved to a new format for their public events. Rather than allowing people to be together and hear each other’s testimony, people have to speak with FERC officials one-on-one.

On February 16, more than 100 people turned out for the FERC’s event. Protesters gathered outside the event room with signs and banners and some spoke out. Here is video from The Virginian-Pilot:

North Carolinians have similar concerns and are feeling betrayed by their public officials. Amanda Robertson published this piece urging people to contact their members of Congress on The Alliance to Protect the People and Places We Live website:

Citizens of North Carolina, be advised that Senator Tillis, Senator Burr and Congressman Richardson have written to FERC Secretary, Kimberly Bose, on behalf of all of us, telling a slew of untruths, requesting FERC approve the Atlantic Coast Pipeline “because it will mean cleaner energy sources [first untruth] for the area [second untruth] as well as jobs for constituents. [third untruth]”

Yet North Carolina citizens would be left with the environmental fallout, damage to property, health risks and increased healthcare bills, and increased energy bills to pay for the $5.5 billion dollar expense Duke Energy and Dominion will spend to put it in! Anyway you look at it we all lose and politicians and big oil win at our expense.

So write Kimberly Bose yourself and copy Bobbie Richardson, Thom Tillis and Richard Burr and let her know how their constituents really feel about this proposed pipeline!

The Sierra Club posted this update, which includes actions that are being planned to stop the ACP:

This past week, the Beyond Dirty Fuels team, the Virginia Chapter, and our frontline partners have been organizing opposition to the Atlantic Coast Pipeline at the first four of ten public comment sessions held by the Federal Energy Regulatory Commission.  More than 250 people so far have testified in opposition to the pipeline with comments critical of FERC’s Draft Environmental Impact Statement.

Jeff Staples of the Virginia Chapter reports that more than 100 people attended last night’s ACP hearing in Suffok, garnering good media coverage, including this article in the Virginian-Pilot.  Photos of the protest outside are attached.

In rural areas of NC where Sierra Club has a smaller base of support, over 150 people turned out to three hearings this week, voicing concern about how the pipeline would impact rivers, fishing, endangered species, and public safety. Local newpaper coverage included articles in the Wilson Times, Roanoke-Chowan Times-Herald (not available online) and Fayetteville Observer.  Photos from the event are attached.

FERC has moved to a closed-door format and is recording testimony in a private room.  Media and documentary film-makers have been kept out of the forums, generating this NC Policy Watch article about the media shut out.  In one hearing, FERC contractors sought unsuccessfully to bar Sierra Club from handing out talking points to attendees.

In North Carolina, Sierra Club helped promote parallel “people’s hearings” to provide a forum for people to air their views, network, and strategize. In Fayetteville, Wilson, and Roanoke Rapids, North Carolina, neighbors and concerned community members people clustered in the hall, in hotel event rooms, and around school cafeteria tables to swap information, share stories, talk to the press, get organized and encourage each other.

In Virginia and West Virginia, the Atlantic Coast Pipeline has been met with stiff opposition by the Virginia Chapter and Sierra Club partners.  And just this week, gubenatorial candidate Tom Periello came out against the Atlantic Coast and Mountain Valley pipelines, signaling that the pipelines could become an election issue. In Virginia, the route cuts through the Blue Ridge mountains, spoiling cherished views from the Blue Ridge Parkway, fragmenting forests, blasting world-class trout streams, and threatening organic farms and public lands with aerial pesticide spraying.

Next week’s hearings will be in the Virginia towns of Farmville, Lovingston, and Staunton, with hearings the following week moving on to Monterey VA and Elkins and Marlinton, WV. Kirk Bowers of the Virginia Chapter and WV organizer Bill Price will continue will continue fueling opposition to the pipeline as FERC continues its sessions over the next two weeks.

Shoutouts go to Jeff Staples for organizing a successful hearing and protest in Suffolk, new Beyond Dirty Fuels organizer Caroline Hansley for her help with the NC hearings, Zachary Jarjoura of the Virginia Chapter for drafting the action alert, online organizer Casey Francis for a successful email arc, Gabby Gillespie for managing the phone banking outreach effort, and the NC Chapter’s Zak Keith  for assistance with putting VAN to work reaching North Carolinians.

We’ve set our goal for written comment participation high and encourage you to sign the petition or sign up to attend a public hearing on our action alert here or through AddUp, our social media platform for activists. Help us spread the word and let FERC know we mean to stop this pipeline.