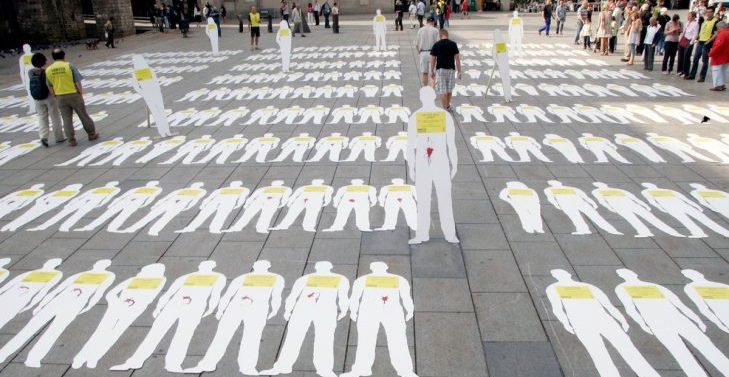 Above photo: From Justice for Colombia.

(Toronto, Ottawa, Buenaventura) Protests are being organized across Canada and in 58 cities around the world on July 26 to demand an end to the wave of mass killings targeting human rights defenders and social movement leaders in Colombia.

Organizers of the Toronto “July 26, walk for Life and Peace in Colombia” say there’s an invisible genocide taking place in Colombia. Violence against civil society has intensified at an alarming rate without effective action on the part of government to end the bloodshed. More than 500 social activists and 138 demobilized guerilla combatants have been killed since the signing of the Peace Accord between the state and FARC (Revolutionary Armed Forces of Colombia) in 2016.

A five kilometer walk through downtown Toronto and events across Canada will draw attention to this human rights crisis, demanding  meaningful implementation of the Peace Accord and urging the Canadian government to take a more proactive stance in response to the crisis.

“The Free trade agreement between Canada and Colombia signed in 2011 was supposed to improve respect for human rights in Colombia. The Canadian government remains silent in the face of this latest wave of systematic killings. Canada must do more than support its extractive (oil and mining) companies, and instead prioritize the life of land defenders in Colombia”  says Alfonso Ibarra, Ottawa- Gatineau organizer.

The Walk for Life and Peace is part of an International day of mobilization and solidarity with Colombian social leaders and for peace.  In Toronto the walk will be lead by Profesor Gustavo Moncayo, who in the past marched over 1,000 kilometers across Colombia when his son was held captive.

“We call on the international community to pressure their governments to take responsibility for the damages they have contributed to in Buenaventura, Colombia, through the implementation of free trade agreements and their neoliberal policies, which impose an economic model of death upon our people” says Maria Miyela Riascos Riascos, spokesperson for the Buenaventura, Colombia Civic Strike Committee

Quebec | 5PM | Atrium of the Church of San Roche

For more information about the Toronto walk visit https://lacsn.ca/casa   or see Facebook event.

Colombian-Canadians rally for peace amid rising violence back home

By Nicholas Keung Immigration Reporter (Toronto Star) It was with great fanfare that the Colombian government signed a peace deal in 2016 with rebel fighters, heralding a new beginning for the South American country after decades of war and conflict.

But peace has proved elusive amid rising bloodshed, a spike in killings of civil rights leaders and former guerrillas by paramilitaries and criminal groups and the slow pace of reconciliation.

Almost three years after the peace deal was signed, Colombian-Canadians will take to the streets on Friday as part of a global effort to draw attention to the situation in their homeland.

“People outside of Colombia think everything is OK after the peace agreement, but it’s not,” said Sandra Cordero, a union activist who sought political asylum in Canada in 2002 after she and her family received death threats from paramilitaries in Bogota over her advocacy work. “People continue to be displaced and murdered. The only power we have is speaking out.”

Raul Burbano of Common Frontiers, an international labour and human rights advocacy group, said Canada’s 100,000-strong Colombian-Canadian community was ecstatic when the peace accord was signed, but is now disappointed by the delay in land redistribution to people displaced by the conflict and the slow pace with which a truth commission is working to seek out facts about the killings committed during the war.

“Colombia has had a history of peace agreements that failed and we don’t want history to repeat,” said Burbano, whose group is among the organizers of the Walk for Peace and Life in Toronto, one of 180 cities around the world staging the International Day of Mobilization, including Montreal and Ottawa.