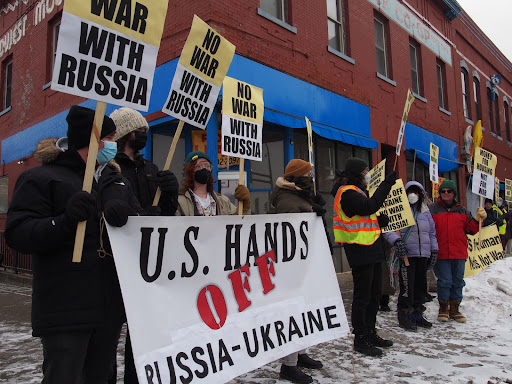 Why Anti-War Movement Wants US Out Of Ukraine

Minneapolis, MN – Fight Back! News interviewed Meredith Aby-Keirstead, a founding member of the MN Anti-War Committee, on February 27 for her anti-war perspective on the crisis in the Ukraine and the proxy war developing between the U.S./NATO and Russia.

Fight Back!: Why should Americans join with the anti-war movement right now?

Meredith Aby-Keirstead: This is a critical time to stop the U.S. as it fans the flames of war. Both Democrats and Republicans in Congress want to send more weapons and more military support to Ukraine, which would be like pouring gasoline on this fire. Not only would it kill any diplomatic solutions, U.S. weapons would end up in the hands of right-wing Nazi militias who will use them to attack ethnic Russians. This would also further inflame tensions.

New polling from the Associated Press shows that Americans don’t want the U.S. to play a major role in this conflict, so we need to make sure that politicians understand this is not what the American people want. Biden in fact just approved $350 million in military aid for Ukraine yesterday. But what we really want and need is money spent on human needs not war.

In the Twin Cities right now teachers in Minneapolis and Saint Paul are about to go on strike to demand resources for our public schools. They are being told at the negotiating table that there are no funds for schools. But there are! Think about what we could do with the $350 million Biden just signed off on yesterday. The U.S. spends billions on war when we should instead be spending those same resources on educating kids, fighting COVID and stopping climate change.

Fight Back!: What do you think of the anti-war protests that have taken place worldwide?

Aby-Keirstead: I’m happy to see an upsurge in the anti-war movement around the world. Peace-loving people everywhere want to see diplomacy from all parties to prevent the conflict from spiraling even further out of control, and to create the conditions for a long-term peace in Ukraine and Eastern Europe. Sanctions will only hurt the most vulnerable on all sides and must be firmly opposed. Here in the U.S., we’re focused on opposing the escalatory and aggressive actions of our government, and call for the immediate disbandment of NATO, which has never brought the international stability or human rights that it pretends to stand for.

Some people ask us, in the anti-war movement, why we don’t focus our criticisms on Russia and Putin. But we are living in the U.S. so it is our responsibility to hold our own leaders accountable to the will of the people, and we need to be aware of the U.S. role as an imperialist power. As the anti-war movement it is also important for us to all “out” the selective outrage about the events in Ukraine when Israel, funded by the U.S., commits war crimes in occupied Palestine on a daily basis, and Saudi Arabia continues to bomb Yemen. We need to denounce all wars and acts of aggression, even and especially, those of our so-called allies and the U.S..

Fight Back!: How has the Biden administration been intervening in the Ukraine?

Aby-Keirstead: Even though the U.S. and NATO agreed to stop expanding NATO in the 1990s, they have been courting Ukraine’s membership, and, with the U.S. involvement in the 2014 Ukrainian coup, the Obama administration set in motion events that only brought Ukraine closer to the U.S. and further from Russia.

The U.S. already has 90,000 troops in Europe and Biden has been moving U.S. troops and equipment into Estonia, Latvia and Lithuania. Similarly, NATO has been moving troops, strike fighters and helicopters to the Baltic states. Since 2014, the U.S. has sent over $2.5 billion in military aid to Ukraine which included CIA trainers, defensive systems and Javelin anti-tank missiles and, as I already said, Biden is sending hundreds of millions more.

Fight Back!: What has triggered Russia into sending troops into Ukraine?

Aby-Keirstead: Russia feels threatened by these U.S. and NATO moves to encircle Russia. Additionally, since 2014, Ukrainian nationalists and fascists have violently attacked ethnic Russians in the Ukraine, particularly in Donbass, and Russia is under pressure to defend them. Many people have asked me, “How can you as a queer woman defend Putin?” But saying no to more U.S. imperialism is not the same as supporting Putin. And I think it’s important to note that this is an inter-imperialist conflict between the U.S. and Russia. However, that doesn’t mean that the U.S. didn’t provoke it or that the U.S. doesn’t see an advantage in starting a proxy war next door to Russia that drains Russia’s resources and prevents it from further challenging U.S. imperialism around the world.

Fight Back!: Tell us more about what has been going on in Donbass.

Aby-Keirstead: More than 14,000 people have died in the conflict in Donbas since 2014. What most Americans don’t understand is that there has been fighting between ethnic Russians and Ukrainian military and right-wing nationalist forces since the U.S.-sponsored coup in 2014. Similarly, the U.S. media hasn’t been reporting on the treatment of ethnic Russians in Donbass leading up to this conflict which makes the conflict hard for people here to understand at all. Granted we also have the issue that some Americans still think Russia is a socialist country, which it’s not, and [that they] imagine that NATO is the same as the UN.

Fight Back!: What are the U.S. incentives for intervening in Ukraine?

Aby-Keirstead: In 2019, the RAND Corporation, a pro-war organization of the U.S. military-industrial complex, sent a report to the U.S. Army Chief of Staff in which it stated that the ideal U.S. strategy would be to use sanctions, propaganda and other measures to push Russia towards war with Ukraine in order to make it overextend itself militarily.

Additionally, this conflict is about whether Russia or the U.S. gets to have influence over Ukraine. Both see it as a country rich with natural resources, including large deposits of coal, oil, natural gas, iron, manganese, titanium-zirconium ores and other non-metallic raw materials. The BBC reports that Russia is the second-biggest exporter of crude oil, the world’s largest natural gas exporter and that the EU sources nearly half of its gas from Russia. Russia was developing the Nord Stream 2 pipeline to deliver natural gas to Germany and the EU under the Baltic Sea. By destabilizing Ukraine, Russia isn’t able to complete their pipeline, which prevents them from being able to keep challenging the U.S. economically. This intervention is a part of a long list of U.S.-sponsored conflicts for fossil fuels. The U.S. sees Russia, like China, as a key hurdle to their imperialistic vision.

Fight Back!: What can we do to pressure the U.S. to stop escalating the conflict?

Aby-Keirstead: Well in Minnesota we should be protesting Senator Amy Klobuchar, and we just held a protest in front of her office in Minneapolis on the 24th. She is definitely a mouthpiece for the Biden administration’s Russia policy. Nationally, we need for there to be protests across the country to say “no” to more U.S. weapons and military aid to Ukraine. We need to be demanding that the U.S. stop promoting NATO expansion and to even be challenging why the U.S. is propping up NATO. We see from Yugoslavia to Libya to Afghanistan the damage that NATO can do. This conflict has the potential to kill a lot of people – especially Ukrainians – so we need to be challenging the Biden administration’s idealistic message that it is “helping Ukraine” when in fact they are making it more likely that this conflict will be bigger and longer while lining the pockets of U.S. weapons manufacturers.

In Minnesota, the Anti-War Committee is building for the Women Against Military Madness protest on Wednesday, March 2 which is a part of the International Week of Actions to Stop War with Russia. We encourage folks around the country to organize anti-war actions between March 1-7!