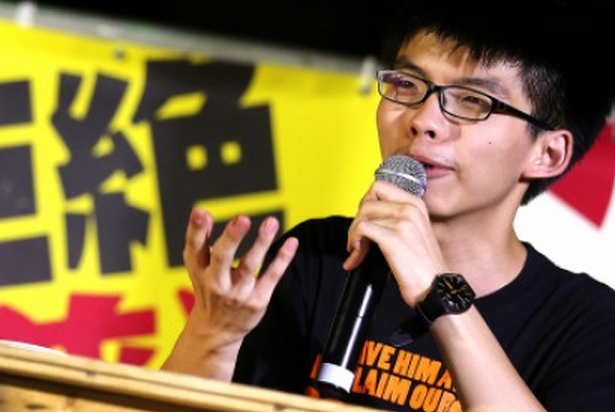 Joshua Wong received news he would face charges as he was about to leave Hong Kong for a holiday in Japan. Photo: David Wong

Student leader Joshua Wong Chi-fung and three other activists are set to be charged with obstructing police officers during a protest outside the central government’s liaison office last summer.

They say the move by police, more than a year after the protest took place, appears like a political prosecution.

In a WhatsApp message to the media yesterday, Wong, convenor of student group Scholarism, said he was at the airport checking in for a morning flight to Japan to go on holiday when he received a telephone call from Western District crime squad.

He was told to report to police by Thursday, when he would be charged. He was accused of obstructing officers in carrying out their duty at a protest outside the liaison office in Western on June 11 last year.

Wong recalled burning a copy of Beijing’s white paper on Hong Kong at the protest. “But fewer than 30 people took part … I really don’t understand how I obstructed the police from carrying out their duty,” he wrote.

He agreed to report to police next Monday or Tuesday after returning from Japan.

Wong had staged the demonstration with the League of Social Democrats and People Power. They burned copies of the controversial white paper issued by the State Council, which they saw as a threat to the “one country, two systems” policy.

Chan said the protest had been “very peaceful” that day and there were no arrests.

“It is white terror,” he said. “I was prepared that police would come back to us for all these protests in the past year but I just didn’t expect they would pick this case.” Chan said he would report to police tomorrow.

“If police think the offence is serious, why have they dragged this out for over a year before prosecuting us?” Raphael Wong asked. “This sounds to me like a purge after Occupy Central and the [recent] political reform vote [in the Legislative Council].”

The two Wongs may also be charged with contempt of court for allegedly ignoring court bailiffs who had arrived to clear the Occupy protest site in Mong Kok in October last year.

A video posted by Raphael Wong on Facebook yesterday showed that just seconds after Chan and others set a dummy copy of the white paper alight outside the liaison office, a police officer poured water over it.

Just as Chan started to argue with the officer, another officer jumped in and doused the small flame with a fire extinguisher.

A police spokesman said the cases relating to obstructing officers from executing their duties were “under investigation” and they would not rule out arrests.

At the same time, police have made no arrests in the Joshua Wong street assault case.

Last week, the student leader and his girlfriend were attacked in Tai Kok Tsui. He was grabbed by the neck and punched in the face by a man in his 20s, who was accompanied by a woman of similar age.