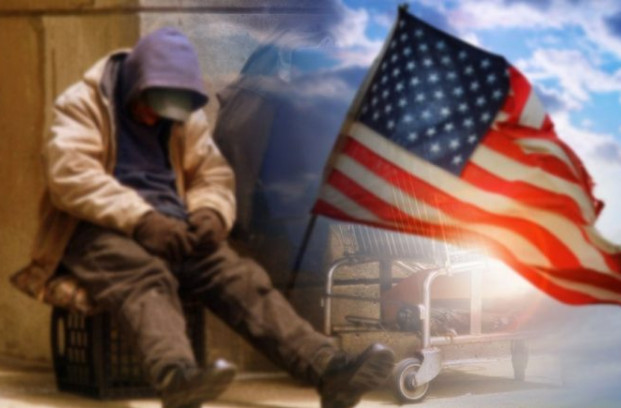 Arrested For Feeding Homeless Without Permit Before Thanksgiving

The Sunday before Thanksgiving Atlanta police handed out tickets to activists feeding the homeless in a clear display of disregard for its hungry citizens simply because activists didn’t have a food distribution permit.

Atlanta, which is in Fulton County, has long had a policy requiring organizers of such efforts to obtain a permit.

Local authorities have in the past turned a blind eye to the ordinance, though, according to the activist groups including Food Not Bombs that feed the homeless. But last week that changed, of all times right before the American holiday where you are supposed to give thanks and share. Instead, those giving to others in need were arrested for not having a measly piece of paper that authorizes them to hold the food drives and pay the state to do so.

These permits are often costly and are an outrage in that they violently coerce groups into applying for charity toward fellow citizens so they don’t starve to death. But, alas, the state has always used and abused the color of law to be sure they get their cut of whatever they deem to be “illegal.” When it comes to food, however, it is a practice that is particularly inhumane and insane to punish people’s natural inclination to help those in need.

Two activists who were arrested, Adele Maclean and Marlon Kautz, spoke out on the matter to local CBS station WSB-TV in Atlanta.

“I mean, outrageous, right? Of all the things to be punished for, giving free food to people who are hungry?”  Maclean told CBS WSB-TV.

“It seems ridiculous to me that they would be spending their time and resources on stopping people from feeding the homeless,” Maclean added.

Georgia State Police also distributed a flyer, produced by Atlanta’s Department of Public Safety, about the enforcement of a county ordinance that requires permits for the “operation of a food service establishment.” According to the flyer, enforcement is necessary for sanitary reasons and because “many people become dependent on these activities, leading them to stay on the streets instead of seeking the help and support they truly need,” the Intercept reported.

Georgia citizens aren’t giving up according to Maclean; she noted that they will be holding meal serving outside of the courthouse in a blatant display of disobedience.

“There is gonna be a meal serving outside the courthouse on that same day. So I’m due in the court at 8 a.m. on the 14th, and we will be outside with a table with coffee and breakfast,” she told The Intercept.

This isn’t the first time that activists have been harassed for not paying the State to hold an event that helps their fellow citizenry. Earlier this year, activists affiliated with the same group Food Not Bombs were arrested in Tampa, Florida for the same heinous “crime” of not getting the state’s permission to feed the homeless in their own cities and counties.

It may surprise some of our readers, but it is actually illegal to feed the homeless without a permit or is altogether banned in many cities across the country.  In 2014 it was reported that 71 cities in the U.S. have passed or tried to pass ordinances that criminalize feeding the homeless, according to Michael Stoops, director of community organizing at the National Coalition for the Homeless. 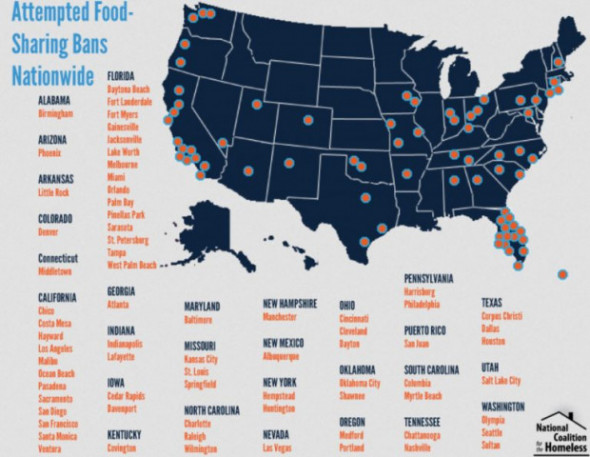 According to the Associated Press in the year 2013, four out of every five adults in the United States will “struggle with joblessness, near poverty or reliance on welfare for at least parts of their lives.” And, yet, it is become more generally frowned upon to offer food assistance. Ironically, the argument is often that recipients of such charity won’t seek the help they ultimately need.

Wouldn’t you want someone to offer their time, love and compassion to cook you a meal if you fall on hard times due to something completely beyond your control? Some day you might have to rely on such generosity. We can’t stop feeding the homeless simply because of a dictate from the State, nor should we stop exposing the lack of compassion that some police have while they serve and protect the State and not their own citizens.  The only option and hope is we the people, so be a human being and feed those in need instead of promoting the heartless idea that people need to starve because “it’s the law.”

This is a perfect example that many times the law isn’t ethically or morally justified. In such cases, it requires people to be defiant in the face of tyranny. Wasting resources to arrest nonviolent criminals for feeding homeless people should eventually catch enough wind in the public until people simply will not tolerate their tax dollars supporting such injustice. We should remember that without peaceful civil disobedience there wouldn’t be civil rights or women’s rights either.

Atlanta Indymedia caught the insane arrests as they happened in the video below uploaded to YouTube.