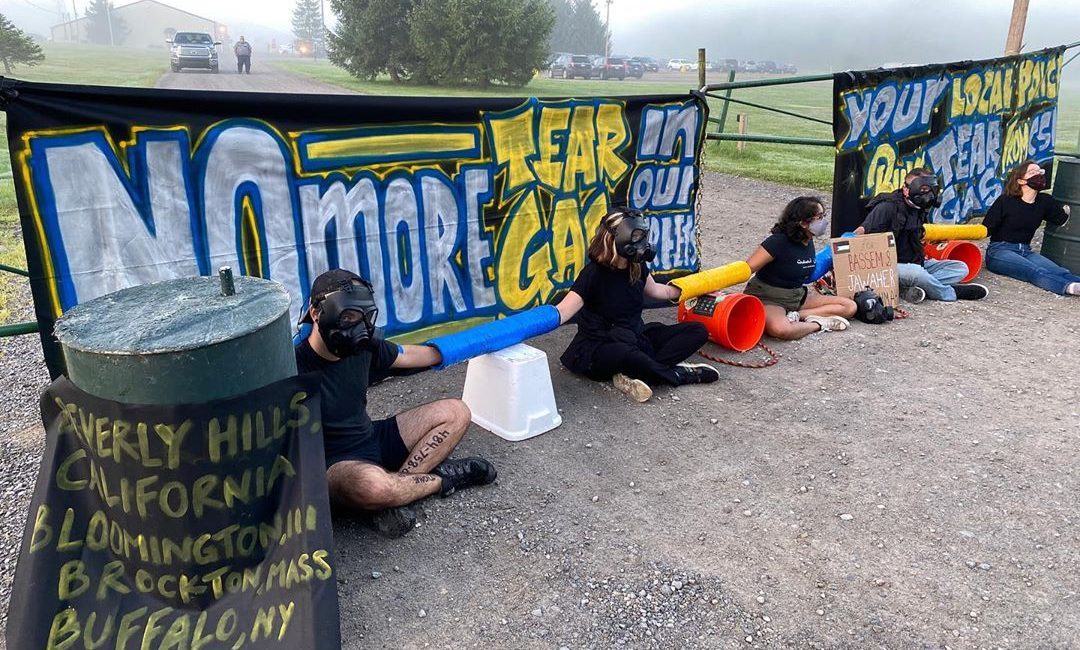 Right now, we are blockading the entrance of @CombinedSysInc w giant tear gas cans & gas masks, refusing to move. By shutting down this facility today, we are here to tell CSI President Jacob Kravel that his company’s production of tear gas must come to an end. #FacingTearGas2020 pic.twitter.com/UB7fzMX2t0

These five are with a group of 40 activists from cities across the U.S. who are onsite in Jamestown, PA with the goal of shutting down operations at Combined Systems Inc. for the day. Outside the facility, other activists staked over a hundred yard signs, each with the name of a different city where tear gas has been used against people.

By shutting down this facility, we are here to put CSI President Jacob Kravel on notice that his company’s production of tear gas must come to an end. We hope whatever he chooses to produce in this factory can be useful rather than harmful.

We’ve all seen the headlines: tear gas used by local and federal forces to repress Black Lives Matter protests. Despite the fact that tear gas has been banned in war since the 1925 Geneva Protocol following World War I, the chemical weapon continues to be used domestically as a means of “riot control” and is exported around the world. Right now there are five tear gas manufacturers in the United States, which is five too many.

Combined Systems Inc. (where we are today) is one of the largest tear gas manufacturers in the U.S. They are supplying chemical weapons for use in U.S. prisons, to the Department of Homeland Security, and to police departments cracking down on protests in the U.S.

As internationalist organizers, we recognize that tear gas, while often manufactured in the U.S., is exported and used all around the world. In 2017, Baek Nam-Gi, a South Korean farmer, was killed in a demonstration after being hit with a blast from a police water cannon containing tear gas. In 2018, an eight-month-old baby, Layla al-Ghandour, died in Gaza after tear gas inhalation. Osman Abubakir, a 62-year-old fruit seller in Khartoum, died after Sudanese forces deployed tear gas. Just this past week, Lebanese riot police fired tear gas against protestors in Beirut. And we’ve tracked tear gas from Combined Systems Inc. (the manufacturer we’re protesting today) to Guatemala, Hong Kong, Palestine, Egypt, Bahrain, Yemen and Tunisia.

We are empowered by the messages of solidarity we received from folks in Jamestown and across the United States. Yesterday, our group successfully deterred a shipment from entering Combined Systems Inc. and had many meaningful conversations with neighbors and folks driving by. All five members of the blockade were arrested and we will share updates today on their status.

Expectedly, we also received many hateful comments implying threats to the lives of activists on the ground on Facebook. We expected this because the culture of militarism leads people to believe that violence is the solution to conflict, and that all conflict is a case of abuse that must be confronted with brute force. This is wrong. As activists committed to revolutionary nonviolence, we believe in strategic confrontation of people, organizations, and systems that cause harm. After all the harm tear gas has caused on our streets, in prisons, at the U.S. border, and around the world, we need to confront those who manufacture this tool for repression.