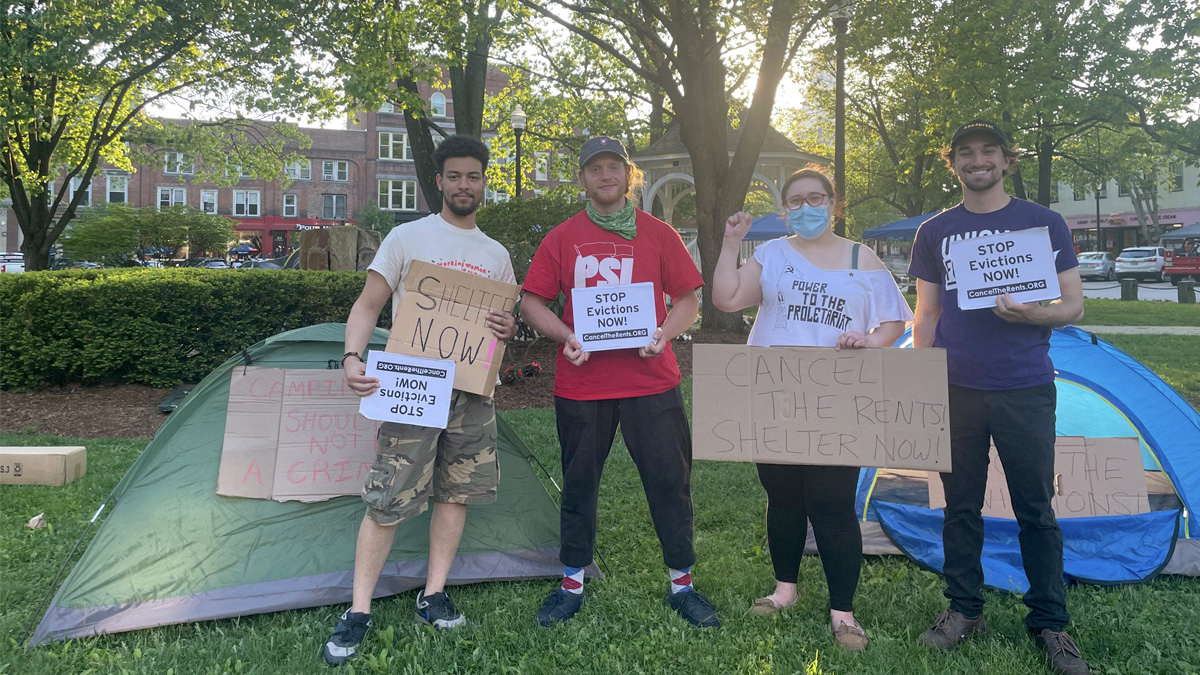 Keene, New Hampshire – Community organizers in Keene, New Hampshire, pitched tents in Central Square Park outside of Keene City Hall for an overnight protest on the evening of May 21 to draw attention to an impending eviction of a homeless encampment behind the local Aldi and Kohls.

Earlier in May the encampment was served an eviction for May 23. The eviction notice was delivered by city police, accompanied by new “no trespassing” signs tacked to trees in the camps. The residents are being evicted by property owner Wilder Co. only two months after an eviction behind the local Hannaford supermarket forced many to relocate to the woods behind Aldi and Kohls.

Campers described eviction after eviction to outreach volunteers from Keene Mutual Aid, one saying “We have nowhere else to go.”

In March, local organizers from the Southern New Hampshire branch of the Party for Socialism and Liberation, Keene Mutual Aid, and NH Rights and Democracy held a rally and an eviction defense for those camping behind Hannaford. While many moved on willingly before the eviction, the actions prevented an aggressive sweep of the last remaining campers.

City Councilors Robert Williams, Catherine Workman and Bryan Lake responded to the actions with a proposal to designate campsites with access to dumpsters and latrines. The proposal was presented by the three councilors to the City Finance and Planning Committee, accompanied by mass public input in favor during the period of public comment.

The proposal passed and an ad-hoc housing stability committee was formed by Mayor George Hansel to address the issue. Despite this definite step forward, the committee has made it clear by omission that they are not actively pursuing the option of designated campgrounds and will seek standard avenues to address the issue — standard avenues which across the country have failed to be accessible to the ever growing population of homeless people.

On May 21, protesters set up tents and directed their calls to “stop the sweeps” at City Hall. Organizers gave speeches, handed out fliers and encouraged the 30 or so attendees as well as curious park goers to contact the city government and media, as well as the property owner of the shopping plaza. Organizers also urged attendees to spread the word in the community and talk with their circles in order to build mass awareness. As was stated by an organizer from Keene Mutual Aid, “I think the most important demand right now is that the city give them somewhere to go.”

Around midnight the protest was disrupted by an aggressive agitator who, despite great efforts protesters to de-escalate the situation, called city police on the protesters. The agitator was made to leave but the police also chose to enforce the city ordinance against camping and asked that the protest goers break down their tents and move on. Despite these difficulties, organizers plan to continue making this invisible issue visible in the heart of downtown Keene.

On May 23, PSL and Keene Mutual Aid organizers brought provisions and checked in on their neighbors behind the shopping plaza, who reported that city police are taking a passive approach to the eviction. While the campers are still required to move, aggressive enforcement of the eviction seems to be off the table. Organizers will be continuing to support campers in their efforts to find new sites throughout the week.