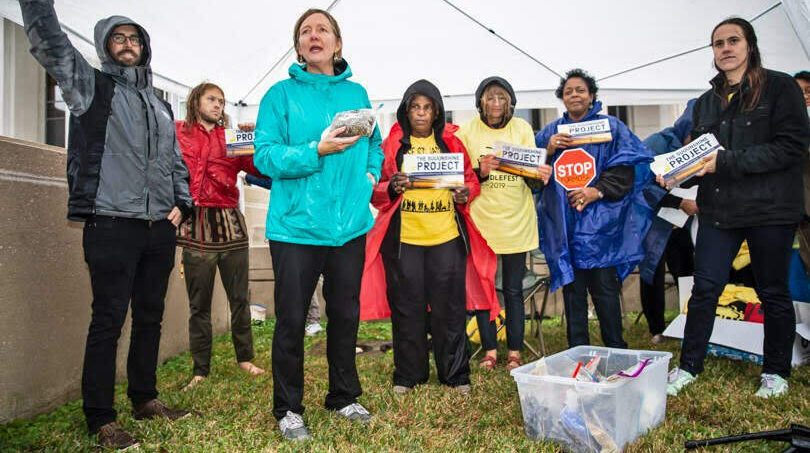 Above photo: Activists including Anne Rolfes and Kate McIntosh at “Nurdlefest” held in front of the Louisiana Department of Environmental Quality in Baton Rouge on December 10, 2019. Credit: Julie Dermansky © 2019.

Two Louisiana environmental activists, Anne Rolfes and Kate McIntosh, were taken in handcuffs and leg irons from a Baton Rouge police station to jail after they voluntarily surrendered themselves on felony charges after months’ earlier delivering plastic pollution pulled from Texas waters to fossil fuel lobbyists’ homes. The two posted bond and were released later the same day.

“The women are accused of terrorizing oil and gas lobbyists by giving them a file box full of plastic pellets found in Texas bays near a plastic manufacturing facility owned by Formosa Plastics,” NOLA.com reports.

Rolfes and McIntosh are being charged with felony “terrorizing” under Louisiana Revised Statute 14:40.1, according to their attorney, Center for Constitutional Rights attorney Pam Spees. The charges carry sentences of up to 15 years imprisonment.

The charges “do not even pass the laugh test,” Spees said in a statement. “We ask the District Attorney to look carefully at these arrests and reject the charges against these two dedicated advocates as soon as possible.”

The allegations against the two Louisiana Bucket Brigade activists center around an event dubbed “Nurdlefest,” that was designed to raise awareness about plastics pollution along the Gulf Coast. Newly made plastic emerges from petrochemical plants in the form of “nurdles,” or tiny plastic pellets, which are then sold in bulk to industrial clients.

The two were charged after “returning a sealed container of the very plastic pellets that the company illegally dumped into the Lavaca Bay in Texas,” to industry representatives, according to the Alliance to Defend Democracy, a recently formed watchdog group, in a statement. One or more file boxes of the pellets, which had been dropped off at homes of an unnamed oil and gas lobbyist along with information about plastic pollution, appear to have led to today’s crimincal charges.

“The sealed package was labeled with a written disclaimer explaining exactly what they were and advocating that Formosa’s air permit be denied,” the organization added.

The Guardian reported that the Baton Rouge police department spokesman Don Coppola said, “A note was observed on the top of the package indicating not to open the container as the contents could be hazardous,” and police requested hazmat officials be contacted.

The plastic nurdles at the center of the criminal case came from a Formosa plant in Texas and had been collected by Diane Wilson, an activist with the San Antonio Estuary Waterkeeper. Wilson plucked them from waterways near the Formosa plant in Point Comfort Texas where the company has been illegally discharging them for years.

Wilson used the same nurdles as evidence in a lawsuit against Formosa Plastics Corp. USA that resulted in a $50-million-dollar settlement last year.

Wilson gave a definitive “no” when asked if a package of the nurdles could harm a human being.  Though the nurdles are bad for the environment, delivering nurdles in a box would present no danger at all, she said.

“Jack Wu, who brought a bottle of nurdles to a meeting, claimed that nurdles are harmless,” Wilson told DeSmog. Wu is a vice president at Formosa Plastics.

Wilson had given the nurdles she’d collected in Texas to the Louisiana activists to help them in their campaign to stop another Formosa plastics plant from being built.

Just this morning she documented more new nurdles escaping from the plant into the waterways, she told DeSmog, adding that the continued pollution violates the terms of the settlement. The company had agreed to ensure that nurdles completely stopped polluting local waterways, which flow down to the Gulf of Mexico, by January 15, 2020.

Asked about today’s criminal charges, a Formosa representative denied that the company had been previously aware that charges would be filed against the two activists. “FG was unaware that this action was going to be taken by the state and had only heard second hand that deliveries of plastic pellets were made to several personal residences in the Baton Rouge area some months ago,” Janile Parks, Director of Community and Government Relations, FG LA LLC, a Formosa subsidiary, said in a statement emailed to DeSmog.

This is completely bananas. They are criminalizing peaceful protest of dangerous pollution. These are desperate, flailing tactics from an industry finally being held accountable for the harm that they've caused. https://t.co/Uqiq1WFDWN

Activists from St. James Parish, Louisiana, decried the charges against Rolfes and McIntosh.

“They are charging people with terrorism for getting a little bit of nurdles delivered to them while we are worried about our lives,” Sharon Lavigne, founder of RISE St. James, a community group fighting plastics and petrochemical plant construction in St. James Parish, told DeSmog after the news broke. “They know the petrochemical complex they are building is going to slowly kill us. We should be charging them with terrorism, not the other way around.”

Last week, Lavigne had sought and received a restraining order allowing her to make a visit to cemeteries of enslaved African Americans that activists had discovered were on Formosa’s St. James property, which includes former plantation land. Lavigne had been warned by sheriff’s deputies that she would not be allowed to visit the gravesite, where she says her ancestors are buried. She sought the restraining order so that she and others could make a one-hour visit to the cemeteries on Juneteenth, a holiday commemorating the end of slavery in the U.S., without fear of arrest.

Days earlier, Louisiana governor John Bel Edwards had vetoed a bill that would have imposed mandatory minimum sentences of three to 15 years for some acts of trespassing, including those on fossil fuel industry infrastructure, including plastics plants. The Louisiana House of Representatives is now weighing whether to try to override the governor’s veto, though observers told DeSmog they did not expect those efforts would garner sufficient support.

“The oil and gas industry is trying to criminalize dissent,” Loyola University law professor Bill Quigley, who also represents Rolfe and McIntosh, told DeSmog. “It is very troubling — not only for environmental activists, but all activists.”