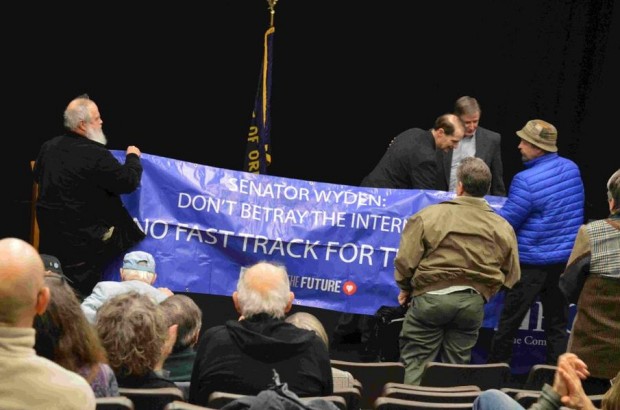 Join us for an Emergency Protest to stop fast track and let TPP negotiators know we oppose the TPP. Click here: Rapid Response to Stop TPP.

Grants Pass, OR— Activists working in coordination with digital rights group Fight for the Future briefly disrupted a town hall meeting hosted by Oregon Senator Ron Wyden when they unfurled a banner behind the Senator reading, “Senator Wyden: Don’t Betray the Internet! No Fast Track for the TPP!”

The activists are joining tens of thousands of voices who have called upon Senator Wyden to oppose outdated and undemocratic “Fast Track” legislation, also known as “Trade Promotion Authority,” as well as the Trans-Pacific Partnership (TPP), a massive, secretive trade deal that has been condemned by advocacy organizations from across the political spectrum.

“Senator Wyden has long been considered a champion of Internet freedom, which is why it’s unthinkable that he’s pushing for outdated Fast Track legislation, which could have dire consequences for the future of the free and open web,” said Evan Greer, campaign director of Fight for the Future. “Senator Wyden now has a choice: he can be remembered as the hero who stuck to his principles and defended the Internet, or as the traitor who allowed DC politics and corporate interests to poison the web with censorship.”

While activists on the ground in Oregon brought their message directly to Senator Wyden, thousands more took action online, tweeting, calling, and emailing the Senator to ask him to oppose Fast Track legislation and stand up for the free and open Internet.

Previously, Fight for the Future, Oregon Fair Trade Campaign, and other groups sent Senator Wydenthousands of floppy discs as part of a campaign calling for him to oppose Fast Track legislation. The Senator alsoreceived an open letter signed by more than 25 tech companies, asking him to oppose such legislation.

Join us for an Emergency Protest to stop fast track and let TPP negotiators know we oppose the TPP. Click here: Rapid Response to Stop TPP.