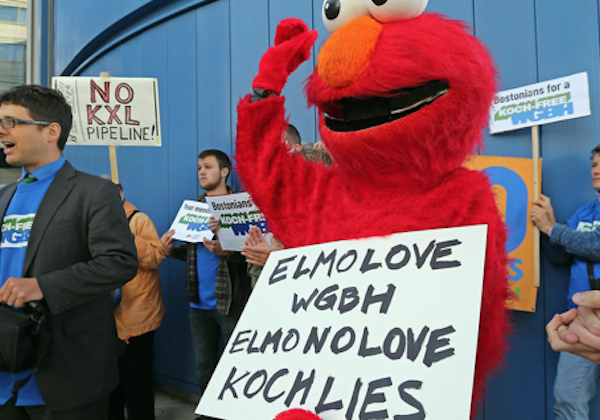 “I am here today because David Koch is a climate denier and ’GBH has scientific programs and he should have absolutely no influence on PBS and public broadcasting,” said Nate Goldshlag of Arlington.

Some protesters dressed as Sesame Street characters Elmo, Big Bird and the Count joined the crowd. Dozens then packed the board of trustees meeting.

A Herald videographer was not allowed to record the meeting, but Emily Southard of Forecast the Facts said that though they weren’t allowed to address the board, some protesters interrupted the meeting to complain about Koch’s involvement.

Koch has contrib­uted millions of dollars to WGBH — and specifically to its science-based “NOVA” program — over the past 30 years.

WGBH officials have insisted that trustees don’t influence the content of programming and that Koch will remain on the board.