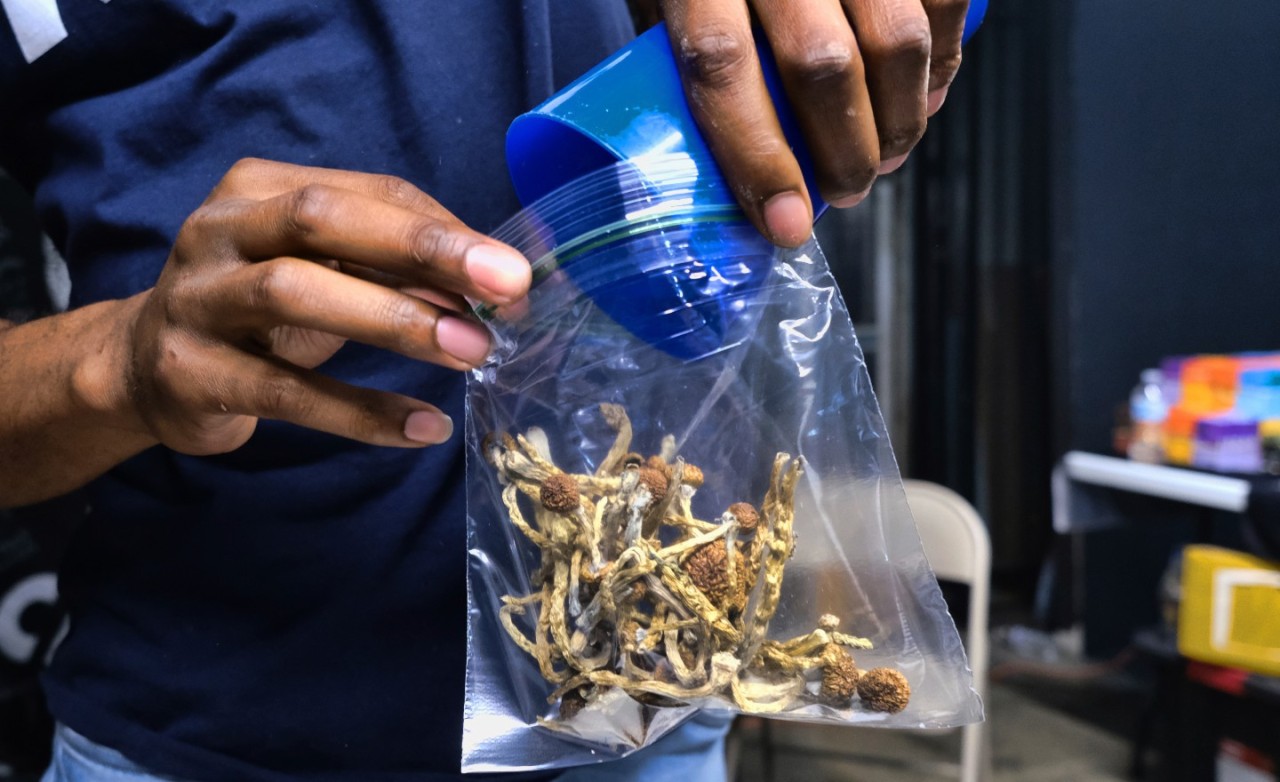 Protesters demanded the agency allow patients with life-threatening conditions to legally use psilocybin to treat their anxiety and depression under the 2018 Right to Try Act.

Federal police arrested 17 protesters who were lying down in front of the building’s entrance and refused to leave until a representative from the agency met with them to discuss their demands. The DEA refused to send anyone out to speak with demonstrators, which included terminally ill cancer patients.

Getting arrested demanding meeting with DEA yesterday. I was in custody a short while. Police were professional and we demonstrated non-violently. But DEA got tagged hard! We even captured their agency flag! The DEA acted like cowards to Americans facing death by not meeting. pic.twitter.com/kLvuVedNCK

Studies over the past several years have shown promise in using psilocybin-assisted therapy to treat disorders like depression and anxiety. A 2016 study from Johns Hopkins University found a majority of participants suffering cancer-related anxiety or depression experienced “considerable” relief for up to six months from a single large dose of psilocybin. Participants who experienced a positive outcome reported a decrease in depressed mood, anxiety, death anxiety and an increased quality of life, life meaning and optimism.

Since then, limited studies focused on psilocybin in tandem with talk therapy have shown to help longtime smokers quit smoking and reduce symptoms of major depression in participants.

The string of encouraging research on the psychedelic drug prompted Sunil Aggarwal, co-director of the Advanced Integrative Medical Science Institute (AIMS) in Seattle, and AIMS’ attorney Kathryn Tucker to ask the DEA in January 2021 for guidance on how to obtain psilocybin to treat terminally ill cancer patients suffering anxiety and depression under the 2018 Right To Try Act.

The Right To Try Act, signed by former President Trump, allows patients who have been diagnosed with life-threatening diseases or conditions who have exhausted approved treatment options and are unable to participate in clinical trials to have access to unapproved treatments.

The DEA, however, responded noting psilocybin is a Schedule I substance under the Controlled Substances Act (CSA) and the 2018 Right To Try Act does not provide an exemption from the CSA.

In March 2021, Aggarwal and two terminally ill cancer patients filed a lawsuit against the DEA arguing they should have legal access to the psychedelic under the right to try laws, but the 9th U.S. Circuit Court of Appeals dismissed the suit earlier this year on procedural grounds.

AIMS in February filed a formal petition to the DEA to reschedule psilocybin from Schedule I to Schedule II, as well as a request for a waiver to allow the patients access to the compound. The agency has yet to respond, and AIMS has submitted a Freedom of Information Act request to DEA on its handling of the waiver and petition.

“I’m a stage four cancer patient. I’m dying and it’s sad,” Erinn Baldeschwiler, a cancer patient involved in the litigation against the DEA, said just before the protest Monday.

“I’ve been fighting for this now for over a year and a half. One of the main points of the case, and of course the right to try laws as they sit, is that patients don’t have time. We don’t have time to wait for FDA approval,” Baldeschwiler said.

“They’re just sitting on our request for a waiver and we’re here to peacefully protest that.”

About two dozen people gathered in front of the DEA building around noon for several hours with signs reading “DEA get out of the way,” while others painted “Right to Try” on the glass windows.

Baldeschwiler was among the 17 protesters who were taken into custody for refusing to leave DEA headquarters.

“It’s really been a shame that it takes this to bring attention to this matter, but hopefully this will bring scrutiny of the DEA’s conduct,” Kathryn Tucker, Baldeschwiler’s attorney, said in a Facebook video.

The DEA did not immediately respond to Changing America’s request for comment.