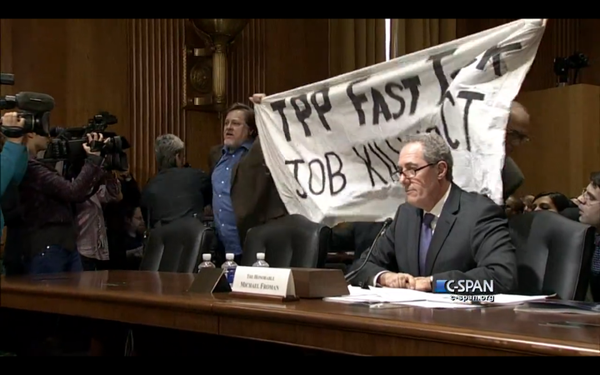 U.S. Trade Representative Michael Froman was greeted with protest at Tuesday’s Senate and House Hearings on Capitol Hill, as people raised concerns about the President’s trade agenda and “Fast Track” Trade Promotion Authority. Activists with signs and banners chanting “No TPP!” and “No Fast Track!” were escorted from the Senate Finance Committee hearing room shortly after the U.S. Trade Representative took the microphone.

The legislation, which Obama requested from both parties during last week’s State of the Union address, would limit congressional oversight of the Administration’s free trade agreements and is widely opposed by hundreds of environmental, labor, public health, food safety, and faith groups nationwide.

Protesters wore shirts reading “No Fast Track” and held signs stating “Froman lies,” a response to the Ambassador’s recent claims that Fast Track is the “best tool to ensure that Congress and the public have ample time to give our trade agreements the public scrutiny and debate they deserve.” Past versions of Fast Track legislation, including one introduced with little support last January, limits the amount of time Congress has to consider agreements and suspends their ability to make amendments to the texts.

Dr. Margaret Flowers, co-director of PopularResistance.org, held a sign that said “Trading away our future” to highlight the devastating impact that the Trans-Pacific Partnership will have on many issues that people care about such as food safety, the cost of medicines, Internet freedom, environmental protection, financial regulation and democracy.

Richard Ochs, a retired steelworker from Baltimore, and Kevin Zeese, Esq also from PopularResistance.org, held a banner that read “TPP Fast Track: Job Killing Act,” which sought to draw attention to the devastating impact past free trade agreements have had on U.S. jobs. While Obama’s State of the Union claimed that the authority would “protect American workers,” unions including the AFL-CIO, Teamsters, CWA, and more have instead spoken out against it.

In fact, there is broad opposition to fast tracking the TPP across the political spectrum and across issues. “Fast Track is far from a ‘done deal’ in the United States and foreign negotiators ought to be cautious before accepting provisions that will harm their population.” said Kevin Zeese. See https://www.popularresistance.org/fast-track-not-a-done-deal-the-people-will-stop-it/.

In addition to the photos below, the DailyDot captured several GIFs from CSPAN footage, click here.