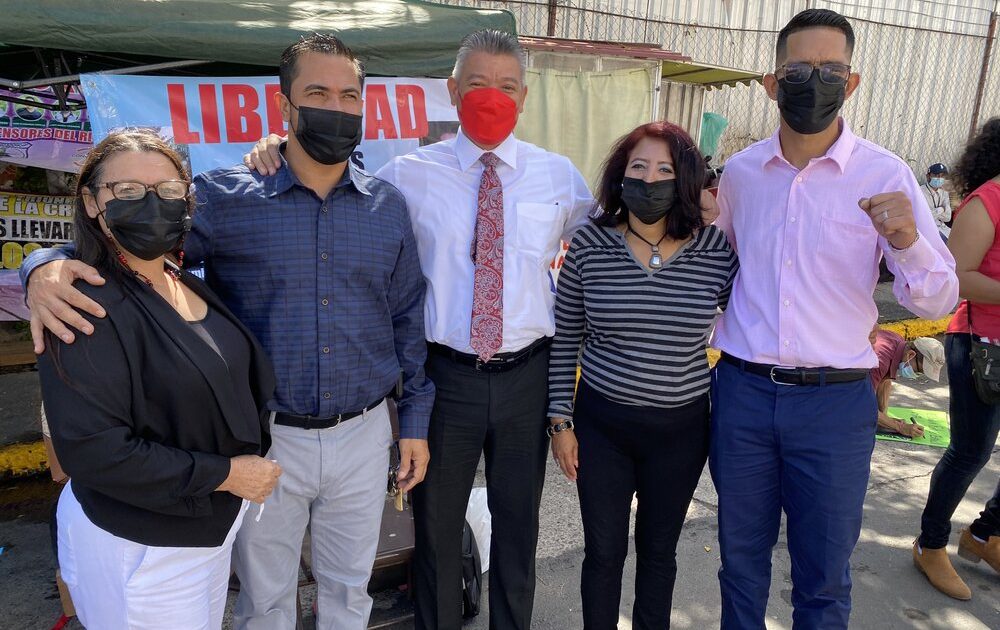 Activists Go On Trial For Protesting Power Grab In Honduras

Above photo: Outside the court on Day One (from left to right): Prisila Alvarado, one of Edwin’s two lawyers; Edwin Espinal; Omar Menjivar, Edwin’s second lawyer; Alba Lopez, member of the Committee for the Freedom of Political Prisoners in Honduras; and Raul Alvarez.

Currently in Honduras, medical anthropologist Adrienne Pine is closely involved with the Espinal and Álvarez trial.

Pine said today: “This Monday and Tuesday, former political prisoners Edwin Espinal and Raúl Álvarez will go on trial in Honduras on trumped-up charges related to their participation in protests during the 2017 Honduran electoral crisis.

“Protests had erupted nationwide after the blatant theft of the November 2017 presidential elections by Juan Orlando Hernández, who had previously orchestrated an illegal takeover of the country’s Supreme Court in order to obtain permission to run for a consecutive second term, in violation of the Honduran constitution. State security forces shot into crowds. Espinal and Álvarez were among over 180 Hondurans who were arrested for exercising their constitutionally-guaranteed right to protest, and 22 who were illegally imprisoned without trial in dangerous maximum security prisons. If found guilty, they face sentences of 15-30 years.

Pine, who is in Tegucigalpa to accompany Espinal and Alvarez and document their trial, added: “The illegitimate and unelected Honduran president Juan Orlando Hernández is able to persecute and torture his opponents thanks primarily to unfailing U.S. support for his regime and complicity in its systemic human rights abuses. Hernández’s major involvement in drug trafficking has been thoroughly demonstrated by the U.S. District Court for the Southern District of New York, and the majority of Hondurans would like to see him tried in court. Instead, Edwin and Raúl are being persecuted for standing up for Honduran democracy and sovereignty.”

Adrienne Pine tweeted reports about the first day of the trial:

Here are some highlights (and lowlights) of what when down today in @EdwinLibertad and Raúl's trial, as I understood them (a thread)

*I'm not a lawyer, so please forgive me for any mis-translations.

2. Raúl’s original charges were property damage, arson, and use of explosive devices; today the prosecution told the judges that the latter two were a mistake. Raúl was in pre-trial detention in a dangerous maximum-security prison for 19 months because of all three charges.

4. The tribunal chastised the prosecution for denying the defense evidence, which should have been presented a minimum of two months prior to the trial and instead was only handed over September 6th, and told them they would report them to their superiors.

6. The second prosecution expert, Rosa Betsaida Sánchez González, testified about phone records and cell towers and kept mixing up her facts and contradicting herself, requiring multiple clarificatory questions from the judges & defense.

Here is a report from the first day from Aqui Abajo:

At approximately 7 am, people started gathering outside the Supreme Court in Tegucigalpa to support Edwin and Raul.

·      At approximately 9:30 am, the judges notified people interested in observing the trial that they would only allow 9 observers into the courtroom. When starting the proceedings at ~10 am, the judges informed everyone that the trial would not be broadcasted online until possibly the afternoon.

·      The trial process begins (as permitted by Honduran law) with the prosecutors and defense presenting additional evidence that was not presented in the evidentiary hearing. Today, the prosecutors mostly just clarified evidence that had previously been accepted by the court. In addition,

·      Edwin’s defense team presented 9 documents outlining the state persecution that Edwin has faced since 2009 and one witness, Mery Agurcia from the Honduran human rights organization, COFADEH. The court did not permit any of the evidence presented by Edwin’s defense arguing that they were irrelevant to the crime being tried and were out of context.

·      Raul’s defense argued that the raid of Raul’s house after his detention was illegal and that all evidence related to the raid, should be excluded.

·      The judges verified the dates that two pieces of evidence had been presented to the court. After discovering that the prosecutors had given the court key evidence just one week before the trial date instead of two months prior (as the court had ordered) the judges warned that they would report this to authorities in the Public Prosecutor’s office. In short, the prosecutors defied a court order violating Edwin and Raul’s right to defense and timely access to evidence.

Justifying and Formalizing the Charges: Prosecutors “Made a Mistake” Charging Raul With Two Additional Crimes

The next step of today’s trial proceedings involved the formalization of the charges against Edwin and Raul. This involves the prosecution explaining and justifying the charges in greater detail.

Charges Against Raul: The head prosecutor Juan Carlos Elvir told the court that the Prosecutor’s office would remove two charges against Raul – “aggravated arson” and “use and possession of homemade explosives”. The prosecutors said that they had “made a mistake” by charging Raul with these additional two charges and instead, will only charge him with “aggravated property damage”. According to the prosecutors, the damage that Raul caused to the Marriott hotel building amounts to 985,610.06 Lempiras [$42,000]. However, in another report submitted to the court, the prosecutor’s office alleges that the total damages to the hotel were ~9,000,000 Lempiras [$375,000].

This “mistake” by the prosecutors, cost Raul 19 months in a maximum-security prison. At the time he was jailed, the prosecutors argued that he should be sent to pre-trial detention because of the seriousness of the charges against him.

If found guilty of this one charge (aggravated property damage). Raul faces 2 to 3 years and 4 months in prison.

Charges Against Edwin: The prosecutor removed the “aggravated damage” charge against Edwin but formalized the charges of “aggravated arson” and “use and possession of homemade explosives.” If found guilty Edwin faces between 9 to 18 years in prison.

For observers, including myself, the main prosecutor, Juan Carlos Elvir stumbled through the technical arguments as to why the prosecution was charging Edwin and Raul with the above listed crimes. It was also obvious that the prosecution had not reviewed the entire legal file, did not prepare the first two witnesses, and struggled to make basic legal arguments specific to the case.

The Court Began to Examine Evidence & Hear from Investigators

·      An analysis of videos of the 911 camera system from street cameras & videos obtained from the reception cameras inside the Marriott Hotel.

o   The videos were played on a small screen that was difficult to see from across the court. They show hundreds of people participating in a protest, specifically at a moment in front of the Marriott hotel on January 12, 2018. It’s hard to identify people in the videos. The video forensic analyst Wilmer Anderson pointed out and focused on two individuals – one wearing a motorcycle helmet and another wearing a red shirt and beige shorts.

o   Police investigator Rosa Sanchez Gonzales clearly confused two separate phone analyses without the prosecutors even knowing it (again, likely because of their lack of knowledge of the legal file and sloppiness). She testified that one cell phone was within several kilometers of the Marriott Hotel during the time of the day when the protest was occurring. The investigator at one point said that the phone was Edwin’s but then said it was Raul’s cell phone. It’s difficult to explain the level of confusion associated with this specific investigator’s testimony.

Tomorrow, the trial is convened for 9:30 am. It’s unclear whether the trial will finish tomorrow given how slowly it moved forward today.