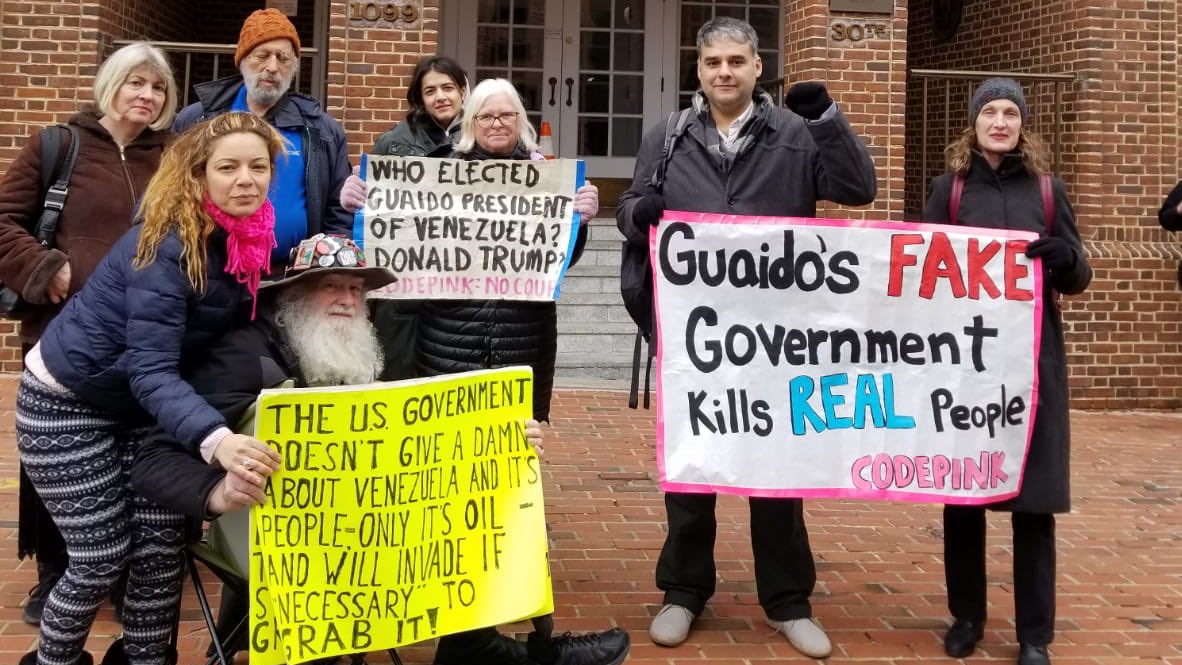 Activists Go To Venezuelan Embassy To Evict ‘Ambassador Vecchio’, Find He’s Not There

Washington, DC – Today, activists with CODEPINK went to the Venezuelan Embassy in the posh Georgetown neighborhood to find out if the Embassy was providing consular services. Leo Flores, a Venezuelan, rang the doorbell but nobody answered the door. When journalist Anya Parampil asked if the Embassy was able to provide consular services, a police officer outside replied, “No, it’s not an actual working Embassy.”

Last week, when the four Embassy Protectors who were arrested on May 16 during the US government’s raid of the Embassy in violation of the Vienna Convention were tried in court, the prosecutor repeatedly stated that it was necessary to remove the protectors so the Embassy could be “returned to Ambassador Vecchio.” In reality, Carlos Vecchio is not actually an ambassador, never had possession of the Embassy and doesn’t have the authority to provide consular services.

When it was established that the embassy was empty, the CODEPINK activists read an eviction notice that outlined the many reasons Carlos Vecchio should not have access to the embassy:

“The Embassy Protection Collective is giving you a thirty-day notice to vacate. You have been found guilty of the following offenses:

Although under normal circumstances you would be able to appeal to a jury of your peers, given that there are no other fake ambassadors in the world, it has been determined that should you wish to appeal, you should return to Venezuela and face justice there for your numerous crimes. Also, you will be held liable for any damages arising from your continuing use and occupancy of the embassy. The Embassy Protection Collective went to great pains to maintain the premises and ensure its cleanliness and maintenance. Any damages to the premises will be charged to your corporate credit cards and is not to be paid by the funds that you received from US taxpayers, including USAID funds, nor can it be paid with funds stolen from Citgo. Finally, if there were damages to the mural in the Hugo Chavez Library or to any of the images of Chavez, Nicolas Maduro or Simon Bolivar, you will be asked to sing “Ooh Ahh Chavez  No Se Va” in front of the US Capitol as an act of public contrition. If you have any questions about this notice, you are welcome to contact the Embassy Protection Collective.”

Police told us “it’s not an actual working embassy” 😬

In its announcement of the action, CODEPINK wrote:

“…to remind Carlos Vecchio, Juan Guaidó’s representative in DC, that he is occupying the Embassy violation of international law. Together, the Collective, which CODEPINK was a major of, defended the embassy for over a month, braving physical and verbal assaults as well as police forces that did not respect our civil rights.  We stood up for international law, sovereignty and the Venezuelan people, earning their admiration and gratitude. But the threats against the Venezuelan people aren’t over, and we have an opportunity to show them that we’re still fighting for them by telling Guaidó’s representatives in DC to leave the Embassy forever.

The Collective final four (as we affectionately refer to Adrienne, Kevin, Margaret and David) still face the possibility of a retrial, but after months of stress, they are relieved at the result. The coalition built by the Collective continues to work together, and reminding Vecchio that the American people don’t recognize him as an ambassador is a great way to keep our movement active.

The EPC’s defense of the Embassy on April 30, during Guaidó’s failed uprising in Venezuela, was a symbol to Venezuelans that Americans don’t support our government’s militaristic foreign policy. It raised hopes during a trying time. Now we have the chance to show them that not all Americans support Guaidó, despite what Speaker Nancy Pelosi and other politicians who support him might think.

CODEPINK played a fundamental role in the creation of the Collective and we have supported the final four since they were arrested back in May. We are hopeful that the mistrial will mark the end of this case, although there is a possibility that the government will retry the case. Now that our spirits are up as a result of the trial, we should take advantage of that to take action in defense of international law and the Venezuelan people.”