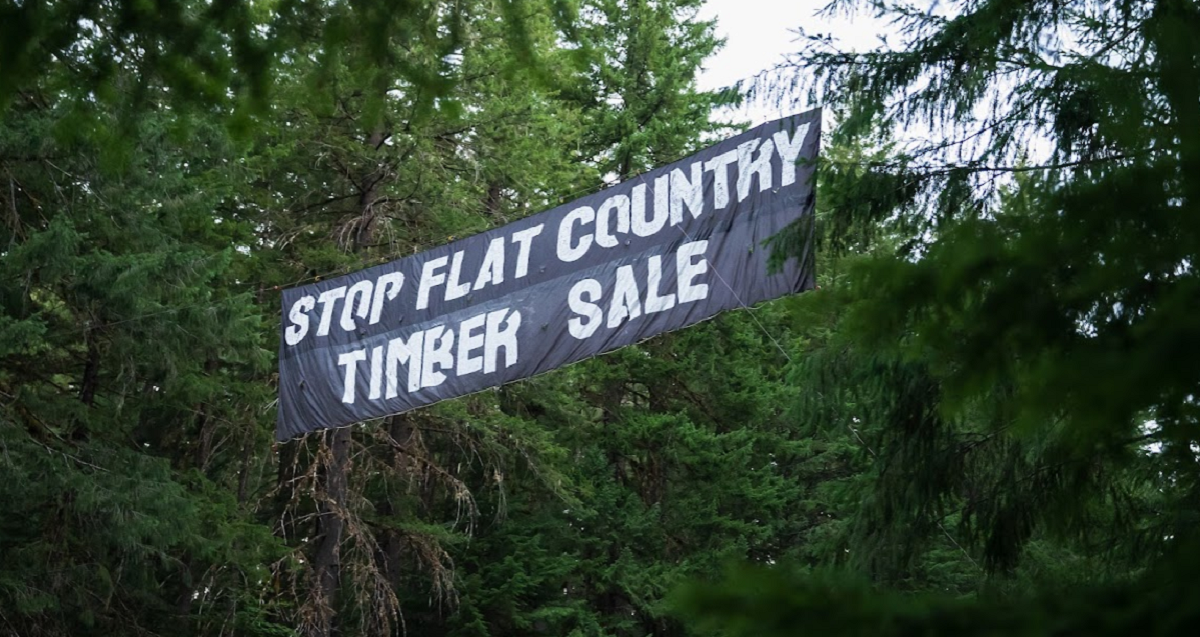 This morning, community members organizing with Cascadia Forest Defenders hung a 30 foot-wide banner across Highway 126 in the Willamette National forest in opposition to the proposed Flat Country old growth timber sale. The organizers are calling on the Willamette National Forest and the Biden Administration to drop the proposed timber sale in light of the significant impacts that it would have on the climate, drinking water, and community safety. The action comes less than six months after President Biden signed Executive Order 14072 on Strengthening the Nation’s Forests, Communities, and Local Economies, which directs his administration to create stronger protections for public forests in an effort to mitigate the climate crisis, and only weeks after environmental groups sent the Forest Service an ultimatum to reconsider the sale.

“The Flat Country old growth timber sale is a travesty for our climate and our communities,” said Daniel Johnson. “We will not stop fighting until this sale is defeated and permanent protections are created for old growth and mature forests across the region and across the country.”

As the Willamette National Forest moves forward with the project, the community is bracing for a fight. With the National Environmental Protect Action (NEPA) process completed, the agency can auction off portions of the project to be logged at any time, with many anticipating that auctions will be scheduled early this fall. In a statement from Cascadia Forest Defenders addressed to industrial logging corporations considering purchasing the timber, the organization stated: “If you buy this sale, you buy us too.” Cascadia Forest Defenders have voiced their intention to escalate their actions against the project throughout the fall.

“As our communities experience first hand the ravages of the climate crisis, it’s completely indefensible for the Biden Administration to continue to sanction the logging of these critical old growth forests,” said Sara Jaymes, an organizer with Cascadia Forest Defenders. “While our politicians decry the continued destruction of rainforests abroad, they are silent as our own rainforests are clearcut for private profit.”

The contentious timber sale, which threatens thousands of acres of old growth and mature forest in the McKenzie Watershed, has been opposed by Congressman Peter DeFazio and prominent forest ecologists Drs. Jerry Franklin and Norm Johnson. Franklin and Johnson are often hailed as the primary architects of the Northwest Forest Plan.

“President Biden claims to be a climate champion, yet his administration is continuing to pursue Trump-era old growth timber sales,” said Clare Grant, an organizer with Cascadia Forest Defenders. “If Biden hopes to leave a legacy of climate leadership, he cannot allow his administration to continue logging these carbon-rich forests.”

The timber sale is in the McKenzie River drinking watershed, and would have significant impacts to the river, and to two of its major tributaries, Olallie and Anderson Creeks. Hundreds of thousands of Southern Willamette Valley residents rely on the McKenzie river for their drinking water. Cool, clean drinking water is also critical to provide habitat for imperiled fish species including bull trout and coho salmon.

If you’re interested in visiting the sale, reach out to the press contact listed above to schedule a time to get into the field. Note that it is about one hour and fifteen minutes from the City of Eugene.

Read the environmental organization’s press release on their recent legal filing and ultimatum regarding the project. Read Rep. Peter DeFazio’s full statements about the Flat Country sale in a story by the Eugene Weekly. Read Drs. Norm Johnson and Jerry Franklin’s opinion piece opposing the project.