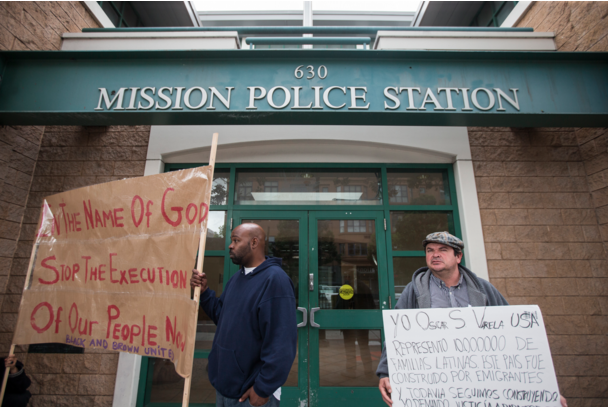 Activists On Hunger Strike Over Suhr’s Job Amid Police Reforms

Above Photo: Activists stand outside the Mission Police Station during a demonstration marking the beginning of a hunger strike calling for the resignation of SFPD Chief Greg Suhr and Mayor Ed Lee in San Francisco, Calif. Thursday, April 21, 2016. (Jessica Christian/S.F. Examiner)

A local rapper, his mother and a candidate for city supervisor are among four activists who have pledged to forego eating until San Francisco Police Chief Greg Suhr resigns or is fired from his position as top cop in The City.

The protesters — Ilych Sato, also known as Equipto; Maria Cristina Gutierrez, the head of a preschool and Sato’s mother; Edwin Lindo, who is running for District 9 supervisor; and San Francisco-native Ike Pinkston — began their hunger strike in front of Mission Police Station on Thursday morning, calling for Mayor Ed Lee to fire Suhr.

Suhr has been at the center of criticism following four high-profile police shootings of black and Latino men in The City since 2014, when Alejandro “Alex” Nieto was killed while carrying a stun gun on Bernal Hill. In the latest incident, two officers from Mission Station shot and killed a homeless man named Luis Gongora who was reportedly waving a knife April 7.

“We’ve exhausted every possible avenue to seek justice for the black and brown community here in San Francisco,” Lindo said outside the police station, where the activists and a group of children who accompanied them called for peace. “How many more killings is it going to take?”

In response to the outrage, the San Francisco Police Department has begun to institute a series of reforms including revising the department’s policies on the use of lethal force. The SFPD has also been in negotiations with the police union over equipping officers with body cameras by the end of the year.

Police Commission President Suzy Loftus said Wednesday at the commission meeting that the Department of Justice, whose Community Oriented Policing Services office launched a review of the SFPD in February, will release a written report on the draft use-of-force policies in early May.

Loftus said there are still a handful of key areas of concern that need to be talked out at community meetings before the policy heads to a vote. The current use of force policy was written in 1995.

But the forthcoming reforms do not appear to be enough for protesters who are calling for Suhr’s job.

Sato has become a prominent figure in protests against police violence since the SFPD shot and killed Mario Woods last December, interrupting the mayor’s public speeches on numerous occasions. On Thursday he said his goal is to “shift the paradigm” in city government.

His mother, Gutierrez, has gone on a hunger strike once before. For a week in 1980 she called for the release of political prisoners at the Colombian consulate in The City.

This time around, she has again decided that “enough is enough” and the public needs to know that police in San Francisco have been shooting and killing minority men.

“I had this feeling in my heart that maybe we’ll be able to make a little big of change,” said Gutierrez, the executive director of Companeros Del Barrio Preschool.

Lindo, the supervisorial candidate, acknowledged the reforms that Suhr has begun to institute but said “even the most community-oriented police chief that we have has four homicides on his hands.”

“Power concedes nothing without without demands,” Lindo said. “And sometimes that takes people going hungry.”

Pinkston said he is worried about the safety of his two young children after recent police shootings.

“This has to stop, there’s no reason for this to continue,” Pinkston said. “I’ll stay out here for however long it needs to take.”

The group brought blankets are chairs to camp out in front of the police station and said they prepared to be hospitalized before leaving.