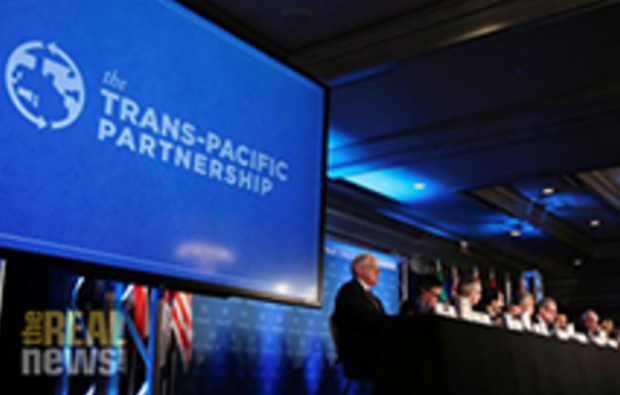 Above Photo: From Therealnews.com.

The TPP is now one step closer to becoming a reality. The Trans-Pacific Partnership, one of the world’s biggest and most controversial multinational trade deals, was signed by twelve nations, including the United States. Protests took place around the world with many people worried about its impact on workers, the environment, and the legal power it gives to corporations to circumvent federal regulation through trade tribunals. Here’s what the United States trade representative Michael Froman had to say about it.

MICHAEL FROMAN: I’m confident at the end of the day, because of the strong benefits to the U.S. economy, which have been estimated to be over $130 billion a year of GDP growth, as well as more than $350 billion of additional exports, that members of Congress will see the benefits for their constituents, and it will have the necessary bipartisan support to be approved.

DESVARIEUX: Now to discuss all of this and the benefits that Mr. Froman laid out, who does it actually benefit, is our guest, Margaret Flowers. Margaret is the co-director of PopularResistance.org, and she’s actually read the 5,544 pages of the entire TPP deal. Margaret, thank you so much for joining us.

MARGARET FLOWERS: Thank you for having me, Jessica.

DESVARIEUX: So, Margaret, you just heard what U.S. trade representative Michael Froman had to say about the deal. My first question, when he talks about the benefits, who, who is this benefiting? And, and at what cost?

FLOWERS: Right. So that’s interesting. The Center for Economic and Policy Research did a study of the Trans-Pacific Partnership and found that for those who are in the top 1 percent, they would gain wealth from the Trans-Pacific Partnership, but that for the rest of the country, particularly in the lower 90 percent, would likely see a fall in their wages. Even the very conservative Peterson Institute has said that growth in GDP will be very small. The World Bank basically issued a report saying that the U.S. would see a small rise in GDP. And Tufts University actually predicted that our GDP would fall, and we would lose jobs as a result of the TPP.

So if there are any gains they’ll be really moderate, or mild. And don’t really risk, you know, aren’t really worth risking the harm that this agreement can do to us.

DESVARIEUX: Okay, let’s get into some of that harm. As I mentioned before, you’ve read the thousands of pages of the TPP, bless your heart. Let’s, let’s look at some of the specific language that’s in the deal. Can you just lay out for us what stood out to you as some red flags?

FLOWERS: Sure. So one area that’s very concerning is in the area of environmental protection. And in the Trans-Pacific Partnership, the language is extremely vague. Basically he’s saying that countries should strive to ensure high environmental protection. But that doesn’t really, that’s very vague language that’s not enforceable and doesn’t lay out what they should be doing. In fact, for people who are concerned about the climate crisis, and I think that should be most of us, they don’t even use the words climate change in the whole agreement. And this is–consider, this is a binding agreement, whereas the agreement that was made in Paris, the climate treaty, is a voluntary agreement. So this actually supersedes that voluntary agreement.

DESVARIEUX: So talk about some more of the specific language in the deal. Can we pull out some examples?

FLOWERS: Right. So, one of the things that’s really interesting is that they say that environmental protection laws should not be used as a way to disguise restrictions on trade and investment. So if you basically tease that out, the Trans-Pacific Partnership, like other trade agreements, has what’s called a trade tribunal. This is a legal system, a court system that exists outside of and above our own national legal system. So it’s higher than our Supreme Court.

And this is a court system where corporations now, under TPP, can sue governments if our laws interfere with their expected profits. So if we pass a law that basically provides protection of the environment in some way, maybe we ban fracking. That would be great. Or stop offshore drilling. A foreign company can then sue our government and say that that law interfered with their profits and sue us for loss of expected profits.

Now, what this typically does and has done in the past is that it actually changes the country’s law, because rather than facing billions of dollars in fines, countries would just rather repeal those laws and not have to deal with that.

DESVARIEUX: There will be some people, though, Margaret, that argue that how can we say the system is rigged in favor of corporations when we have examples of corporations actually losing in these trade tribunals that you just highlighted? Just recently there was a case where tobacco giant Phillip Morris sued Australia, the government of Australia, for its packaging laws that required cigarette packages to show graphic images of the negative health effects of tobacco. So there was a three-member arbitration tribunal at the permanent court of arbitration at the Hague, and it ruled in favor of the Australian government. So what do you say to those that say, look, there’s an example of the system not being rigged?

FLOWERS: Yeah, that’s a really interesting case. First off, we’re not saying that every case favors the corporations, but in the vast majority, more than 90 percent, they do favor the corporations that are suing. But that particular case was unusual. The Australian government, first off, had to spend $50 million defending themselves against that case. And they won it on the base of going after a procedural piece of it, not after–they didn’t have to actually go through the question through the trade tribunal that would have caused them likely to [inaud.]. They used something to circumvent that, by focusing on procedure.

DESVARIEUX: Okay. Okay. So let’s kind of fast forward a little bit and talk about the TPP. Now that it’s been signed, what’s the next step for organizers like yourself to fight the deal? Doesn’t it still have to be ratified by Congress?

FLOWERS: That’s right. The signing of the Trans-Pacific Partnership starts a two-year clock within which the TPP countries need to ratify it in their home countries. And there are requirements that at least six countries ratify it in that two years, representing at least 85 percent of the GDP that’s impacted by the TPP.

So for us here in the United States, that means that the Obama administration has to send what’s called implementing legislation to Congress. And once they send that legislation to Congress it is passed, or reviewed using a fast track mechanism. Which means they have to vote on it within 90 days. They can’t amend it. And they can’t, they have very limited debate of it. So basically, the president is going to be waiting until he thinks he can get the votes before he introduces it and starts that clock.

DESVARIEUX: And, and you, I’m sure, are going to make sure that he doesn’t get those votes.

FLOWERS: Right. So that’s our, our job as people who will be hurt by this agreement, which includes most of us, is to make sure that the Obama administration never feels confident that they have those votes. And so yesterday and today, there were protests going on all across the United States, about 40 cities involved in those protests, as well as we’re connecting now globally with other activists in these TPP countries. And there were actions yesterday, and there’ll be some more today, in six other countries. In fact, in Auckland, New Zealand, where the agreement was signed in a casino, more than 1,000 people came out and participated in nonviolent disobedience, of shutting down intersections, shutting down a bridge. And then later that day 10,000 showed up to march through the streets in protest.

So we’re going to continue working with allies around the world, and continue to escalate our actions. People will be particularly focused on their members of Congress during the break, February 14-21. So we really encourage people to get involved, to learn more about this. We need to stop this. And they can do that at FlushTheTPP.org.

DESVARIEUX: All right. Margaret Flowers, always a pleasure having you on the program. Thank you so much for being with us.

FLOWERS: Thank you for having me.

DESVARIEUX: And thank you for watching the Real News Network.