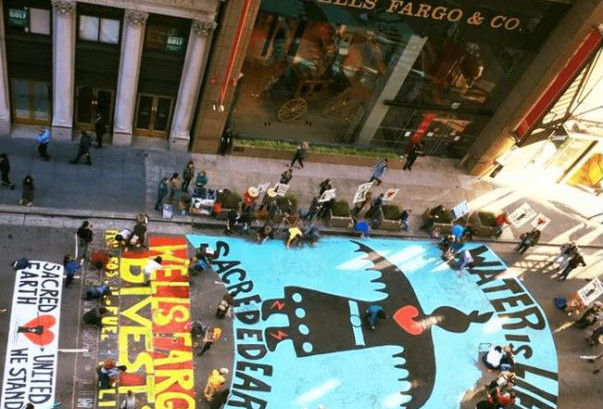 Above Photo: From earthfirstjournal.org. The guerrilla mural project was done in protest of the corporation’s relationship with fossil fuel companies.

San Francisco, CA – The Wells Fargo and Co. headquarters at 420 Montgomery St. had a colorful awakening Monday afternoon, as hundreds of activists armed with paint created a large mural on the pavement outside. The group successfully shut the street down around noon, and in the span of about two hours, painted a 35-foot blue and black “thunderbird woman” on the asphalt, with “Water is Life!” emblazoned across the top.

“It was kind of a collaboration between a whole bunch of people,” Northern Ontario-based artist Isaac Murdoch tells SF Weekly. “We’ve talked about coming down to the area for a while, so we put some feelers out.”

Those feelers resulted in collaborations between Bay Area group Idle No More,  350.org, and members of Greenpeace. Someone loaned Murdoch and his crew a warehouse to make their stencil, and “it came together quite easily,” he says.

Murdoch and arts collective Onaman have done their fair share of art around the country, in Standing Rock and at other locations, but this was the first piece they’d painted on the street.

And they had lots, and lots, of help. Around 200 people turned out for the event — more than Murdoch had anticipated. “It was the people that made this really beautiful. We were just this one big family — even just for an hour and a half. It’s really really cool. It was all sorts of people, all different kinds. We were singing songs, we were so glad to be there. It was phenomenal.”

Even the San Francisco Police Department, who sent officers to the scene, reacted with respect. Murdoch says an officer told him that they respected the group’s expression of free speech, and were just there to enforce safety.

While the event went smoothly, the cause that drew people together was one of a serious nature. “It’s pretty fair to say that we’re in a time of abrupt climate chaos,” explains Murdoch. “Ecosystems all over the planet are collapsing. It’s really unethical and very distrusting that these large banks and corporations are still investing in fossil fuels. Part of what happened today was a message that it’s time to divest, and build a new future for our children.”

Murdoch recorded much of the event on Facebook live. As sirens sounded in the background in his last video of the day, he noted that the mural will not be permanent. “They’re sending the water trucks here right away,” he says. “The fire trucks are here, all the police are here. They’re going to shut down pretty soon, and they’re going to hose this image into the drain.

“Of course the paint we used — it doesn’t hurt anything,” he adds.