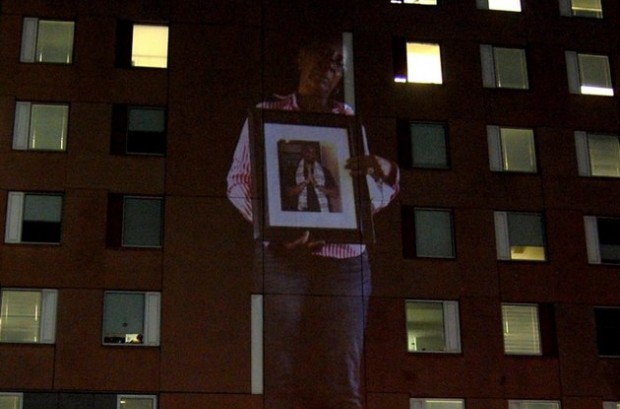 Activists Project Black Bodies On The Facades Of ‘Racist’ Institutions

Above Photo: WE ARE WATCHING. A projection of a mother holding a picture of her slain son on the Boston Police Department building.

The #WeAreWatching project takes street art and activism to a new level.

On the evening of Sept. 1, something unusual took place in the Jamaica Plain section of Boston, Massachusetts. Huge projections appeared on the sides of the abandoned homes in the area, homes which had once housed a longtime community of African-American tenants but now stood empty, the property of real estate company City Realty.

Large and looming, the projections were somber video portraits of some of the hundreds of tenants who were displaced from the community this year in order to make room for 70 luxury apartments that City Realty has in the works for development. Their images sent a simple, but strong message: “Gentrifiers and developers, we are watching.”

“We Are Watching” is the name of this ongoing project which, over the last month, has continued in locations all over the city of Boston. Multi-story projections of black people from the community have appeared on the faces of buildings including the Boston Police Department, the Massachusetts Correctional Institution Framingham and the Boston Housing Court ― institutions that have historically targeted and disenfranchised communities of color.

Initiated by an anonymous group, who choose to be referred to collectively as We Are Watching, the project challenges crooked corporate landlords, police brutality and Boston’s broken prison and jail system with powerful images of the African-American and Latino communities who are affected by them. In one image, projected onto the face of the Boston Police Department, a mother holds up a picture of her slain son.

The group is a collective of artists and activists who began meeting in 2014, galvanized by protests that sprung out of the deaths of Eric Garner and Michael Brown. Together, they were inspired to launch the “We Are Watching” project, in an effort to call out institutions that they believe devalue black lives.

“We wanted to symbolically flip the power dynamic between institutions that exert massive amounts of control over peoples’ lives and the people themselves on whose consent these institutions ultimately depend,” We Are Watching told The Huffington Post, adding, “We wanted to use the stark, visual language of projected video to resonate with people’s sense of outrage, grief, and yearning for justice and liberation.”

The process for creating and projecting each piece begins with a dialogue between We Are Watching and the several organizations with which it has collaborated, including the Young Abolitionists, the Boston Coalition for Police Accountability and City Life/Vida Urbana. The organizations work together to craft their statement for the targeted institutions.

Another institution targeted in the series, the Boston Police Department, has been enacting a racist stop-and-frisk policy for years. According to a 2015 study by the ACLU, 63 percent of police-civilian encounters involved people of color. And so, with these realities in mind, the projections are a “symbolic reversal of power” for We Are Watching.

The response to the project has been supportive, both within the community and on social media, where We Are Watching has launched a vigorous campaign to raise awareness.

Of the reactions from the targeted institutions themselves, the group told Huff Post that they have been questioned by police, but that the projections haven’t been shut down because, according to current law, they are entirely legal.

The group noted: “A judge in Nevada recently ruled that projecting onto the facade of a building can’t be considered trespassing, because if shining light onto a building is against the law, you’d have to outlaw streetlights or the sun.”

So the project continues, brilliantly melding art and activism by taking up space and giving a voice to the black and brown people in the community who have been silenced and ignored. It’s all about shining a light, working in some small way to contribute to a larger movement that emphasizes the value of black and brown lives.

And for We Are Watching, anonymity remains key to the spirit and the goal of this ongoing series.

“Our work is to honor their legacy and to support the organizations and groups who are working to dismantle the racialized system of control that has existed in this country since its inception.”