Above Photo: A Palestinian activist sticks a sign bearing the Palestinian name of Ein Albeida spring over an Israeli street sign with the name Avigail Spring, south of the village of Yatta near Hebron in the occupied West Bank on January 3, 2020.HAZEM BADER / AFP VIA GETTY IMAGES

Recently, nonviolent Palestinian activist Kifah Adara drew water from the Ein Albeida spring near her West Bank village of Al-Tuwani for the first time in 15 years. The spring is a natural water source that was used by Palestinian communities in the region for generations, but a decade and a half ago, nearby Israeli settlers started swimming in the spring, which dirtied the water and made it unsuitable for drinking. For years, due to settler violence and intimidation tactics, Palestinians couldn’t access the spring at all.

That all changed after a massive nonviolent direct action in which a group of over 150 Palestinian, Israeli, and diaspora Jewish activists reclaimed and rehabilitated Ein Albeida, thereby enabling Adara to walk from her village to fill water buckets for the first time since her youth. “I remember coming to this spring with women from my village to collect water for our families,” Adara said after the action. “We would travel 1.5 kilometers on our donkeys, just like we did today. Once Israeli settlers began swimming in this spring, it was no longer safe for us to drink. For many years, we could not access the spring at all. I am so happy to be back at this spring. I hope that, through the work we started today, the people of this region can use this water again.” 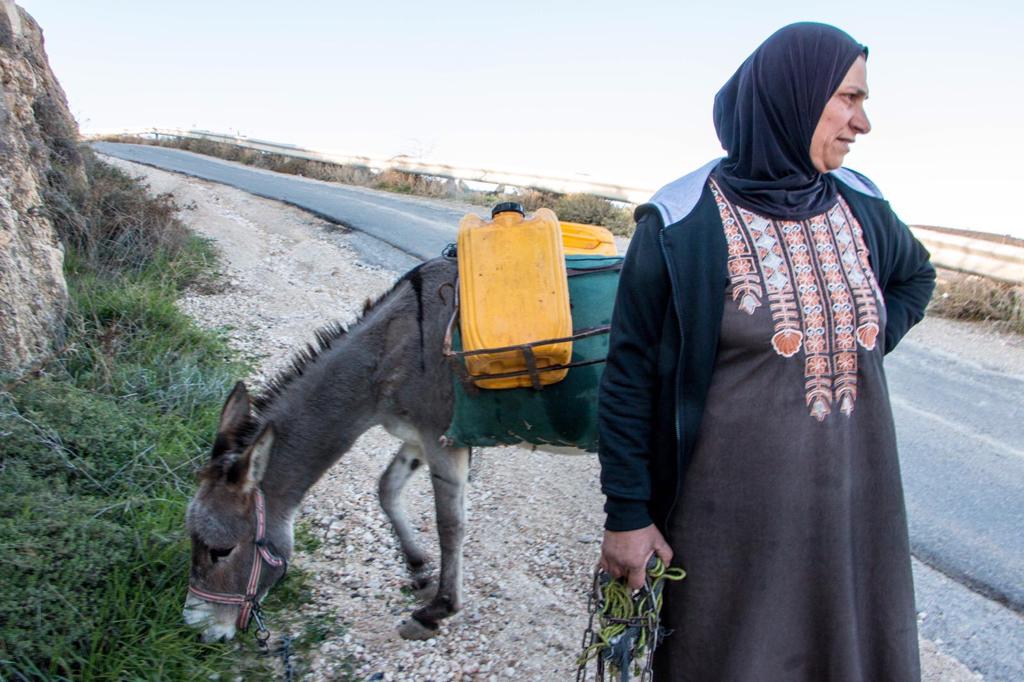 Ein Albeida, which means “White Spring” in Arabic, is the only natural water source for people living in Al-Tuwani and other nearby villages. The spring is also near Avigayil, an illegal Israeli outpost established in 2001. Settlers living in Avigayil have access to electricity and running water provided by the Israeli government, despite the outpost being considered illegal under Israeli law, while the Palestinian village of Al-Tuwani lacks these services. This is representative of one of the many structural inequalities of the Israeli occupation in the West Bank, where services are systematically denied to Palestinians while brazenly given to Israeli Jewish settlers.

The coalition of activists who participated in the action with Adara joined her to show their solidarity with the Palestinian struggle against occupation and to assert their commitment to justice in the region. Adara invited the Israeli and diaspora Jewish members of this coalition to demonstrate their commitment to Palestinian solidarity by leveraging their privilege, as Jews, to protect her and other Palestinian activists from settler and state violence.

I participated in the action through a delegation with the Center for Jewish Nonviolence, a group that brings Jews from around the world to engage in nonviolent direct action and co-resistance projects alongside Palestinian and Israeli partners. My participation is central to my academic research investigating Jewish anti-occupation activism and the politics of Jewish identity.

My research points to two important things with regard to this delegation and the action to rehabilitate and reclaim Ein Albeida. First, whereas previous research claimed that Jews engage critically with Israeli policies of occupation out of love for Israel and a desire to make it better, many of the activists with whom I am working are instead motivated by a deep commitment to justice, especially for Palestinians. Second, though there are many methods and tactics used to end the occupation, the co-resistance model is one of the most impactful in showing tangible results to improve the lives of Palestinians on the ground. The nature of this organizing model also builds a vibrant, intersectional, and powerful anti-occupation social movement by building trust and relationships through embodied actions.

Co-resistance means that Palestinians, Israelis, Jews from the diaspora and international activists resist policies and structures of occupation in collaboration with one another. In the co-resistance model, Palestinians set the conditions for action and invite partners to join them based on the shared commitments to bring a just and equitable end to the Israeli occupation. Only those truly committed to dismantling the connected systems of oppression that harm communities in Palestine and Israel are invited to participate in co-resistance actions.

Through co-resistance, Palestinians, Israelis and international Jews build alliances across their differences that enables them to resist in relationship to each other. Building relationships structured on resistance is rooted in the tacit understanding that the liberation of one is deeply intertwined with the liberation of another. The co-resistance model demonstrates, in practice and on the ground, the words of Paulo Freire, who wrote in Pedagogy of the Oppressed, “[W]e cannot say that in the process of revolution someone liberates someone else, nor yet that someone liberates himself, but rather that human beings in communion liberate each other.”

As exemplified by the direct action that allowed Adara to return to Ein Albeida, co-resistance shows how the symbolic power of Palestinians, Israelis and international Jews coming together is a model for what a future of liberation and equality for all people who live in Palestine and Israel could look like.

When Jewish activists join together in co-resistance we refuse to enable the occupation.

When Jewish activists join together in co-resistance and engage in projects to make life more livable for Palestinian communities, we refuse to enable the occupation. Co-resistance is therefore a rejection of the continued annexation of Palestinian land and resources, and the erasure of Palestinian life and culture. By engaging in co-resistance, we uplift Palestinian resilience and leadership and show by our physical presence that occupation is not our Judaism. This type of activism is a way of asserting a liberatory Jewish identity based in justice for all people while reclaiming Judaism from Israeli state violence.

In these dark days, co-resistance is a ray of light that inspires hope for the possibility of a more just tomorrow.