Activists Remain In Venezuelan Embassy With Gratitude From Foreign Ministry

Above photo: Embassy protectors pack the Hugo Chavez library for an event with John Kiriakou. By Margaret Flowers.

Washington, DC – Thursday, April 25, the day activists anticipated the Secret Service might evict them from the Venezuelan embassy, turned into a day of growing support for and attention to the embassy protection efforts. Activists are making it clear that they are in the embassy with the permission of the foreign ministry. In fact, on Wednesday night, Carlos Ron, the Vice Minister for Foreign Affairs for Venezuela, sent a video message to the protectors:

“Hello everyone. My name is Carlos Ron. I’m Vice Minister for Foreign Relations for Venezuela. We want to first of all, thank you all for standing up for international law, for the well-being of the Venezuela embassy in Washington. It’s been important to hear your voices, to hear your call for the respect of Venezuela’s national sovereignty, for the respect of popular will in electing President Maduro and for safeguarding our embassy and our premises.

We are glad to hear that you are meeting constantly in the embassy, that you have made it a place where debate, democracy and dialogue can really be established and can really flourish. Hopefully, this is what we can maintain in our premises for a long time.

I know that today you have a very important educational meeting to talk about the way that our region, Latin America, has been constantly intervened by foreign forces and by foreign interests that have attempted against democracy and against social justice.

So, hopefully today will be a very fulfilling encounter and that we help each other to understand our region and to make sure that our countries respect international law and respect justice. So thank you very much for being there, for being in solidarity with us and please remember that the people of Venezuela are always in solidarity with the people of the United States. Thanks.”

The address was followed by a live event with John Kiriakou, a CIA whistleblower who exposed the torture program and went to jail for doing so. He gave an insider’s view of US regime change efforts to a packed and energized room. Did you know the CIA has a special department where agents can go to request a plan for specific US regime change efforts?

Following the live event, embassy protectors met with their lawyers and discussed plans for holding the space as long as necessary so the Venezuelan and US governments have time to complete negotiations over the disposition of their respective embassies.

Calls for support, which went out over the past few days, are having an impact. People arrived from California, Colorado, Massachusetts and surrounding states. People streamed into the embassy throughout the day Wednesday, into the early morning hours and continued throughout Thursday. Greeters scrambled to assist new arrivals with finding a couch or floor space to put their sleeping bag.

Police presence also grew. Secret Service agents and DC police lurked outside as guests arrived for the evening event. Throughout the early morning hours, Secret Service officers cruised by the embassy at regular intervals. At one point, police approached the building, triggering the activists’ mobilization response, but it was a false alarm.

Thursday morning began with an excellent action by Ariel Gold and Lili Taj of CODE PINK, who interrupted Elliott Abrams at the Atlantic Council where he intended to speak about “the future of Venezuela.”

.@ArielElyseGold at imperialist @AtlanticCouncil in front of convicted war criminal and US special envoy to Venezuela Elliott Abrams: “ELLIOTT ABRAMS IS A WAR CRIMINAL! HOW DARE YOU UNDERMINE INTERNATIONAL LAW!” #HandsOffVenezuela pic.twitter.com/ED8nVYki03

Protectors then held a rally and press conference in front of the building. There is now a constant presence of reporters, and police, outside the embassy. Cars and pedestrians slow down to check out the banners and placards. Some protectors remain inside working. 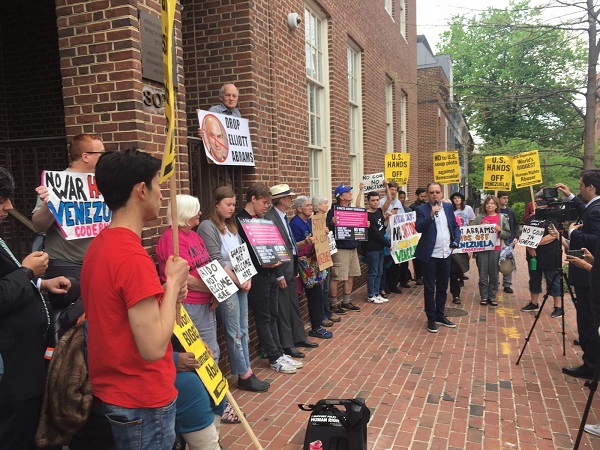 There hasn’t been any communication from the State Department in response to emails that Kevin published last night. When pressed, the Secret Service were unable to elucidate what charge they would use in an arrest since protectors were given the keys to the building and are here with permission of the elected government. Still, protectors know that police could come anytime and are prepared to hold the space nonviolently both as tenants/guests with the right to live here and to uphold the Vienna Convention.

Thursday evening, protectors will hold another public event. Venezuelan Foreign Minister Jorge Arreaza will speak to them virtually. This will be live streamed on the Popular Resistance Facebook Page.

Today, Arreaza had this statement on the Embassy Protection Collective:

“A month ago, the United States government illegally seized our consulate building in New York and two military attaché buildings in Washington. The building that houses our OAS mission and housed our embassy is property of the Venezuelan state. As you know one of our fundamental pillars is from people’s movements from around the world, social groups, progressive groups around the world. These groups have proposed actions, not just the ones you’ve seen, but also legal ones, to protect Venezuelan properties.  They are helping us in that regard and their help is welcome. Because we have to protect it. What they did in the consulate and attaché buildings is a violation of the Vienna Convention on Diplomatic Relations. We have to protect that Venezuelan building. It would be crazy for [the US government] to enter illegally. Have we proposed that for the U.S. embassy in Caracas? Never. Now, if they do it, we would have to think about how to reciprocate in that case. I hope it doesn’t happen. I hope our compañeros and compañeras who have been bravely protecting Venezuelan assets can go home at ease over the next few days if the United States government decides to respect diplomatic and consular conventions and respect the Bolivarian Republic of Venezuela’s assets. The action they have taken is a preventative one which we respect.”