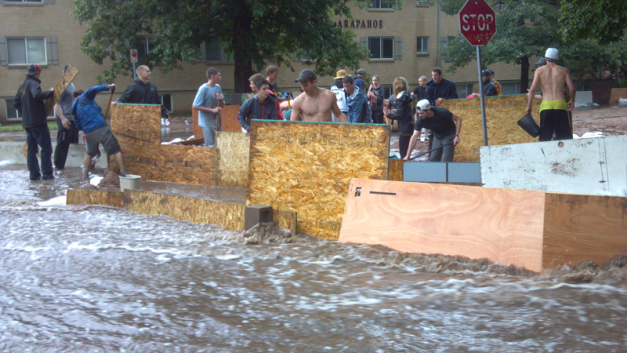 Activists Step Up For Flood Relief In Colorado

Thursday.  I first heard about the coming floods from my wife.  She has friends in Utah, many of whom had been complaining about the dramatic weather since last week.  The storm reached central Colorado on Monday, but brought little more than a light drizzle until mid Thursday.

On Thursday evening I was at home in southern Denver.  It was raining but not out of control.  My wife and I spent the night glued to our computers, assuring our friends and family of our safety, following updates from our Colorado friends, many of whom weren’t so lucky, and trading news stories and weather updates.  There was an interesting moment when a warning spread across our social media pages, declaring that there was a huge wave, as tall as 30 feet, swooping down Boulder Creek and was expected to hit the community within the hour.  The network television news, which we had on in the background, didn’t report the story for another half hour.  Thankfully the channel’s tardiness had little impact because the gulch through which the stream runs somehow managed to accommodate the extra water.

At 9 or 10, I was invited to a page on Facebook named Occupy Boulder Flood Relief, and after joining the group I was invited to a Google Doc which contained a long list of relief organizations, relevant media sources, and other information.  It also had a signup space for people who wanted to help organize relief efforts.   I typed my contact information in and did a few edits on the shared document.  By the time I went to bed at 2am the document also contained an invite to an open meeting for volunteers being held the next day in downtown Boulder.

Friday.  I arrived in Boulder at about 1:30, Friday afternoon.  The drive north from Denver was fine and there were few signs of abnormality, but near Boulder Creek the streets were filled with a layer of mud and soon I found myself being detoured around flooded roads.  After parking, I immediately headed to Boulder Creek, which had been featured on every news channel the night before.  I’d never seen anything like it.  I’ve inner-tubed down this little stream in the past, but now it flowed up over its banks and just a foot short of touching the bridges which crossed over it.  The muddy water was moving down its path at a violent pace and carrying branches and tree trunks along with it.

I walked to the building where the meeting was to be held and found a group of 10 or so people frantically typing on their computers and gesturing to one another as they desperately prepared for the meeting.  An hour later I was facilitating a conversation with about 30 people, mostly college students, who were eager to go out into the community and help the thousands of Boulder residents affected by the flood.  An hour after that, I left with the task of building a website for a budding organization vaguely associated with Occupy Boulder.

At 11 Friday night I got off work and hurried home to get started on the site, but found that while I was at work, other organizers had already built a simple WordPress website.  It wasn’t fancy, but had contact information, and forms for potential volunteers and affected folks to request help.  It even had a reasonably professional looking logo! While at work, I’d also been invited to a related Google+ community page and several more shared online documents.  I felt a little embarrassed that I’d failed to fulfill my first duty, but also amazed at the efficiency of the collective.

Saturday.  I drove to Boulder to meet the group in its new home, an empty bar in a large hotel across town.  In the center of the room was a large round table filled with laptops and surrounded by about 20 busy volunteers.  I knew none of them.  As we spent the day discussing, debating, strategizing, making phone calls, and checking official government reports, we occasionally stopped to watch the continuous storm reporting on the overhead television.  We kept the sound down but could view constant images of flooded homes, destroyed roads, and stranded people.

At one point we took a short break to introduce ourselves to one another.  About half of the organizers had a background in Occupy.  A couple had been involved in New York, and one had helped with Occupy Sandy.  Coincidently, two of us had published books about the movement.  Several others had experience in other forms of service or activism, including a woman who ran a nonprofit which provided relief after a major fire a couple years ago.  The one thing we had in common was that no one knew more than one or two other people around the table.  This was a group of total strangers, who due to strange circumstances, found themselves working closely together for hours on end.

In the afternoon we sent out our first two volunteer cleanup crews, one of which went to the home of a friend of mine, who owns a house a couple miles north of our makeshift headquarters.  Later in the evening I drove up to his house to say hello and see how our volunteers did.  The house holds a cooperative living community which generally houses about 10 people.  When I drove up I found my friend and some of the other residents in the driveway wearing rubber boots and gloves, holding wet pieces of carpeting and ruined furniture.  They quickly thanked me for the help our group had sent and directed me down to the basement, where just two months ago I crashed on a couch for a night.

My feet were splashing in two inches of dirty water, and the refrigerator in the kitchen was on its side.  I asked what had happened to it and my friend explained that when the water was at its peak of 5 feet deep, the fridge had floated up and tipped over.  The house also reeked.  This, I learned, was because the plumbing system had failed, releasing sewage into the basement.

Sunday.  As I write, it is Sunday night.  It’s been raining all day, and we are once again seeing flooding across the region.  And the relief group once again spent all day building infrastructure and organizing volunteer efforts.  In less than three days we’ve sent out five cleanup teams, built a database of 400 volunteers, raised two thousand dollars, established relationships with a dozen other organizations, and built a large online presence and internal digital communications system.

It is still raining outside and fresh information about devastated areas and new evacuations comes in every few minutes.  There is a growing feeling that the damage is absolutely massive, but at this point, no one really knows.  All we can do is organize as quickly as possible and help as many folks as we can, while staying safe ourselves.  But ultimately this is a once in a generation natural disaster that will have permanent impact in central Colorado.  There is nothing that citizen’s groups like Boulder Flood Relief, or more established organizations and agencies can do to avert that fact.