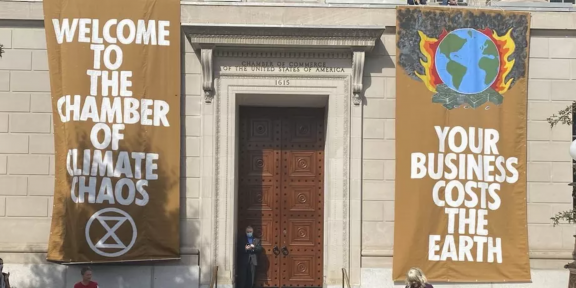 Above Photo: Campaigners hung a pair of banners on the U.S. Chamber of Commerce’s building in Washington, D.C. on October 14, 2021. Resist Line 3/Twitter.

‘Welcome To The Chamber Of Climate Chaos.’

Campaigners asked U.S. Chamber of Commerce members, “Do you want to go down in history as contributing to a climate catastrophe that will endanger the lives of millions of people around the world?”

Amid a wave of climate protests in Washington, D.C. this week, some campaigners scaled the U.S. Chamber of Commerce office to call out the nation’s largest lobbying group for fueling climate chaos and urge members to cut ties with the business association.

Activists flanked the building’s entrance with a pair of banners that said: “Welcome to the Chamber of Climate Chaos” and “Your Business Costs the Earth.”

Extinction Rebellion D.C. tweeted photos and videos of the action alongside a message for the group’s members: “Do you want to go down in history as contributing to a climate catastrophe that will endanger the lives of millions of people around the world? Or will you stand up for the future, for hope and survival, and leave the Chamber of Commerce?”

Dear members of the @USChamber: Do you want to go down in history as contributing to a climate catastrophe that will endanger the lives of millions of people around the world? Or will you stand up for the future, for hope and survival, and leave the Chamber of Commerce? pic.twitter.com/fVRcBZ4Ebb

In addition to the banners on the building, the campaigners had police tape printed with “climate emergency” and multiple signs with messages such as “stop selling our future.”

The action—which came as Indigenous leaders occupied the Bureau of Indian Affairs and #PeopleVsFossilFuels protests continued outside the White House—highlighted critiques long directed at the Chamber of Commerce.

It cited junk science that said people would be healthier with warmer winters. Also in 2009, the Chamber compared climate science to creationism and wanted to put “the science of climate change on trial.”#PeoplevsFossilFuels #climatedenier #planetoverprofit #listentothescience pic.twitter.com/PgPZzEQCX1

Brown University’s Climate and Development Lab earlier this year published an analysis examining the Chamber’s climate policy from 1989 to 2009, based on 41 primary source documents.

“The Chamber has for decades been one of the most impactful leaders of climate obstruction,” wrote Brown researcher Cole Triedman. “It has funded, led, and participated in the Climate Change Countermovement network, contributed to developing and deploying climate misinformation, and today remains one of the most powerful institutions in Washington.”

By 2019, with markets swinging away from fossil fuels and the Republican Party pushed far to the ideological right, the Chamber seized the opportunity to reinvent its climate change policy as bipartisan. In 2021, with trillion-dollar climate legislation being designed, diplomatic and regulatory climate efforts expanding, and climate litigation threatening powerful Chamber member companies, it will be interesting to see if and how the Chamber continues the patterns of 1989-2009—which in this case might mean defensive messaging and policy-specific attacks.

While the recent shift in Chamber public discourse towards the “inaction is not an option” message is encouraging for climate action advocates, the findings of this analysis suggest caution and a heightened level of scrutiny… [The] challenge that the Chamber poses to climate action in 2021 has once again changed form, rather than disappeared.

Reporting on the analysis after its release, Inside Climate News noted that Matt Letourneau, the lobbying group’s managing director of communications, declined to comment on Triedman’s findings but said that “we are proud of the work we’re doing across the broad Chamber membership to bring meaningful, achievable solutions to the global climate challenge.”

As Common Dreams reported Wednesday, representatives for the Chamber and its fellow lobbying group the American Petroleum Institute as well as fossil fuel giants BP, Chevron, ExxonMobil, and Shell are set to testify at a congressional hearing about Big Oil’s contributions to climate misinformation scheduled for October 28.