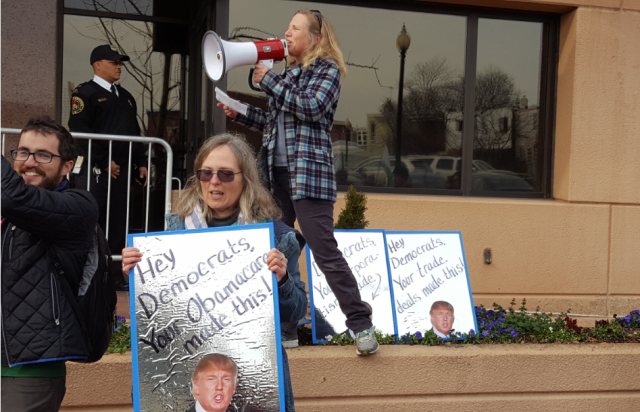 Activists Tell Democrats To Reflect On What They Created

All photos by Kevin Zeese.

Democrats Told to Look in The Mirror: You Created Environment for Trump

Washington, DC – On January 19, as the city filled with Trump supporters in celebration and anti-Trump organizers planning inaugural actions, protesters marched to the Democratic National Committee (DNC) office with drums, banners and mirrors to highlight how the Democrats’ betrayal of voters created the political environment where Donald Trump could become president of the United States.

“We went to the DNC to tell Democrats that they are the reason that voters selected Donald Trump to be the next president of the United States. The problem is bigger than Donald Trump, it is the two-party system where both parties respond to the wealthy and not the people,” said Margaret Flowers, MD of Popular Resistance. “Many policies the Democrats attack Trump for, they themselves have been guilty of from mass deportation to a health law written for the medical industry instead of patients, the expansion of nuclear weapons and continuing the oil-based economy in the face of climate change.”

Voters held up mirrors and and chanted, “Democrats betrayed the people, we’re fed up with lesser evil” and “Look in the mirror, what do you see? Trump is the Democrats’ legacy” to tell Democrats that their pro-big business policies created a political environment where voters fled the Democratic Party. They also held a massive banner before their headquarters saying “Betrayal” to emphasize that the party betrayed their voters with their Wall Street and war policies.

Activists took turns speaking out on issues of militarism. worsening of the wealth divide, trade deals like the Trans-Pacific Partnership and all-of-the above dirty energy.

“Voters sent Democrats a message on election day and we are highlighting that message today: represent your voters by creating an economy for the people and planet or continue to lose elections to terrible Republican candidates that should be easily beaten,” said Bill Moyer of the Backbone Campaign.

“People also need to know that ping pong politics, going back and forth between two big business parties, will not bring the transformation we need. It is time to break out of the duopoly and support the people’s necessities and protect the planet,” said Kevin Zeese of Popular Resistance, “And that means building an alternative political party in the US that is of, by and for the people.”