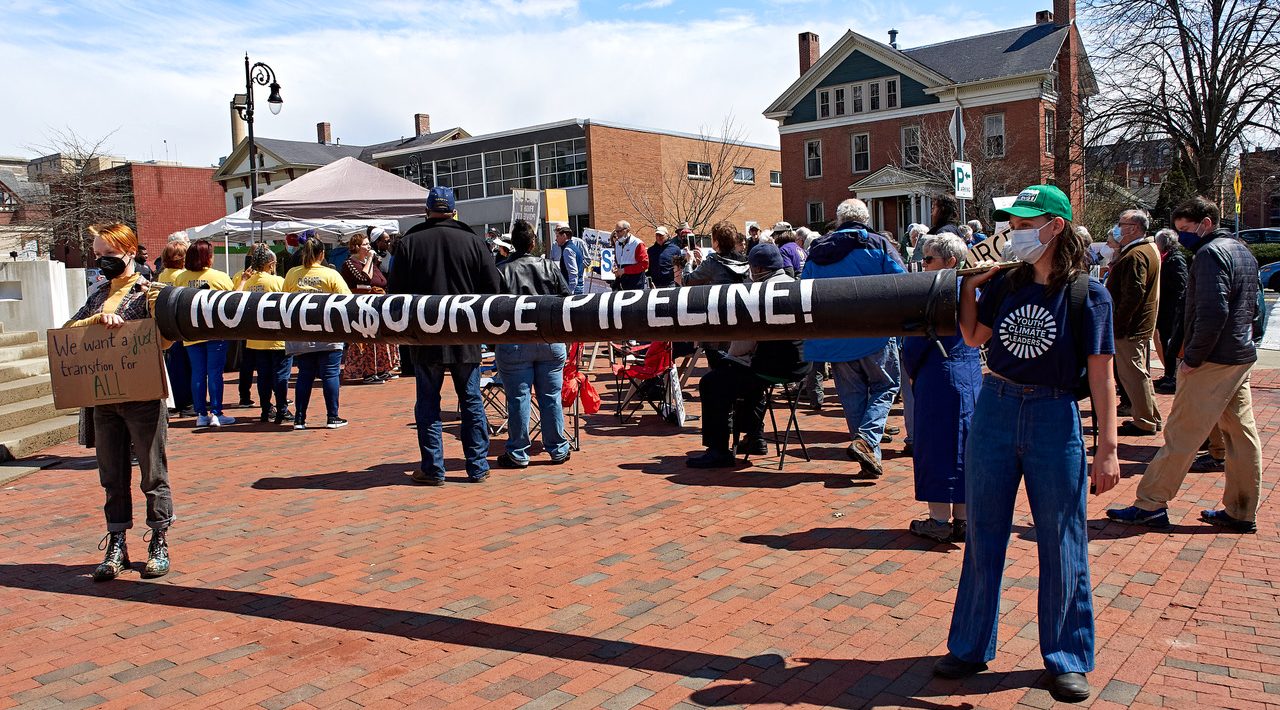 Massachusetts – Under the threat of the proposed Eversource pipeline and stormy skies, 200 residents from Springfield, Longmeadow and across the Commonwealth demanded that Eversource cancel the Proposed Springfield-Longmeadow gas pipeline.

The Springfield Climate Justice Coalition and the Longmeadow Pipeline Awareness Group along with 57 co-sponsoring organizations, many from Springfield, came together on Saturday afternoon, April 9th to say “No!” to Eversource’s proposed Springfield-Longmeadow natural gas pipeline. Cut short by flashes of lightning and the cry of thunder, the rally ended for safety reasons, resulting in the large crowd hearing only half of the speakers waiting their turn to take a stand against this proposed pipeline.

This high-pressure pipeline would originate at a new point of delivery (POD) station in Longmeadow, travel under major roads, through residential neighborhoods in Longmeadow and Springfield, including many environmental justice communities, to connect with the Bliss Street Regulator Station in downtown Springfield.

This rally is a registered event participating in Green Faith’s Sacred Season for Climate Justice. In a written statement, Rev. Dr. Margaret Bullitt-Jonas, Missioner for Creation Care for the Episcopal Diocese of Western MA and Southern New England Conference, and United Church of Christ summarized several of the important themes raised by the speakers.

“Local opposition to this toxic pipeline has been fierce. Arguments against the pipeline include its negative impact on public health, its risk of sparking fires and explosions, its high cost to ratepayers, and its acceleration of climate change just when the Intergovernmental Panel on Climate Change has declared a “code red” for humanity. Does it make sense to increase Springfield’s long-term dependence on “natural” gas when Massachusetts’ Climate Roadmap Bill mandates a transition away from fossil fuels?  The two groups that organized the rally – the Springfield Climate Justice Coalitionand the Longmeadow Pipeline Awareness Group – contend that Springfield will reach a state of energy resilience and reliability only when our energy network is diversified and localized with renewable energy.”

“Eversource calls this a reliability project, but I am here to name it for what it is: an expansion project. Eversource is pursuing this project because they will make money on it. It would cost an estimated $35-45 million dollars, funded by rate-payers. New pipe in the ground is capital investment, which gives them more money for their shareholders, again funded by their ratepayers. By us. And what happens as the transition to clean and green energy moves forward? That shiny new POD station and pipeline will become so called “stranded assets”, whose bill will fall on those who cannot join the energy transition because they do not own their home or cannot afford to make the switch to greener more efficient electric options. That bill will fall hard on Springfield, where many of us are already struggling to make ends meet” stated Naia Tenerowicz.