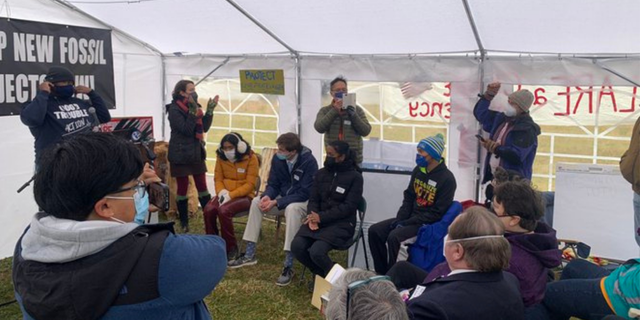 Above photo: Protesters from Occupy Biden hold a protest near the president’s residence in Delaware. Echo Alford.

Dover, DE – A coalition of progressives and environmental groups are challenging lawmakers to sign on to a set of green New Year’s resolutions to kick off the 2022 session. Says participant Phillip Bannowsky, “this is a way to separate the committed from the compromised.”

The activists claim in their text that confronting the climate crisis “has been impeded by the short-sighted interests of powerful economic players.” Specifically, they call for a Green Amendment to the Delaware Constitution and support current legislation in the pipeline, including HB 259, requiring an emergency alert system to inform citizens when disasters like Croda’s November 25, 2018, toxic leak erupted, which injured workers at their Atlas Point plant as well as neighbors and motorists on the Delaware Memorial Bridge.

The coalition is sending out the New Year’s Resolutions to lawmakers at the opening of the legislative session January 11 and initiating a campaign of personal contacts and meetings to secure commitments.

The resolutions are not meant to be an all-inclusive list. Delawareans need the adoption of HB22, the Right to Repair Bill, and SB134 to reduce Styrofoam, as well as movement toward a zero-waste future and conversion to renewable energy and clean transportation. “However limited our list,” says Bannowsky, “we’ll see who affix their John Hancocks and who serve the fossil kings.”

Whereas the people of Delaware have elected us, their legislators, to place the interests of their well-being and that of the planet at the forefront of our actions, and

Whereas confronting the climate crisis, an existential threat to humanity, has been impeded by the short-sighted interests of powerful economic players, and

Whereas the New Year is traditionally a time to take stock and recommit ourselves to the environment and the home of our constituents and ourselves,

Therefore, we members of the Delaware General Assembly do solemnly affirm and commit ourselves to the following Green New Year’s Resolutions: