Activists To ‘Escalate’ Opposition To Trump Policies Toward Venezuela, Iran

Above: Rally and protest at the Venezuelan embassy against US attempts to install an illegitimate ambassador. Photo by Ted Majdosz

Activists opposed to the Trump administration’s plans to overthrow the Venezuelan government returned to the Venezuelan embassy Saturday afternoon to express their support for the group of people known as the Embassy Protection Collective, four of whom were arrested Thursday by U.S. police agents who entered the embassy without the permission of the government of Venezuela.

One day after their release from jail, the four collective members were among the nearly 200 people who rallied and marched to the White House. Margaret Flowers and Kevin Zeese of activist group Popular Resistance, academic Adrienne Pine and Code Pink member David Paul were released from jail Friday afternoon after appearing in federal court on a misdemeanor charge of interfering with State Department diplomatic protective functions.

A federal judge ordered the activists to keep at least 100 feet away from the Venezuelan embassy and other buildings owned by what the judge referred to as the Trump administration-recognized government of Venezuela. The defendants’ next court date before the U.S. District Court for the District of Columbia is scheduled for June 12.

On Saturday, the four activists followed the judge’s order not to go within 100 feet of the embassy. Instead, the four joined the march as it made its way toward M Street in the heart of the Georgetown neighborhood of Washington on its way to the White House.

After marching for about a mile, Zeese said in a speech on Pennsylvania Avenue in front of the White House that the actions of the Trump administration against the Embassy Protection Collective would not deter future protests against U.S. policy toward Venezuela, Iran and other countries. 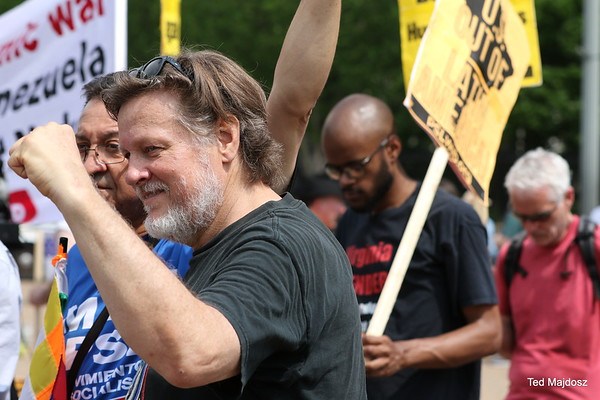 The protests are “going to escalate and grow,” Zeese said.

“This is just the beginning of a movement that is going to be growing over the next half-dozen months,” Zeese said. “It’s a major issue in the 2020 elections so that no one running for office can be in support of a U.S. coup in Venezuela. We are going to change the narrative.”

According to legal experts, the Trump administration violated international law by sending police agents into the building without permission of the government of Venezuela.

Zeese chided the corporate news media for their lack of coverage of the standoff at the Venezuelan embassy.

“In their silence is their complicity. They are showing what side they are on by not covering a historic event. The first time ever that U.S. citizens have gone into a foreign embassy to stop a U.S.coup. Never happened before. But it’s not good enough for CNN or MSNBC to be out there,” he said, citing the virtual news blackout of the standoff.

In the few instances in which the corporate news media covered the event, they neglected to explain that the U.S. government’s raid on the Venezuelan embassy–protected diplomatic territory under the Vienna Convention–represented the first time the United States has violated this particular treaty. 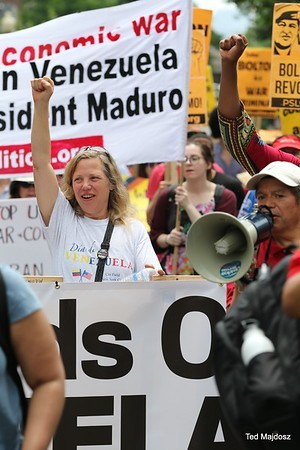 Embassy Protector Dr. Margaret Flowers say she was sustained by supporters outside the embassy. Photo by Ted Majdosz

“We denounce these arrests, as the people inside were there with our permission, and we consider it a violation of the Vienna Conventions,” Venezuela Deputy Foreign Minister Carlos Ron said Friday in a statement. “We do not authorize any of the coup leaders to enter our embassy in Washington, DC. We call on the U.S. government to respect the Vienna Conventions and sign a Protecting Power Agreement with us that would ensure the integrity of both our Embassy in Washington, DC and the U.S. Embassy in Caracas.”

Outside the Venezuelan embassy Saturday, there were no signs of pro-coup Venezuelans who had spent the past few weeks continuously blowing their sirens and horns, disturbing residents of the Georgetown neighborhood.

In her address to the crowd, Flowers thanked the people who showed up to demonstrate their opposition to the takeover of the embassy by the Trump administration and its pro-coup allies in Venezuela.

“Your presence here every day literally gave us the strength to continue to be inside of this building. We have so much love and gratitude for every one of you who was outside facing these violent, racist, homophobic pro-coup people,” Flowers said. “We are saddened that we were unable to hold the embassy until a peaceful path was achieved. But we’re glad that we held it off for 37 days.”