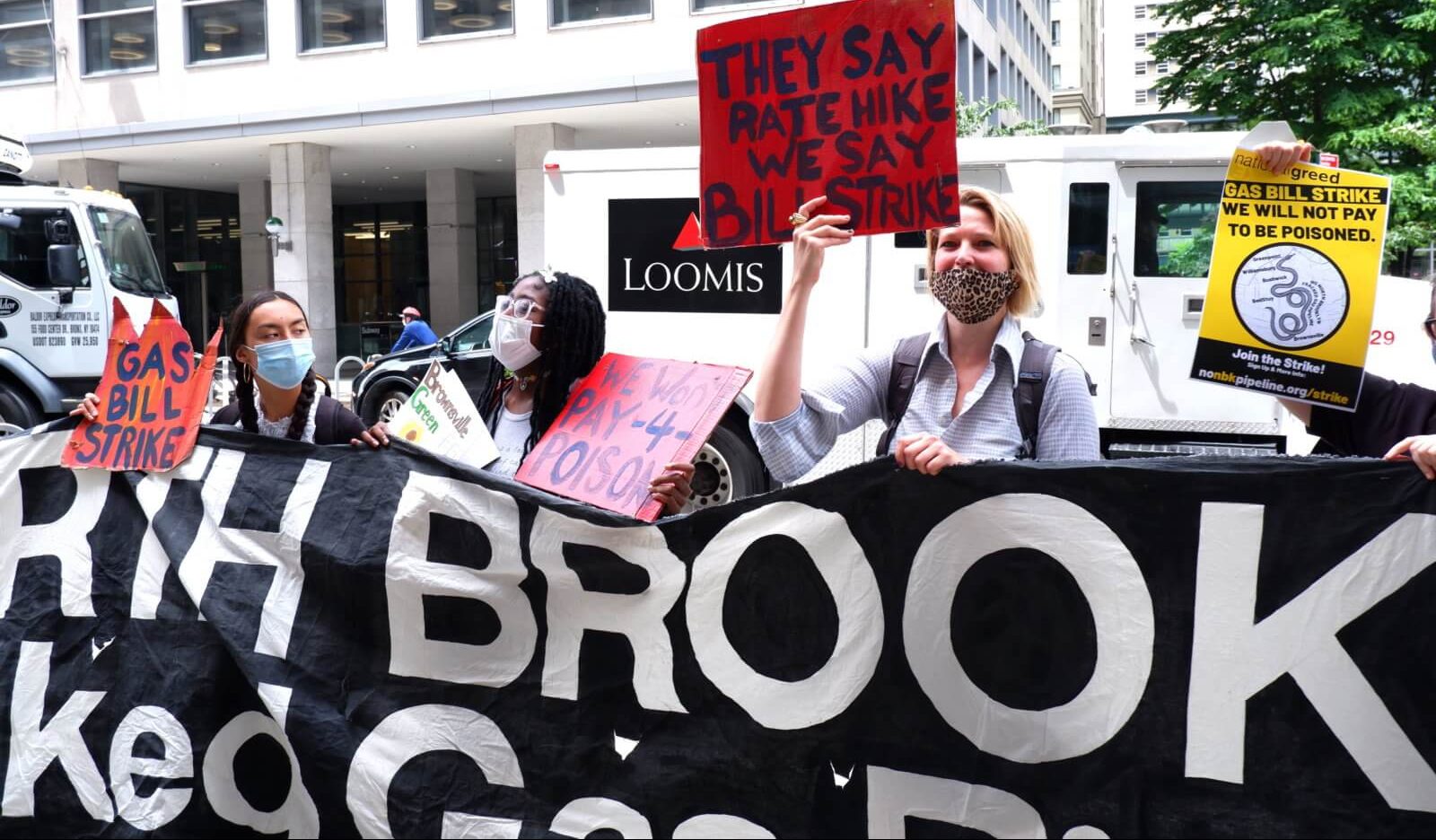 Above Photo: By Kevin Dugan.

Environmentalist launched a gas bill strike Tuesday, pledging to withhold money from their monthly utilities in protest of National Grid’s controversial pipeline project beneath the streets of Brooklyn.

The protest, organized by a coalition of environmentalist groups under the moniker No North Brooklyn Pipeline, called on New Yorkers to keep $66 from their gas bills, the average amount the company’s 1.9 million downstate customers will have to pay in rate hikes to fund almost $129 million in construction costs National Grid wants to recover through increased rates.

The underground tube — officially dubbed the [Metropolitan Natural Gas Reliability Project](https://nationalgridgasprojectsny.com/brooklynmetro/#:~:text=The Metropolitan Natural Gas Reliability,support the area’s economic growth.) – began construction back in 2017, tearing up the streets along its seven-mile route beginning in Brownsville and continuing through Bedford-Stuyvesant, Bushwick, and East Williamsburg, before its final destination which will connect to the company’s Maspeth Avenue depot at Newtown Creek.

National Grid honchos repeatedly stressed the expansion is a worthy investment designed to relieve pressure on its network and spur growth in the areas, but activists have demonstrated against the scheme since early 2020, calling on the company and government officials to instead expand green energy infrastructure and divest from fossil fuels.

Activists turned up the heat when they twice broke into an active construction zone in Williamsburg and locked themselves to the pipeline last fall.

At Tuesday’s rally, one Brownsville activist said her neighborhood where the pipeline begins was already over-burdened by toxic industrial areas.

“My community, historically, has been one that has a lot of industry, that is not good for the environment for people to live in,” said Aderinsola Babawale, an activist with Brownsville Residents Green Committee. “We cannot heal in a place that is spewing out poison, it just don’t make no damn sense. We ain’t paying that damn bill.”

“We think that if we hit them where it actually hurts them — the money, right,” she said. “For too long that National Grid has had the power, but we are now taking the power back with this gas bill strike.”

In a statement, a spokeswoman for National Grid denounced the strike action as “irresponsible” and noted that all its capital investments are reviewed by the PSC.

“Informing customers not to pay their bills is irresponsible and sets a dangerous precedent,” said Wendy Ladd. “National Grid provides natural gas service to our customers and in return, like all utilities, there is an associated cost. Our customers understand the value and reliability that gas service provides.”