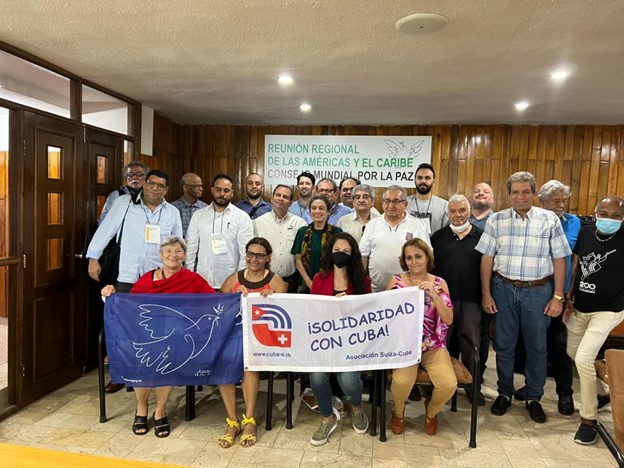 Corporate media and the US state depict Cuba as an isolated and friendless country.

In fact, it is the site of many international gatherings where important messages on world affairs are delivered.

Fraternal greetings to all of our comrades and friends. Thanks to the ICAP and the World Peace  Council for organizing this important VII International Seminar for Peace and the Abolition of  Foreign Military Bases. I am deeply honored to be addressing this important and timely Seminar.

We are holding this important Seminar at the time when our world is going through fundamental  transformations and, as a result, is witnessing dangerous military confrontations, as marked by  the current crisis in Ukraine. This crisis, more than anything else, is a direct result of the U.S.  and European imperialisms’ effort to encircle Russia by the eastward expansion of NATO to the  Russian borders, turning Ukraine into another military base for NATO, and thus causing an  existential threat to the security of the Russian Federation.

Unfortunately, many have fallen for imperialism’s propaganda of one-sided condemnation of  Russia alone for violating the United Nations Charter. There is no doubt that global peace and  security of all nations depends on creation of an international order based on the principles outlined in the UN Charter. But to blame Russia alone for the violation of the UN Charter is to ignore the most important aspects of the history of the world since the destruction of a Socialist state in the USSR in 1991 and the resulting collapse of the socialist camp.

Since then, our world has been witnessing constant violations of the United Nations Charter by  the U.S. and European imperialist powers in their effort to impose their hegemonic domination  over the world. Let us look as some of the examples among many:

— In 1998 for 78 days, NATO attacked, dropped 28,000 bombs, and shattered Yugoslavia into  pieces without the consent of the United Nations.

— In 2001, as a response to the 9/11 attack, U.S. declared an indefinite “war on terror,”  affecting at least 60 countries, including seven targeted for illegal regime change.

— In 2003, U.S. and the members of its “coalition of the willing” illegally attacked and invaded  Iraq in defiance of the UN Security Council.

— In 2011, U.S., UK, and France unilaterally and without the consent of the UN Security  Council attacked Libya and killed its leader, Moammar Qaddafi.

— Starting in 2011, U.S., NATO, and regional allies started a proxy war in Syria by arming and  funding terrorist groups, a war which is still taking innocent lives.

— In 2014, the U.S. staged a coup with the help of neo-Nazi forces in Ukraine and established a  pro-NATO government in there, which led to the massacre of Russian and ethnic Russian  population in eastern Ukraine.

— Throughout this period, the U.S. and its European allies have imposed illegal unilateral  economic sanctions on more than 40 countries of the world, causing the death of hundreds of  thousands of innocent people.

— And, of course, one should mention the illegal occupation and annexation of Syrian and  Palestinian territories by Israel with full support of the United States.

In short, the U.S. imperialism and its allies had already turned the world into a lawless wild west.  Since the September 11, 2001 attack on New York, the U.S., at the instigation of its military industrial complex, had put its war machine into high gear, attacking one country after another  and bringing death and destruction to many countries of the world, especially to those in Latin  America and the Middle East. This period has witnessed the eastward expansion of U.S. and  NATO military bases into 13 European countries and even a westward expansion of NATO into  Latin America by making Colombia a global partner of NATO, and, according to New York  Time, the presence of U.S. military personnel in 173 countries of the world. And on top of all  this, is a trillion-dollar military and war budget to fund the U.S. imperialism’s “full spectrum  dominance” project for the whole world.

In addition to these militaristic policies, decades of imposition of neoliberal capitalist economic  models on other countries — outsourcing of production to other countries at poverty-level  wages, forced economic restructuring, massive privatization of their healthcare and other social  services, removal of their market and environmental regulations, etc., etc. — has created massive  poverty, a health crisis and environmental disaster at the global level.

All these point to the fact that the imperialism has been pushing the world toward a very  dangerous global military, economic, environmental and humanitarian catastrophe — a  catastrophe which demands extraordinary steps on the part of progressive humanity if an  irreversible disaster is to be prevented.

However, with the rise of China as a global economic power, and Russia as an independent  powerful actor on the world scene, it is becoming more and more clear that the U.S. imperialism  is losing its hegemonic control over the direction of world events. The failure of the Neocon  policy of preventing the emergence of another contending power to the unilateral domination of  its U.S. is becoming more and more evident. The decline of the U.S. global power, now  exacerbated by the COVID-19 pandemic, shows that the existing international order under the hegemonic domination of the U.S. imperialism is coming to an end.

It is in a last-ditch effort to reverse this objective global process that the U.S. imperialism has  intensified its confrontations with China and Russia, has resorted to maximum pressure economic sanctions on close to 40 countries, and has intensified its policy of forced regime change against all nations that resist the U.S. hegemony.

Based on the painful understanding that its unilateral domination of the world is coming to an  end, U.S. imperialism is changing its global strategy from Trump’s unilateral “America First” to  Biden’s (and the Democrats’) “NATO First” policy. One important aspect of this “NATO First”  policy is the U.S. effort to co-opt, and even force, the European Union to become a junior partner  in the U.S. military interventions around the world. This, however, does not seem to be easy since  the European countries have now developed strong economic and trade ties with China and  Russia. To pull Europe back, as the case of Ukraine demonstrated, the U.S. has no other option  than creating new conflicts and military confrontations, especially with China and Russia, in  order to create a new Cold War situation in which the European Union is forced to sacrifice its  economic priorities to this new cold war imposed by the United States.

A new realignment of global forces in favor of a more equitable and democratic world order is  underway, and an increasing number of the countries in Africa, Asia, and Latin America are  joining hands to facilitate the emergence of this new order. It is the responsibility of all forces of  peace, justice and social progress to mobilize massive support for this transition.

And one of the first steps in achieving this goal is to eliminate the backbone of imperialism’s  domination of the world, namely, the U.S. and NATO’s more than 800 foreign military bases,  especially the illegal U.S. military base in Guantanamo, Cuba!